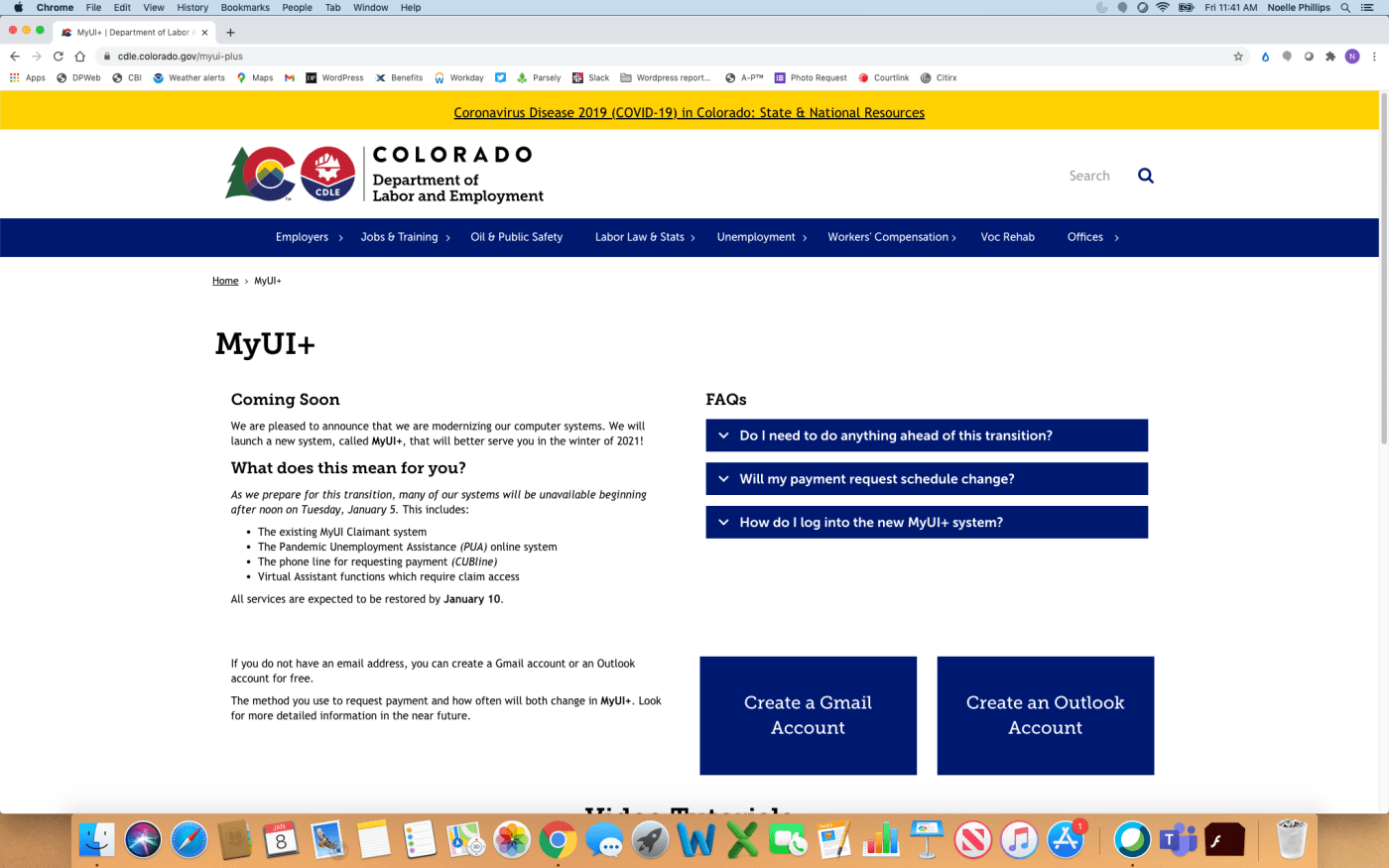 Tens of millions of dollars and years in the making, Colorado’s new unemployment system, MyUI+, launched Sunday morning with some success but also a lot of confusion among users.

The Colorado Department of Labor and Employment announced that by midday Monday more than 100,000 people had accessed the new claims system and more than 43,000 had put in their first request for payments.

Still, some people reported trouble while trying to create a new password and login, especially those with AOL and Yahoo email accounts. And many people who are not eligible to file for claims misunderstood directions that they needed to wait and became frustrated by payment denials.

“Ultimately, it’s headed in a good direction,” said Erin Joy Swank, an unemployed stage manager who moderates a Facebook page about Colorado’s unemployment system. “But, ooof, getting there …” She laughed before she finished the sentence.

The labor department launched the new claims system on Sunday morning; it was a project that took 22 years to come together and cost more than $97 million to complete. The labor department and Governor’s Office of Information Technology hired Deloitte, a giant consulting and professional services firm, to build the system. The department had planned to launch the system in April but delayed it because of the pandemic.

A bulk of complaints about the system on Monday came from people who were unable to reset their passwords and access the system. Those still waiting on password reset emails should check their spam folders. They should not keep resubmitting password reset requests.

“Some email providers, including but not limited to Yahoo and AOL, are experiencing significant delays in delivering emails from the MyUI+ system for password resets,” the department or labor wrote in an update Sunday. “Unfortunately, this is an email provider issue.”

But Lewis Hachmeister, who lost his job as a restaurant cook on Jan. 5, said he was unable to reset his password using a Gmail account. He said he would enter his information and it would tell him to go to his email for a code but then he would be rejected with a message that read, “invalid information.” He was at a loss as to why he kept getting that message.

“You try and fail three times and you get locked out,” he said. “You have to call somebody on the phone and they can’t help you.”

After almost two hours on hold, Hachmeister finally reached someone through a call center hotline only to be told to call back at 8:30 a.m. Tuesday.

“I have almost no hope that at 8 a.m. they’re magically going to have this new system figured out,” he said. “It doesn’t seem possible to me.’’

Meanwhile, he and his wife, who still has a job, will pinch pennies to pay their bills.

Labor department officials on Monday emphasized again that the new claims system is only set up to serve people collecting traditional state unemployment benefits. The thousands of Coloradans enrolled in the federally funded Pandemic Unemployment Assistance, or PUA, and Pandemic Emergency Unemployment Compensation, or …read more

Trump's business recovering may depend on him apologizing to Americans