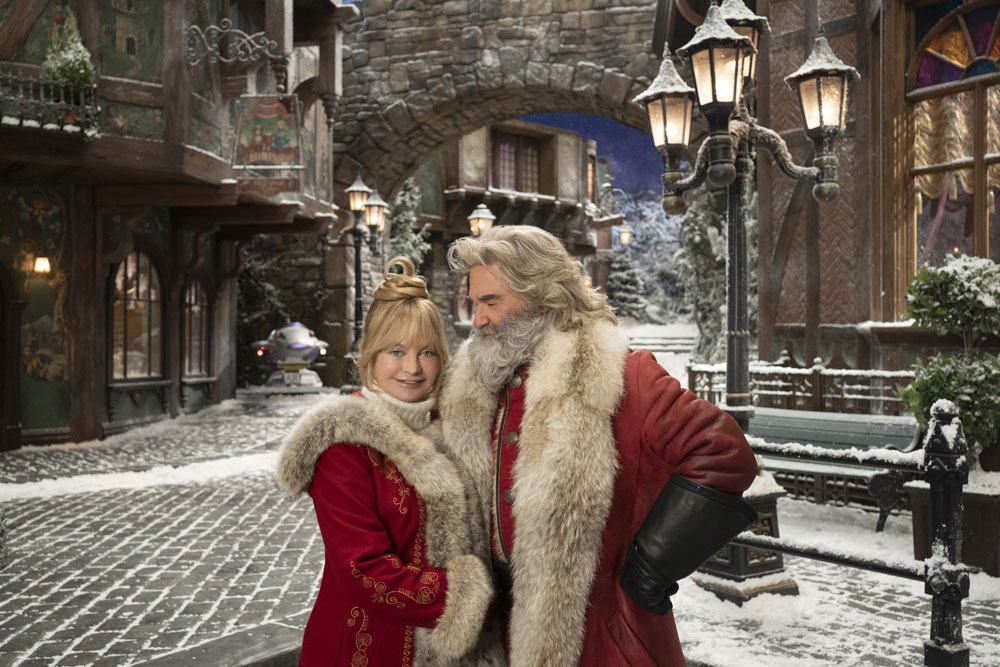 Embed from Getty Images
Kurt Russell reprises his role as Santa Claus for Netflix’s The Christmas Chronicles: Part Two. I saw Part One and kind of liked it. The best part was Goldie Hawn’s cameo as Mrs. Claus at the end so I’m in luck because Goldie is Kurt’s co-star this time. This is the pair’s first time co-starring together since Overboard in 1987. To promote the film, they gave a joint interview to the New York Times. The interview was cute, until the reporter turned to politics. She asked him about his past statements that actors shouldn’t talk about politics and whether he still agreed. Kurt, who unbeknownst to me identifies as a “hardcore libertarian”(!) said absolutely, that it was an actor’s job to remain as generic as possible in the public eye.

Kurt, you’ve said in the past that celebrities shouldn’t really weigh in on politics. Do you still feel that way?

RUSSELL Totally. I’ve always been someone who felt we are court jesters. That’s what we do. As far as I’m concerned, you should step away from saying anything so that you can still be seen by the audience in any character. There’s no reason entertainers can’t learn just as much as anybody else about a subject, whatever it is. But I think that what’s sad about it is that they lose their status as a court jester. And I’m a court jester. That’s what I was born to do.

RUSSELL A court jester isn’t always funny. A court jester is the only one who can walk into the castle and put the king down as long as he doesn’t hit too close to home. I think that’s been a big, important part of all cultures throughout history, and I’d like to see it stay in ours.

Kailyn Lowry: My Mom is Fake and Phony and the Absolute Worst!

HAWN But we did have a president who was an actor, Ronald Reagan.

RUSSEL Like I said, actors can learn as much as anybody else can.

HAWN Well, I’m just saying Reagan definitely was a well-known actor. I think it’s a personal choice whether you want to get into that. The one thing I don’t agree with is that just because we have a platform we always have to use it. That is our choice.

I don’t agree with Kurt, but I understand his thought process. It ties in with separating the artist from the art, which I guess Kurt doesn’t think the audience can do. I’d have a hard time watching a movie in which James Woods played Jimmy Carter because of each man’s politics (and general moral code). I mean, if Kurt came out and said, “hey, I support the guy that put babies in cages!” I probably wouldn’t want to see his Santa Claus film. But, I do think there are exceptions, especially in extreme cases like the last four years. As Goldie said, actors have an incredible platform and when faced with hatred and bigotry, I agree, they should …read more