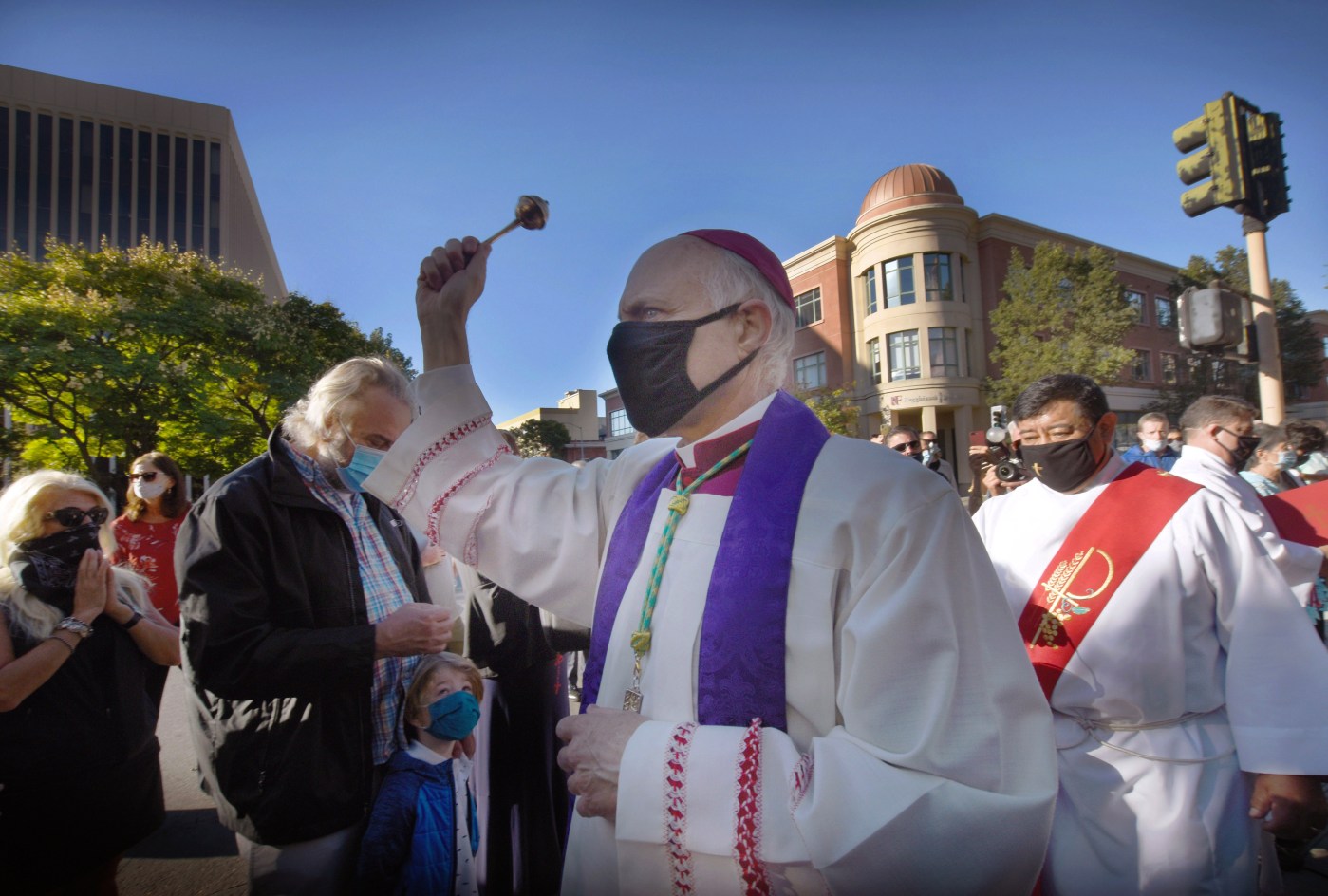 The Archbishop of San Francisco on Saturday performed an exorcism in front of a San Rafael Catholic church at the site where protesters tore down a statue of a Spanish missionary.

Archbishop Salvatore Cordileone held the exorcism outside of St. Raphael’s Church Saturday morning before performing Mass in honor of the 40 Days for Life movement, an anti-abortion campaign. Following Mass, pro-life supporters marched to the Planned Parenthood clinic in downtown San Rafael and said the rosary.

The exorcism came in response to a protest for Indigenous Peoples Day on Monday in which a group of demonstrators toppled the church’s statue of Fr. Junipero Serra. The demonstrators said Serra, an 18th century Catholic priest who founded nine of California’s missions, contributed to the destruction of Native American cultures.

Mike Brown, a spokesman for the Archdiocese of San Francisco, said the exorcism was an attempt to bless the area where the statue once stood.

“The idea is that there was evil present, either during that event or because of that event, so he’s driving that away with prayer,” Brown said.

San Rafael police on Monday arrested five people accused of felony vandalism in connection with the destruction of the statue.

Almost 50 people attended the demonstration, which took place on the federally recognized Columbus Day holiday, to protest against the colonization and treatment of Native Americans.

About 30 minutes into the protest, a small group of demonstrators removed protective tape that was covering the Serra statue and threw red paint on it. The demonstrators also covered the statue with spray paint and wrote the word “rape” on it.

Ask Amy: How can I keep them from finding the mortifying things I wrote?

Protesters then tied straps around the neck of the statue and pulled it down, breaking it at the ankles.

According to Brown, church leaders were not asked by the demonstrators to take down the Serra statue prior to the protest. Cordileone has denounced the incident, saying in a written statement that the statue was “mindlessly defaced and toppled by a small, violent mob.”

“This kind of behavior has no place in a civilized society,” Cordileone said, noting that other Catholic statues have recently been destroyed. A group of protesters in June toppled a statue of Serra in San Francisco’s Golden Gate Park.

Such incidents should not be “treated as small property crimes,” Cordileone said.

“The symbols of our faith are now under attack not only on public property, but now on our own property and even inside of our churches,” he said. “We cannot allow a small, unelected group of lawbreakers to decide what sacred symbols we Catholics or other believers may display and use to foster our faith.”

Cordileone said Native Americans “suffered under Europeans who came here and their descendants, especially after the mission era ended and California entered into the United States.” But Serra, he said, should not be seen “as the icon of oppression of the Indians.”