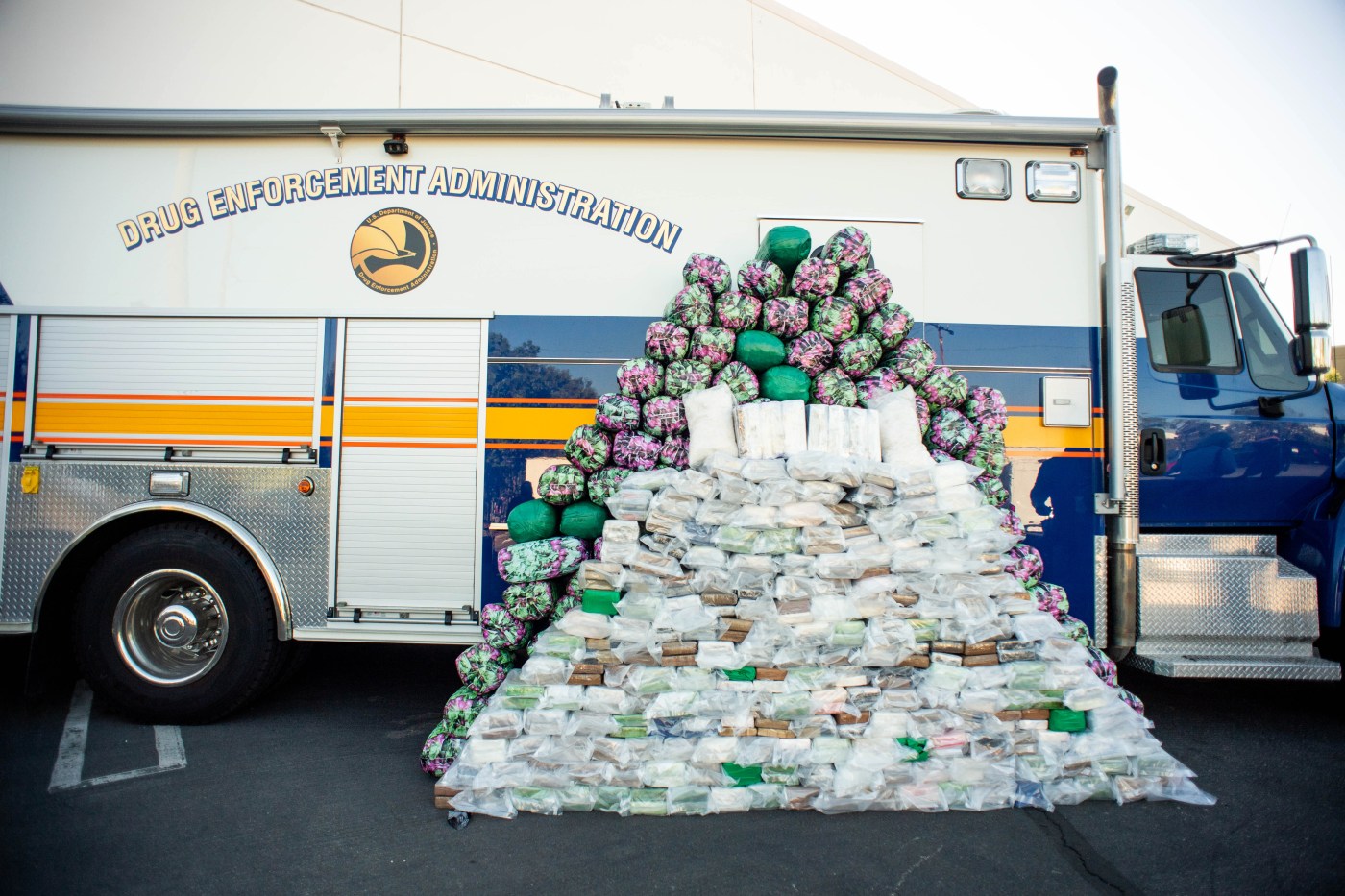 Piled 10 feet high and resting against a large truck, hundreds of packages containing methamphetamine, heroin and cocaine were put on display Wednesday, Oct. 14, as Drug Enforcement Administration officials announced a pair of their biggest busts ever.

A pair of recent investigations led to the seizure of more than 5,200 pounds of methamphetamine, believed to be tied to the Sinaloa Cartel in Mexico, said Timothy Shea, acting administrator for the DEA.

The first bust netted more than 2,200 pounds of methamphetamine, 893 pounds of cocaine and 13 pounds of heroin – found, authorities said, in a stash house in Perris and another in Moreno Valley on Oct. 2.

The drugs were on the floor of the two homes, Shea said during a press conference in Montebello, home to one of the federal agency’s facilities.

In Moreno Valley, investigators found methamphetamine, cocaine and heroin in 25 duffel bags in the garage, officials said, but the bulk of the seized drugs were found at the stash house in Perris.

The drugs found have a wholesale value of $18 million, DEA spokeswoman Nicole Nishida said. It was the DEA’s largest methamphetamine haul inside the United States.

In the second bust, on Oct. 9, officials confiscated more than 3,000 pounds of methamphetamine, 29 kilograms of heroin, 13 kilograms of fentanyl powder and 16 kilograms of counterfeit pills laced with fentanyl at the Otay Mesa Port of Entry on the Mexican border, southeast of downtown San Diego, Shea said.

Officials said that was the DEA’s second-largest find of meth at the border, with all of the drugs in this seizure having an estimated total value of $7.2 million.

“These two seizures are more than enough to provide a dose of meth for every man, woman and child in the United States and Mexico,” the special agent said. “It’s a massive amount.

“These seizures are significant, not just because of the shear volume, but because it’s a sign of a deeply concerning trend,” Shea continued. “Meth is pouring into the United States through our southern border and is destroying too many communities and, more importantly, too many lives.”

A tip from an informant led agents to identify a man who was acting as a courier and stash house manager at a home in Moreno Valley, said Bill Bodner, special agent in charge of the DEA’s Los Angeles Field Division.

Fontana police investigators conducted surveillance and detained him after he was spotted with an associate handing two duffel bags to a third individual at a Sam’s Club parking lot in Moreno Valley, Oct. 2. Agents then got search warrants for the two homes, Bodner said.

Shea declined to comment on how high up the chain of command the suspect was within the cartel, but said the quantity of drugs was significant.

“Someone with this amount is someone who is very, very trusted by the cartel,” he said. “These are high-level individuals and there will be more arrests as these investigations continue.”