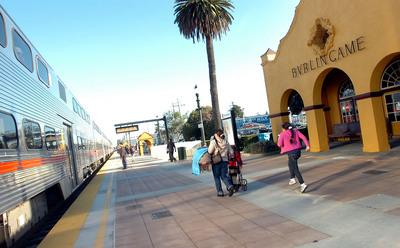 BURLINGAME — Two vehicles with people inside were struck by a Caltrain Friday evening, authorities said.

The collision happened around 4:40 p.m. on tracks at the Broadway Avenue grade crossing, Caltrain said in a statement.

After northbound train No. 159 with 45 passengers and 10 bicycles aboard struck the vehicles with six people inside, all other trains were halted nearby and first responders were on scene, Caltrain said.

There were no immediate reports of injuries.

Delay: #NB159 has struck a vehicle at Broadway Ave right before the Broadway Station. More details to follow.

Main track 2 has been cleared for restricted speed between Burlingame and Broadway.

Update: #NB159 has been terminated. #NB261 will be accommodating #NB159 passengers making all local stops.