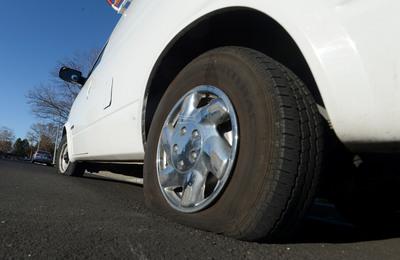 Q: Is this a Caltrans road scam?

I had a blowout on Interstate 880 as I returned to Santa Clara County from Berkeley recently.

I was driving slowly in the right lane when I hit a long stretch of deep ridges in the road, couldn’t move over, heard funny sounds. Then – metal. I pulled over to the side, and my tire was gone, splotched all over the road. In front of me were several other tires in the same condition.

After hearing many stories from friends who’d had similar experiences, I filed a complaint with Caltrans.

Result: Complaint denied. Appeal denied. No reasons given. Caltrans told me I’d have to go to small claims court and that I would likely lose because there had not been any official complaints posted, including mine.

A: Caltrans receives 4,000 claims a year for vehicle damages under $10,000, but only 1 in 10 are upheld. You can file a second claim or contact your auto insurance agent, who may be able to help navigate through the claim process. If there have been a number of complaints filed with Caltrans on this stretch of road, your chances are greater of having a claim approved.

A claim can be filed for losses you believe were caused by the action or inaction of Caltrans. On average, Californians pay $762 per year for damages caused by bad roads. But in Los Angeles and the Bay Area, according to AAA, the repair cost of poor roads is higher, at more than $1,000 per motorist per year.

Q: Thanks, Mr Roadshow. I saw your answer about what to do with leftover paper BART tickets. Shortly thereafter I packaged mine for a refund (some dating back to the turn of the century, I suspect). I received a check from BART today for a total of $37. They even included three small-value tickets ($2.05 for those three).

California woman on trial after going maskless in grocery store

A: BART has ended the sale of paper tickets from its vending machines. Fare gates still accept paper tickets that are loaded with funds. Using cash at an Addfare machine located in the paid area of each station, riders will be able to add enough fare to a paper ticket to exit a station.

‘Move over’ law is dangerous, says an ex-CHP officer: Roadshow

20 years without a front license plate? These drivers say they have that beat: Roadshow

That ‘FasTrak gift card’ is really a scam: Roadshow

An insider tells story of interchange at I-680 and Highway 4: Roadshow

Another option is a refund. BART will refund paper tickets with a remaining value greater than $1.

A station agent can help process a …read more