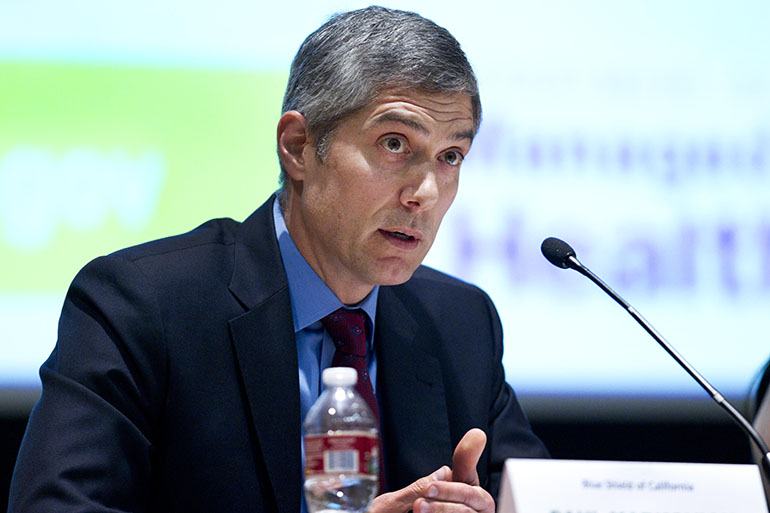 As the national COVID-19 vaccination campaign ramped up in March, with increasing supplies allowing more people to become eligible for the shots, California tapped Oakland-based health plan giant Blue Shield to oversee vaccine distribution statewide with the promise of streamlining the thousands of the disparate efforts by counties, clinics and hospitals.

The move was met with a barrage of criticism. County officials in the Bay Area and Southern California who had spent months honing their local distribution systems balked at handing control over to the private health care provider.

As a result, many signed deals with the state that would allow them to continue running their own vaccination programs. Blue Shield’s no-bid deal, worth up to $15 million in reimbursements, also drew fire from critics who noted the company’s contributions to Gov. Gavin Newsom’s political campaigns and pet projects.

Last week, Blue Shield Chief Executive Officer Paul Markovich answered questions from this news group about the organization’s role. Questions and responses have been edited for brevity and clarity.

Q: People are getting their shots from many places – long-term care facilities, pharmacy chains, regional health care providers like Kaiser and Sutter, county health departments, community clinics, federally run mass vaccination sites like at Oakland Coliseum. Which of these does Blue Shield play a role in?

Q: What is your response to county health officials who have argued that Blue Shield had no experience with the scope of work needed to oversee vaccination, provided no value to residents, and pushed people to use the state’s MyTurn appointment system that didn’t work very well?

A: We like to be very data-driven in these things, more objective in our conclusions about performance. We signed up in our contract to perform in terms of improving equity, establishing a network of a certain level of capacity and reach. When we go down the list of what did we sign up to do and what did we do, we’ve achieved all of our goals at this point.

California when we started was lowly rated. We now have over 58% of Californians with at least one shot, California is now 10th among the 50 states. It’s improved a lot since we started.

Q: Did Blue Shield provide any benefit for the counties, including most in the Bay Area, that signed direct deals with the state for vaccine distribution rather than working with Blue Shield?

A: The vast majority of counties signed a memorandum of understanding with the state, but that understanding was really no different than the contract with Blue Shield. It wasn’t …read more

Marvel Studios & Disney+ | SUPER BOWL 2021 | Promo
US may be turning a corner on Covid-19. Here’s when we could see cases and deaths plummet, expert says
SHARES
ShareTweet