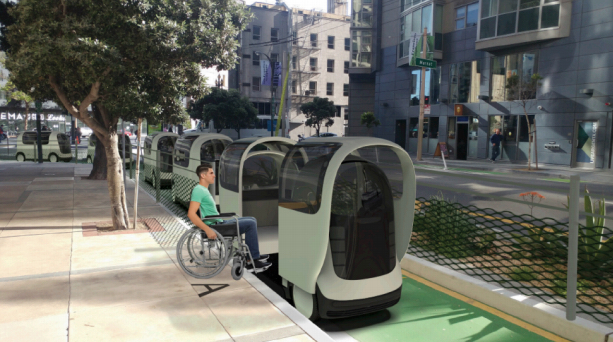 Pittsburg has hopped aboard an initial plan to build a regional personal micro-transit system that will use driverless electric cars to shuttle passengers to and from Bay Area BART, bus and Amtrak stations in East Contra Costa.

The City Council on Monday unanimously agreed to lend its preliminary support to the public-private partnership model for Glydways Inc. to build a multi-million-dollar micro-transit network that would complement current bus and rail transit in the region and be fully operational by 2030. Other East County cities and the Contra Costa County have also initially agreed to support the regional transit project.

Under the agreement, the city will work with other private and public agencies to help develop the integrated regional transportation system that is being billed as convenient, affordable on-demand transit. Once operational, customers would hail the cars through a phone app or from kiosks along the routes.

The South San Francisco-based company first proposed the concept in East Contra Costa more than a year ago in Oakley. Since then, Pittsburg, Oakley, Brentwood, Antioch Contra Costa County, and the East and Contra Costa Transportation authorities have collaborated on a feasibility study to ensure that the plan, which requires minimal local funds, will benefit the region.

“This project is as much as it’s about economic development and attracting employers as it is a transportation project project,” Habib Shamskhou of Advanced Mobility Group, which conducted the study, said.

Advanced Mobility Group concluded the proposed 28-mile transit system with 56 boarding locations planned between Pittsburg/Bay Point BART Station and downtown Brentwood is viable. It estimated it would attract 33,559 daily weekday ridership and an average of 5,196 riders daily on weekends.

Glydways proposes to design and build the $450.9 million Pittsburg-to-Brentwood system, partnering with other firms to finance it and using fares and other revenue sources to operate it. In contrast, building eBART’s tracks and diesel engines for the Pittsburg-to-Antioch line cost $525 million while that same 10-mile two-way track for a Glydways’ system would cost $89.5 million in 2021 dollars, according to the study.

Under Glydways’ proposal, small driverless electric cars will initially operate on demand along paved pathways linking riders to and from points such as Los Medanos College, the Amtrak station and park-and-ride lots to BART, the Brentwood Innovation Center and Streets of Brentwood shopping center. The operating space can be created from repurposed roads, abandoned railroad, capped canals, or newly built elevated pathways, according to the report.

And, while extending BART or other transit systems could take more than a decade to complete, the micro-transit system would take only five years to construct, Shamskhou said.

“It is highly sustainable and can be achieved in a speedy deployment with public-private partnership,” Shamskhou told the council.

“And the biggest advantage is that it will improve the productivity of the Tri Delta Transit (bus) fixture,” …read more