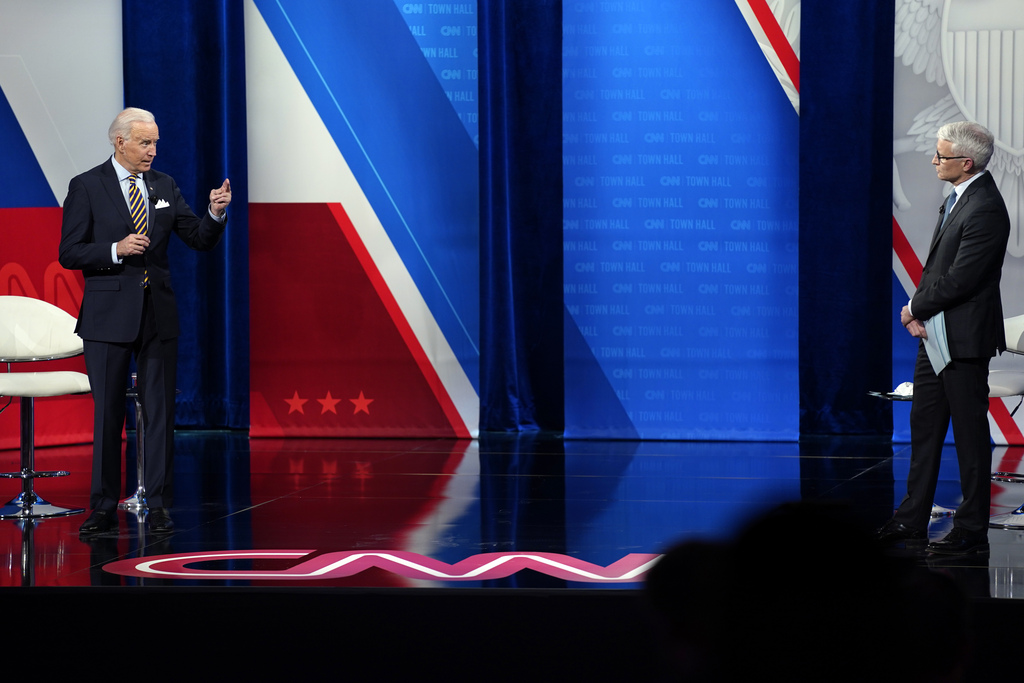 President Joe Biden took questions from Wisconsin residents and from Anderson Cooper at a CNN town hall event in Milwaukee on Tuesday night.

We’re still looking into some of the claims Biden made, so this article is not comprehensive. But we can tell you now that he made at least four false claims — all of them involving statistics — about the minimum wage, undocumented immigrants, China’s economy and Covid-19 vaccinations.

Biden also made claims that could have benefited from some additional context, that he acknowledged he might not have gotten right or that there is not solid evidence for. Here is a breakdown:

Biden said the $7.25 per hour federal minimum wage is too low, then said soon after: “For example, if it went — if we gradually increased it — when we indexed it at $7.20, if we kept it indexed by — to inflation, people would be making 20 bucks an hour right now. That’s what it would be.”

Facts First: This is false; the White House told CNN after the event that Biden got mixed up with another statistic about the minimum wage. Today’s federal minimum wage of $7.25 per hour, which took effect in 2009, would not be even close to $20 per hour if Congress had decided to link it to inflation. Adjusted for inflation, $7.25 in January 2009 was equal to $8.98 in January 2021.

The White House told CNN that Biden was attempting to refer to a claim, from a progressive think tank about how the minimum wage would have been $24 per hour in 2020 if the minimum wage had kept pace with productivity growth (not inflation) since 1968 (not 2009).

Biden said of the US population of undocumented immigrants: “The vast majority of the people, those 11 million undocumented, they’re not Hispanics; they’re people who came on a visa — who was able to buy a ticket to get in a plane and didn’t go home. They didn’t come across the Rio Grande swimming…”

Facts First: Biden was wrong to claim that the majority of undocumented immigrants in the US are not Hispanic. While it is obviously difficult to compile comprehensive statistics on this population group, the Migration Policy Institute think tank estimated in 2018 that 73% of undocumented people in the US speak Spanish at home and 68% are from the Mexico and Central America region, with an additional 7% from South America. The Pew Research Center has found that the Mexican share of the undocumented population has fallen over time, but that people from Latin America still made up 77% of the 2017 undocumented population.

Biden was more correct with his second claim, about the means by which undocumented people are arriving in the US. A 2019 study by the Center for Migration Studies of New York, based on 2017 data, found that, for the seventh straight year, more newly undocumented people overstayed visas than crossed a border illegally; it was 62% overstays and 38% illegal crossings, according …read more