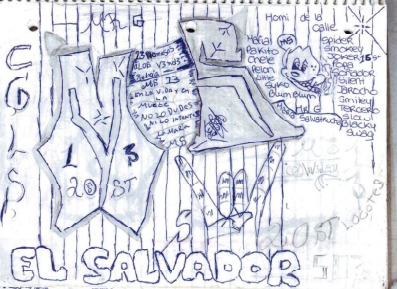 SAN FRANCSICO — It has been nine months since federal authorities rounded up 17 suspected MS-13 members were rounded up and hit with racketeering charges alleging assaults on rival gangs, and attempts to “tax” drug dealers within the city.

But while the defendants spend their time in Santa Rita Jail, still legally presumed innocent, not much progress has been made toward bringing the case toward trial or some other resolution, according to several attorneys who spoke out in court at a Tuesday morning hearing. They’ve accused federal prosecutors of lagging at turning over evidence collected from recorded jail calls and cell phone drains that they say is needed to provide a competent defense.

“We’re just stymied…I have to say it’s frustrating,” said Peter Arian, the attorney for Edwin “Muerte” Alvarado Amaya, who is accused of attempted murder and racketeering, at Tuesday’s court hearing. “When the government says ‘We’re diligently moving forward, we produced 25 phone calls that we’d like to use,’ that in my mind — for an entity with virtually unlimited resources that chose to file the case this way — that’s not progress.”

Arian’s comments were echoed by several other defense attorneys in the case, who say they’ve yet to see key evidence that allegedly implicates their clients in a number of violent crimes, mostly stabbings or other melee attacks, which federal prosecutors say were part of an effort by an MS-13 subset known as the 20th Street clique to extort Tenderloin drug dealers and conquer territory from the rival Norteño gang.

Harriette Cole: I shared something I didn’t realize was a secret, and all hell broke loose

In court Tuesday, assistant U.S. Attorney Aseem Padukone said he’s sympathetic to the defense concerns. Part of the reason for the stall, he said, was a COVID-19-related shutdown of a tech lab tasked with downloading data from the defendants’ smart phones. The process of translating jail calls from Spanish to English has also slowed things down, he said.

“We expect the pace to pick up,” Padukone said in court Tuesday. But he added, “We’re not yet in a place where we can provide a concrete timeline, as of today.”

The charges against the defendants include multiple attempted murders, as well as allegations that several defendants communicated with MS-13 members in Los Angeles about plans to “murder of two ‘rogue’ MS-13 members, all on the instruction from higher-ups in El Salvador.” They also include a 2015 shooting of an alleged Norteño member, which was followed by a successful police chase; the alleged driver escaped police by going the wrong way down the Vermont Street offramp on Highway 101.

Most of the alleged attempted murders and assaults, though, involve knives, bats, machetes, and in one instance, a mop handle. In court records, federal prosecutors have detailed several attacks on suspected Norteño members, including an attack outside a San Francisco pizza parlor where one alleged MS-13 member stood watch, machete in hand, while others used blunt objects — like a plastic water cooler — to beat the victim.

In another instance, in November 2017, Elmer “Gordo” Rodriguez allegedly shot a man in the chest …read more