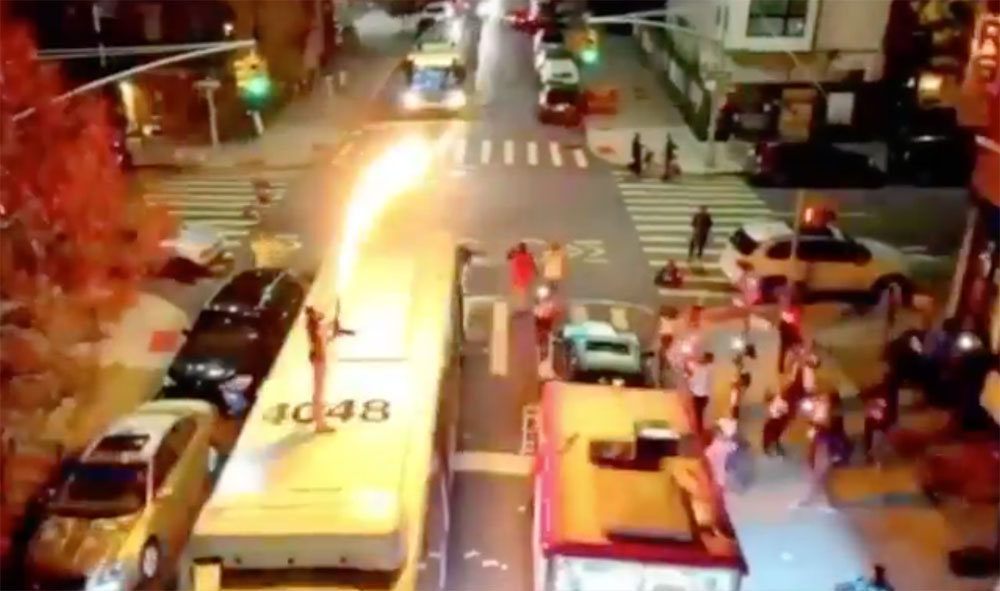 NEW YORK (AP) — The man who shot off a flamethrower while standing on an occupied New York City bus has surrendered to police.

Police said the man — a musical artist who goes by the name Dupree G.O.D — was arrested Wednesday on charges of reckless endangerment and criminal possession of a weapon. There was no information on when he would be arraigned.

As he was taken into police custody, he told reporters, “It was for the art.”

He had earlier said the unauthorized Nov. 8 stunt was part of a tribute video for the hip-hop group Wu-Tang Clan.

The clip gained attention on social media after a police union tweeted it this week as an example of the city becoming less safe. That tweet was later removed, but Dupree G.O.D had tweeted his own version on Nov. 10.

The New York Post reported that his attorney Cary London issued a statement saying the stunt was controlled. “This was artistic expression in a controlled environment where no one was hurt,” London said.

“Let me ask you something, jumping on a bus, is that a controlled environment?” he said at a press conference. “And also, mind you, there were people on the bus as well, so I don’t know about you but, if my mother’s on that bus, and somebody’s on the roof shooting a flamethrower, I don’t know, but I’m gonna take that a little personal.”

There were reportedly 25 passengers on the bus, on the MTA’s B-26 route, at Putnam and Franklin avenues in Brooklyn’s Bedford-Stuyvesant neighborhood. They were let off at the next stop and picked up by the next bus on the route. No injuries were reported.

Hunter impaled by antlers of deer he had killed

California fugitive attempts James Bond-like underwater escape. His bubbles give him away.