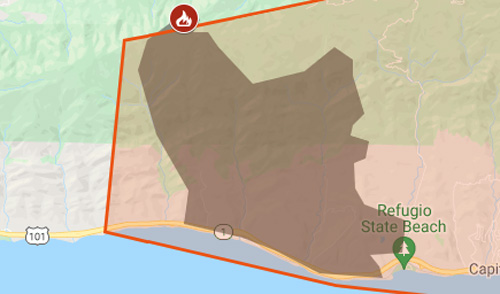 The Alisal Fire, which was discovered Monday afternoon, has forced evacuations in Santa Barbara County and the closure of Highway 101.

The fire started in the hills south of Alisal Lake and spread south to the coast, said the report from Los Padres National Forest fire managers.

On Tuesday morning, its size was estimated at more than 6,000 acres (10 square miles). The approximate perimeter is shown in gray on the map above.

Highway 101 is closed between the Highway 1 junction in Las Cruces and the west edge of Goleta.

For updates, including evacuation warning areas, see the map below or go to the Santa Barbara County emergency site.

How much do wildfires really cost California’s economy?