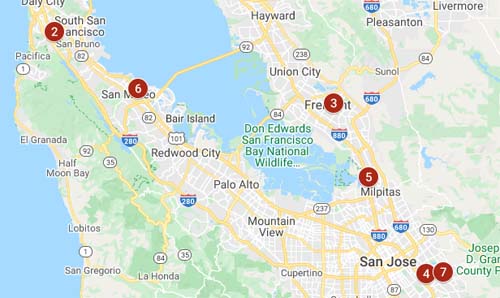 With both the Mega Millions and Powerball jackpots over $500 million for only the second time, every lottery sign in a convenience store window can look like a harbinger of luck.

But in the Bay Area, only seven stores have actually sold a ticket that won a Mega Millions or Powerball jackpot — and three of them are now defunct.

Here are the lucky retailers:

2 November 2009: Pak ‘N Save, South San Francisco, $38.5 million. Lourdes Salinas had one of two winning Mega Millions tickets. The Pak ‘N Save space on Gellert Boulevard is now occupied by a Safeway.

3 July 2012: Kwik & Convenient Liquor Mart, Fremont, $52 million. Marita and Bladimir Agnite didn’t come forward for weeks — because they didn’t know they had the ticket. When the lottery released a surveillance camera image of the presumed Mega Millions winner, a family member called to tell them to check their numbers.

4  December 2013: Jenny’s Gifts & Kids Wear, San Jose, $324 million. Steve Tran, who identified his residence only as “Northern California,” had one of the two winning Mega Millions tickets, which he bought when his work as a truck driver brought him to San Jose. The Jenny’s store on Tully Road is now closed.

5 February 2014: Dixon Landing Chevron, Milpitas, $425 million. B. Raymond Buxton, also from an unspecified Northern California community, claimed the Powerball prize on a ticket he bought while getting a Subway sandwich inside the station. He didn’t reveal his age or former occupation, and he held the big check in front of his face for his official winner’s photo.

6 September 2014: Key Market, San Mateo, $228 million. Vinh Nguyen, a nail salon worker, had the only winning Powerball ticket. The  Key Market on Norfolk Avenue has been replaced by a Chavez Supermarket.

7 July 2018: Ernie’s Liquors, San Jose, $543 million. The one winning Mega Millions ticket was held by 11 co-workers at a Wells Fargo bank. It was the second-biggest single-ticket Mega Millions win ever.

In addition to the seven, San Jose financial analyst Daniel Bruckner won a $208 million Mega Millions jackpot in 2011, on a ticket he bought while visiting family for the holidays on Long Island, N.Y.

Mega Millions draws are on Tuesday and Friday, Powerball on Wednesday and Saturday.