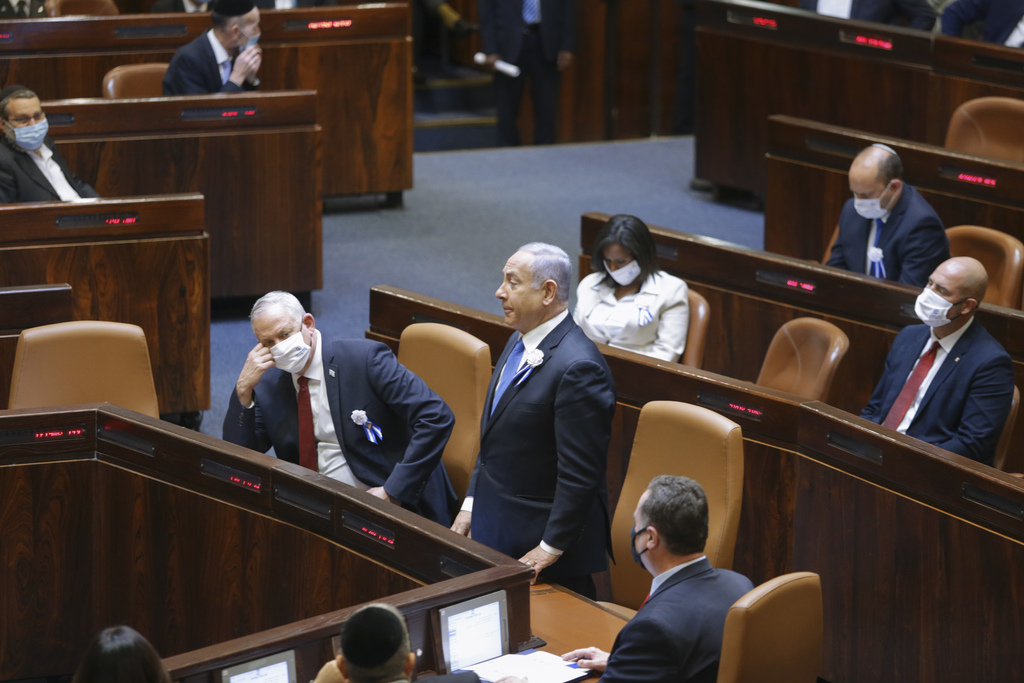 But with the newly elected parliament deeply divided and the prime minister on trial for corruption charges, Netanyahu had little to celebrate.

He now has up to six weeks to lure his political foes into a coalition, an effort that appears to have slim odds of success. At the same time, those opponents will be working to form an alternative government that could end his 12-year reign.

In a meeting with members of his Likud party, Netanyahu struck a statesmanlike tone, saying he would be the prime minister of all of Israel’s citizens, Jewish and Arab, religious and secular.

“We will take care of everyone,” he said, vowing to “take Israel out of the cycle of recurring elections and to establish a strong government for all citizens of Israel.”

President Reuven Rivlin turned to Netanyahu in the wake of Israel’s fourth inconclusive election in the past two years.

In a post-election ritual, Rivlin had consulted Monday with each of the 13 parties elected to the Knesset, or parliament, in hopes of finding a consensus on a candidate for prime minister. But neither Netanyahu, nor his main rival, Yair Lapid, received the endorsement of a majority of lawmakers.

As he announced his decision Tuesday, an anguished Rivlin said no candidate had the support needed to form a majority coalition in the 120-seat Knesset. He also noted that there are many misgivings about Netanyahu remaining in office while on trial.

Yet he said there was nothing in the law preventing Netanyahu from continuing as prime minister and said he believed that Netanyahu had a better chance than his rivals of cobbling together a coalition.

“This is not an easy decision on a moral and ethical basis,” Rivlin said. “The state of Israel is not to be taken for granted. And I fear for my country.”

Netanyahu did not attend Tuesday’s announcement, as is tradition, and later Rivlin did not appear with Netanyahu in the usual photo of the new parliament’s swearing-in — moves local media interpreted as a show of the president’s unhappiness with the situation.

Netanyahu now has an initial period of 28 days to put together a coalition, a period that Rivlin could extend for an additional two weeks.

Netanyahu has received the endorsement of 52 lawmakers, more than his rivals, but still short of the 61-seat majority needed to form a government.

Securing the support of nine more lawmakers will not be easy. Netanyahu will use his formidable powers of persuasion, coupled with generous offers of powerful government ministries, to court his potential partners.

Netanyahu will likely require the backing of Raam, a small Arab Islamist party. Raam’s leader, Mansour Abbas, has left the door open to cooperating with Netanyahu if he aids Israel’s Arab sector, which has long suffered from crime, discrimination and poverty.

But one of Netanyahu’s allies, the …read more