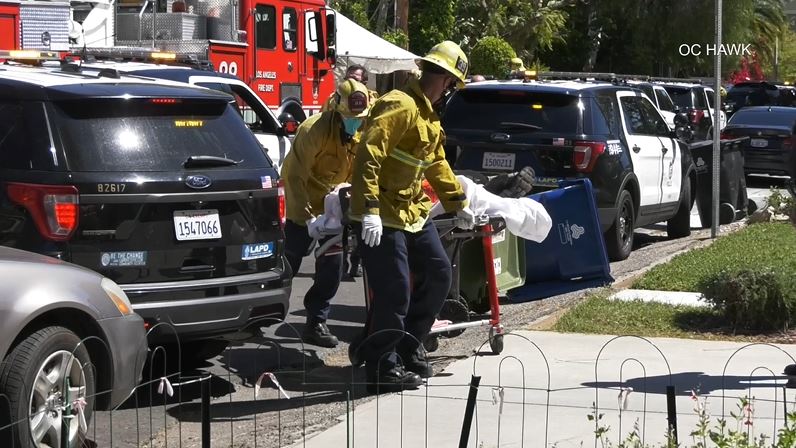 An off-duty LAPD officer and suspect were wounded Wednesday afternoon during a shootout at the officer’s Sherman Oaks apartment, where he confronted an individual who had broken into his vehicle and was attempting to steal his police gear, authorities said.

Officers swarmed the Sherman Oaks neighborhood around 2:25 p.m. in the 5200 block of Vesper Avenue after the shooting was reported, said Los Angeles police Officer William Cooper, an LAPD spokesman.

Investigators learned the off-duty officer wearing plainclothes found a man sitting in the officer’s personal vehicle, wearing his department bulletproof vest, said Los Angeles Police Chief Michel Moore. The off-duty officer confronted the man, which led to an altercation and then a gunfight between the two.

An off-duty LAPD officer and a theft suspect were both wounded in a gun battle at the officer’s Sherman Oaks apartment on April 28, 2021. Pictured are fire paramedics tending to the wounded suspect. (Photo by Leo Kaufman, OC Hawk)

An off-duty LAPD officer and a theft suspect were both wounded in a gun battle at the officer’s Sherman Oaks apartment on April 28, 2021. (Photo by Leo Kaufman, OC Hawk)

During the shooting, the officer used a backup firearm while the suspect used the officer’s primary firearm, which the officer kept inside his vehicle, Moore said.

The shootout started at the garage, then continued through the garage, toward the back of the apartment complex and into a breezeway where the suspect collapsed, Moore said.

One resident living nearby said she heard at least 10 loud pops ring out in the neighborhood, she told reporters at the scene following the shooting.

The off-duty officer retrieved his gun from the suspect and went to check on his friend, who had been with the officer during the incident and witnessed the shooting, Moore said.

When officers arrived at the apartment, they found the officer lying with multiple gunshot wounds, Moore said. Officers then found the suspect, who continued to lie injured in the breezeway, tossing firearm magazines from the officer’s gun over a fence.

Court to hear appeal from Dallas officer who killed neighbor

Both were transported to local hospitals where they were listed as stable, Moore said. The officer was struck in the chest and thigh and was undergoing surgery. The …read more