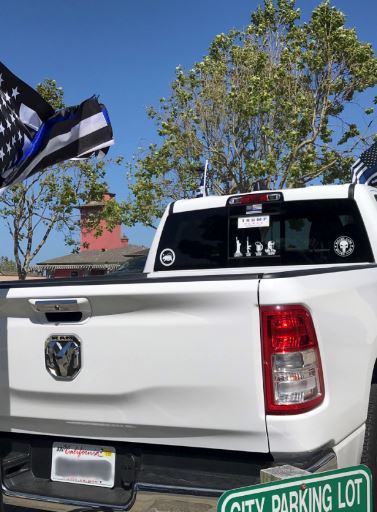 PACIFIC GROVE — A Pacific Grove police officer was fired for behavior that began with posting right-wing extremist decals on his private car and ended with the officer posting obscenity laden comments against Black Lives Matter on a right-wing social media platform.

In a video-taped news release, Pacific Grove Police Chief Cathy Madalone said the officer is no longer employed by the city of Pacific Grove, but that legal constraints prevented her from making any further comment.

This past spring it was discovered that he had a number of decals on his pickup espousing extremist right-wing views with silhouettes of automatic weapons and another mocking the LGBT movement. One of the decals named a group called the Three Percenters, which was one of the groups that participated in the assault on the Capitol building a week ago.

The officer was investigated but exonerated when he claimed he didn’t know what the Three Percenters were.

But then again in November it was discovered that the same officer had posted obscenities aimed at the Black Lives Matter movement on a right-wing social media platform called Parler that Amazon effectively shut down this week for allowing violent comments to be posted.

Dear Abby: My husband says it’s inexcusably selfish of me to exercise