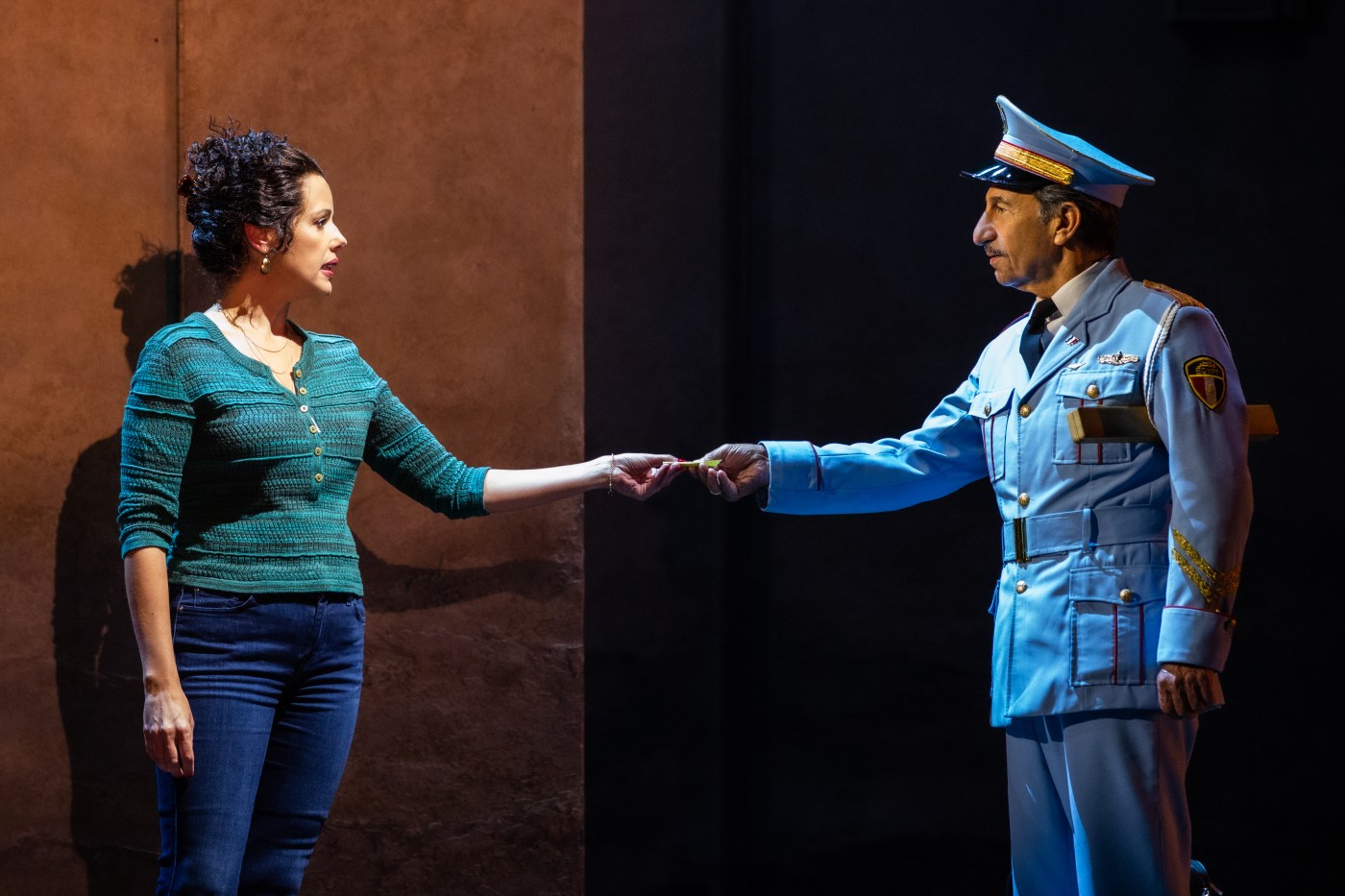 In the magical world of “The Band’s Visit,” music is honey in the ear and hope is the scent of jasmine floating on the wind under a painted desert sky.

Created by Berkeley native Itamar Moses (book) and David Yazbek (music and lyrics), this is a melancholy jewel of a musical that prefers delicate notes of heartache over brassy showtunes, quiet moments of poetry over Broadway spectacle.

The 2018 Tony winner for best musical, long-delayed in its local debut due to COVID, may well have found its perfect moment in the now.

A yearning for the profound aspects of life, for the balm of belonging and community,  courses through this intimate musical. Rooted in the ephemeral nature of life, the way a pregnant pause can stay with you forever, the way the fleeting moments may well be the most beautiful, the sparkle in this show lies in its lightly existential air.

As in a Chekhov play, nothing happens, yet all of the mysteries of life seem to hang in the balance.

Meet the spit-and-polish ranks of the Alexandria Ceremonial Police Orchestra, who are flattered to be invited to perform at an Arab cultural center in Petah Tikva, Israel. Instead, the band lands in Bet Hatikva, whose denizens not so lovingly describe the town in the song “Welcome to Nowhere.” A pronunciation snafu is the culprit.

The ever dignified Tewfiq (Sasson Gabay) finds himself asking Dina (Janet Dacal), the earthy owner of the local café, if she can take the troupe in for dinner. He puffs himself up a little, she shrugs.

When it turns out the orchestra has missed the last bus and must spend the night there, Dina arranges for accommodations.

She splits the lost musicians up, taking Tewfiq and Haled (Joe Joseph), a brash young trumpet player smitten with Chet Baker, back to her place. This brief encounter between strangers opens the door to a deep well of wistfulness, longing for paths not taken and regrets over long ago losses.

While the leads in this touring production may not have the same explosive chemistry that Tony Shaloub and Katrina Lenk had on Broadway, the romance of the musical retains its incandescent glow. Dacal enchants in the “Omar Sharif” number and Gabay, reprising the role he played in the 2007 movie, touches your heart with his keenly developed sense of honor.

They are not the only ones gently seduced by the promise of a warm evening. There’s the devoted young man (Joshua Grosso) standing sentinel at a phone booth nightly, endlessly waiting for his love to call. There’s the lonely teenager Papi (Coby Getzug) who lives in the desert but dreams only of the sea. There’s the new father crooning to his crying baby, wishing he hadn’t had yet another bruising battle with his wife.

Moses (“Bach at Leipzig,” “Yellowjackets,” “The Slide”) has a gift for mining the meaningful buried in the mundane. And Yazbek’s (“The Full Monty,” “Tootsie”) music slyly builds to intoxicating arias that woo the imagination along with the ear.

Best in the West: 6 great spots for winter fun with the family