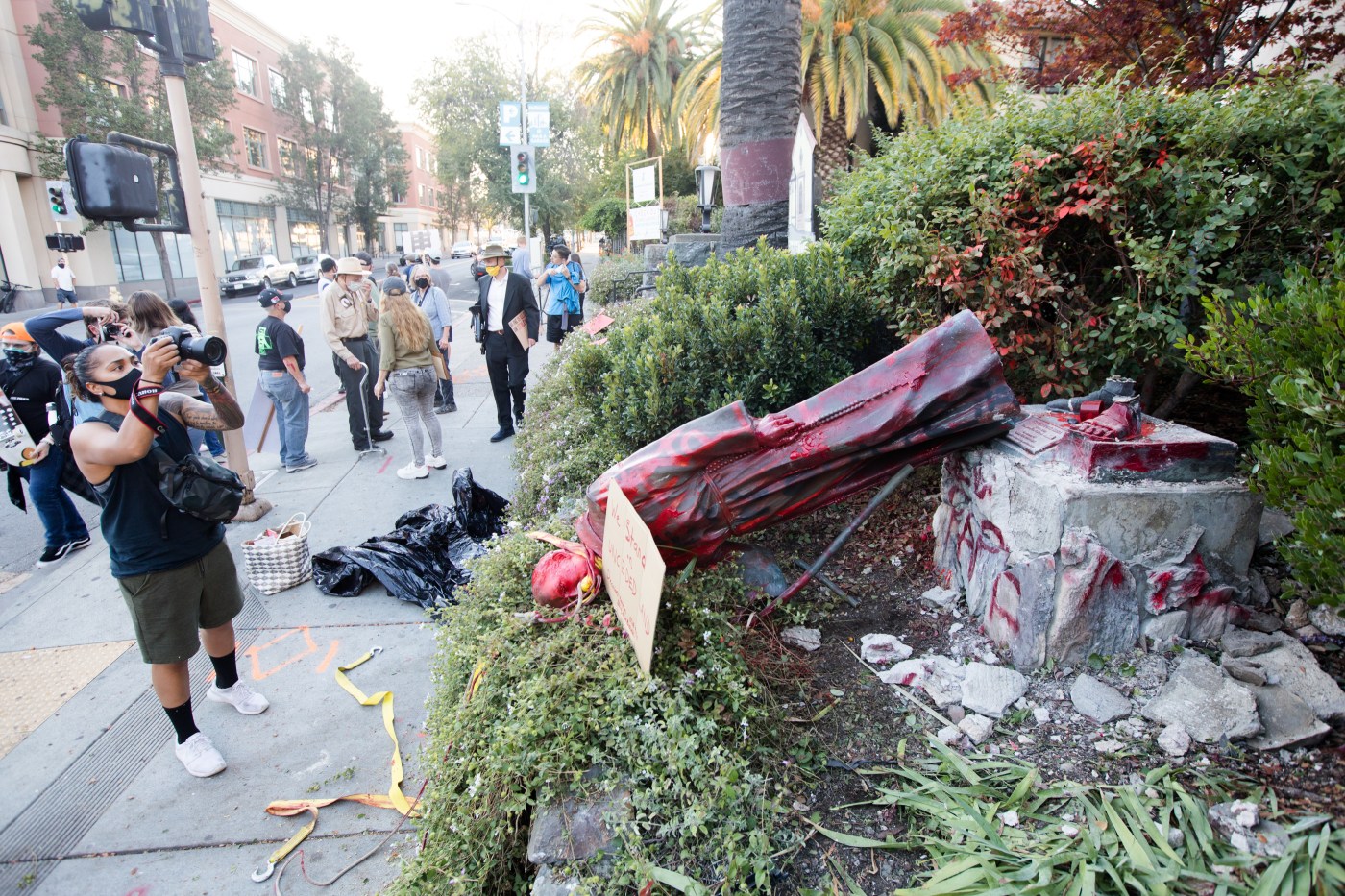 Five people accused of felony vandalism were arrested Monday for defacing and tearing down the statue of a Spanish missionary outside of St. Raphael Church in downtown San Rafael, police said.

According to the San Rafael Police Department, a small group of protesters covered the statue of Junipero Serra with paint before tying straps around it and pulling it down. Serra was an 18th-century Catholic priest who founded nine of California’s missions.

The incident happened during a demonstration for Indigenous Peoples Day — the same day as the federally recognized Columbus Day holiday — to protest against the colonization and treatment of Native Americans.

The protest of more than 40 people began at 5 p.m. at the church at 1104 Fifth Ave., according to police Sgt. Justin Graham.

Protest organizers, who said they were members of the Coast Miwok group, said Serra contributed to the destruction of Native American cultures.

Police learned about the planned demonstration a week earlier through social media. The Archdiocese of San Francisco had asked police to use de-escalation techniques and to minimize interactions that could lead to use of force, Graham said.

In an effort to keep the incident from escalating, it was a mutual decision that police would observe the demonstration and not intervene, Graham said.

“We decided not to get directly involved or interact with the demonstration because we did not want to inflame or escalate the situation,” Graham said. “If there was a violent altercation, a physical fight, we would have intervened, no question.”

About 30 minutes into the protest, a small group of demonstrators removed protective tape that was covering the Serra statue and threw red paint on it. The demonstrators also covered the statue with spray paint. The word “rape” was spray-painted on the base.

Protesters tied colored straps around the neck of the statue and pulled it down, breaking it at the ankles.

Once the demonstrators left the property, police contacted five suspects who they believed to be responsible for the vandalism and detained them. They were issued citations and released at the scene.

Lucina Vidauri, an organizer for the rally, declined to comment on Tuesday.

Church administrators deferred to the Archdiocese of San Francisco. Mike Brown, a spokesman for the archdiocese, said Monday church leaders had not been asked by the protesters to take down the statue prior to the demonstration.

In a statement, the Rev. Salvatore Cordileone, the Archbishop of San Francisco, denounced the vandalism.

“We cannot allow a small unelected group of lawbreakers to decide what sacred symbols we Catholics or other believers may display and use to foster our faith,” he said. “This must stop.”

Cordileone said Serra is the wrong target for those who want to make a statement about the suffering of Native Americans.

“Fr. Serra and his fellow Franciscans renounced all …read more