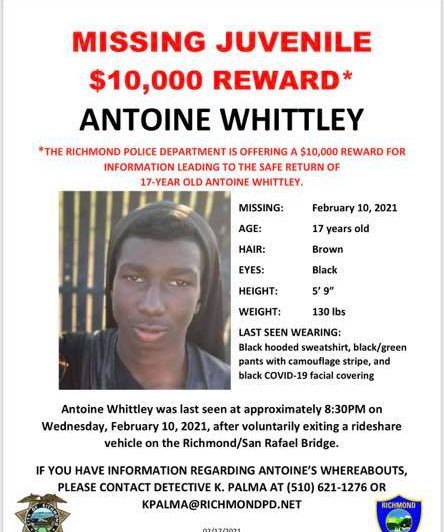 RICHMOND — With a teenager who disappeared over the weekend still missing, Richmond police are now turning to reward money in their quest to find him.

Police are offering $10,000 for information that leads to the whereabouts of Antoine Whittley, a 17-year-old Kennedy High student. He went missing Feb. 10, authorities said.

Richmond police will discuss the case and the reward at a press conference later Thursday morning.

According to police, Whittley voluntarily exited a ride-share vehicle on the Richmond-San Rafael Bridge around 8:30 p.m. He was wearing a black hooded Reebok sweatshirt, black/green pants with a camouflage stripe, and a black COVID-19 mask.

Police said something occurred about mid-span that caused Whittley to get out of the car voluntarily. They have not said what they believe happened.

Whittley spoke on his cell phone to the friend he visited around 8:30 p.m., and police said the conversation between the two led them to believe Whittley was still on the bridge. Whittley told his friend he thought he was being followed, police said.

The phone then disconnected, they said.

Police have contacted the rideshare driver and said he spoke with them and is “not a person of interest.”

California revenues soar as rich get richer during pandemic

The department’s marine unit and other agencies searched the waters underneath the bridge over the weekend and on Monday and Tuesday.

Anyone with information can contact Det. Kris Palma at 510-621-1276 or email him at kpalma@richmondpd.net.