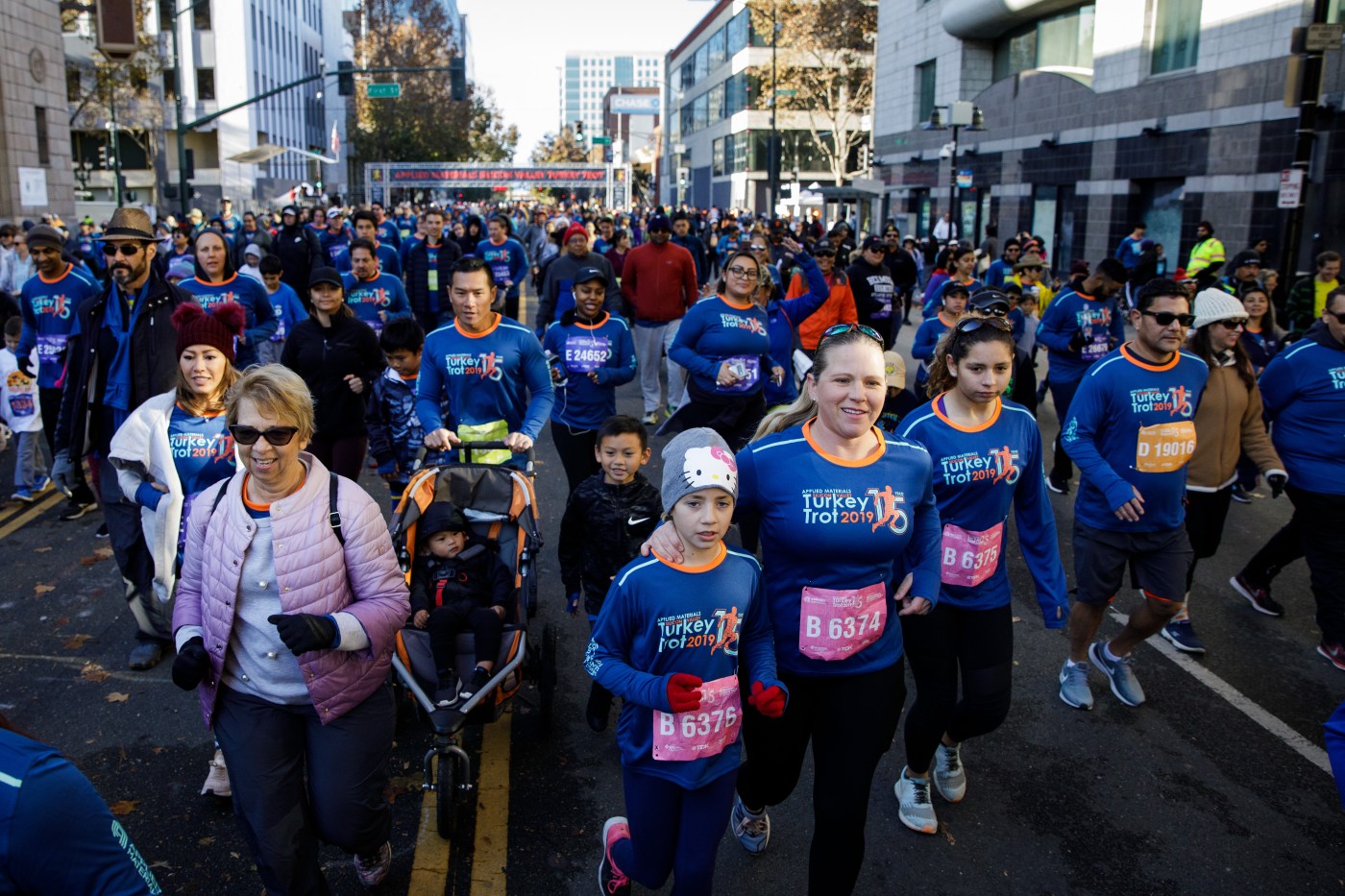 The Applied Materials Silicon Valley Turkey Trot is going virtual this year, which means about 25,000 people will be sleeping in a little later this Thanksgiving Day. But the iconic holiday run — now in its 16th year — is committed to its mission to raise $1 million for five nonprofits and has added a new twist to bring a little more kindness into our communities.

In addition to running or walking the 5K or 10K distances at your convenience from Nov. 21-29, people also can sign up for the Hometown Hero Challenge — pledging to perform 20 good deeds by Nov. 30. The not-so-random acts of kindness include telling someone you love them, reading a book to a child, exercising for 30 minutes, conserving energy and water and checking in on an elderly or vulnerable neighbor.

Everyone who completes the challenge gets a prize, but, as the saying goes, the real winners are the people you’re helping.

And while we won’t all be elbow-to-elbow wearing our race shirts in downtown San Jose on Thanksgiving, many of the Turkey Trot’s regular features also are being translated to a virtual world this year. That includes the costume contest, and registered runners are encouraged to post photos of their creative costumes between Oct. 31 and Nov. 25 for a chance at prizes including Alaska Airlines vouchers.

You can get details on how to register for a run, take part in Hometown Heroes or enter the costume contest at www.svturkeytrot.com.

GET READY TO BID: The MACLA gallery in downtown San Jose is still closed to the public, but its 22nd Latinx Art Now! auction and exhibition will culminate Thursday with more than 50 pieces created by Latinx artists up for bid, including eight that will be auctioned live.

Campbell community briefs for the week of Oct. 30

Because of the economic impact that COVID-19 has had on our creative community, MACLA is splitting proceeds from the auction 50-50 with the contributing artists.

The one-hour event will be streamed on YouTube starting at 5 p.m. and will be followed by an after-party hosted by San Jose Jazz and featuring the Villalobos Brothers at 7 p.m. You can view the artwork and get more information, including bidding instructions, at bidpal.net/lan2020.

HISPANIC FOUNDATION READY TO PARTY: The Hispanic Foundation of Silicon Valley has been getting folks all wistful the past couple of weeks sharing memories of the Hispanic Charity Ball over the past 30 years, since this year’s can’t take place in person. Instead, there will be a virtual event Saturday night hosted by NBC Bay Area’s Damian Trujillo that will feature the foundation’s Latinos in Technology Scholars, as well as silent and live auctions.

The 7 p.m. program will be followed by an after-party with music by DJ Norman. It won’t be as fun as dancing the night away at the Fairmont Hotel’s ballroom, but it’ll have to do for this year. Registration starts at $50, and all proceeds will go toward STEM programs and services for Latinx families and children in Silicon Valley. Get …read more