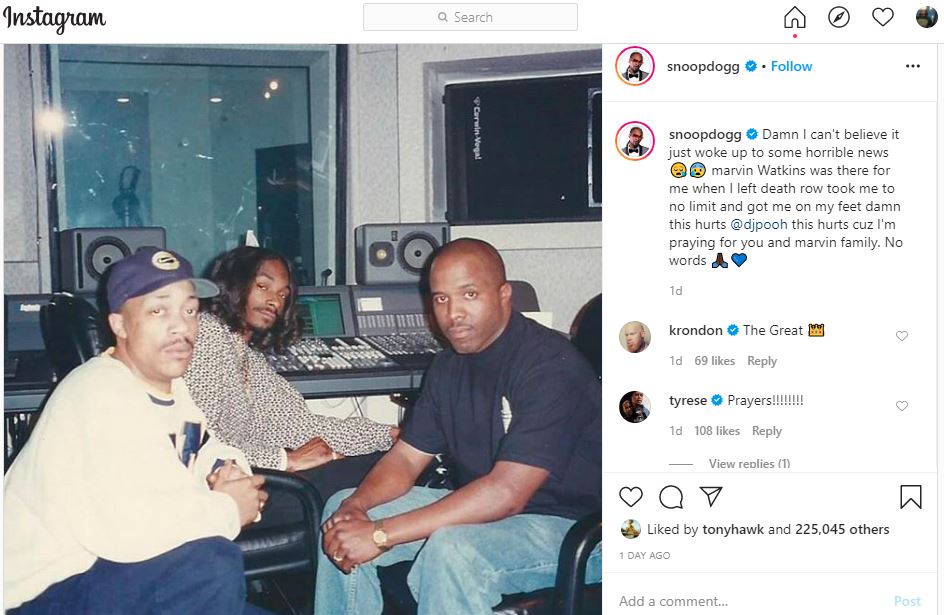 Marvin Watkins parked his car in front of his home in Pomona’s Philips Ranch neighborhood after a work shift of giving rides as an Uber and Lyft driver on Monday evening.

Inside waiting for him was his wife and his two adult children.

As Watkins, 57, walked toward the front door of his home, a vehicle drove up near Watkins. One of the occupants aimed a gun at Watkins and fired, striking him multiple times, said Pomona police Sgt. Jamie Martinez of the department’s detective bureau.

The vehicle sped away and Watkins’ family ran outside to find him lying on the sidewalk in front of their home.

Shortly after a phone call to authorities, police and paramedics converged at the home on Viewpoint Circle, where Watkins was pronounced dead.

Martinez said his detectives have yet to gather any promising leads in the case — no suspect description, no witnesses, and no hints as to why anyone would want to shoot and kill Watkins, a former music label executive and producer with ties to renowned artists like Snoop Dogg.

“Marvin Watkins was there for me when I left Death Row, took me to No Limit and got me on my feet,” Snoop Dogg wrote in an Instagram post on Tuesday, referring to his transition between record labels in the 1990s. The post showed a picture of a younger Snoop Dogg with Watkins and one other person in a music studio. “This hurts … No words,” Snoop Dogg wrote.

Martinez said detectives are probing various angles, such as possible gang ties in the past, or even a feud that may have developed during Watkins’ time in the music industry.

“We’re not ruling out those things just yet,” Martinez said.

Watkins’ left his fingerprints on projects by some of hip-hop’s largest names, such as Snoop Dogg and DJ Quick, as well as several Billboard charting albums like Houston rapper Big Moe’s “Purple World,” according to Allmusic.

Another large name in hip-hop, DJ Pooh, who has produced music for 2Pac, Ice Cube, and LL Cool J, also mourned the loss of Watkins on social media.

“Those that know me know this hurts!” DJ Pooh wrote in an Instagram post on Tuesday. “Friend for over 30 yrs. RIP Starv!”

Police: Death of man found in Oakland slough was homicide