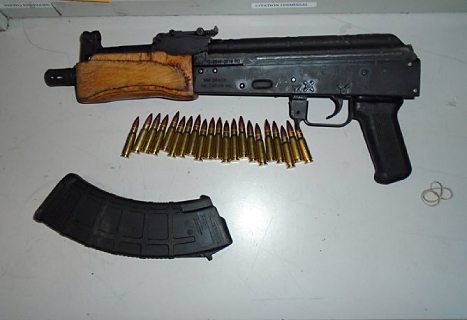 SARATOGA – A 24-year-old man was arrested on suspicion of illegally possessing an AK-47 following a vehicle pursuit in the South Bay earlier this week, authorities said.

The chase began about 9:10 p.m. Monday when deputies tried to stop a driver for a red-light violation near Saratoga Avenue and Highway 85 in Saratoga, the Santa Clara County Sheriff’s Office said in a news release Wednesday.

The sheriff’s office said the driver lost control of his Infiniti G35 while exiting Winchester Boulevard and crashed into an embankment. He then left the scene on foot.

Deputies found a loaded and unregistered AK-47 inside the car, the sheriff’s office said. Campbell police officers, meanwhile, found the driver nearby and detained him.

The sheriff’s office said the driver was a convicted felon and on probation for grand theft.

No other injuries were reported.

Anyone with information related to the case can contact the sheriff’s office at 408-808-4500.