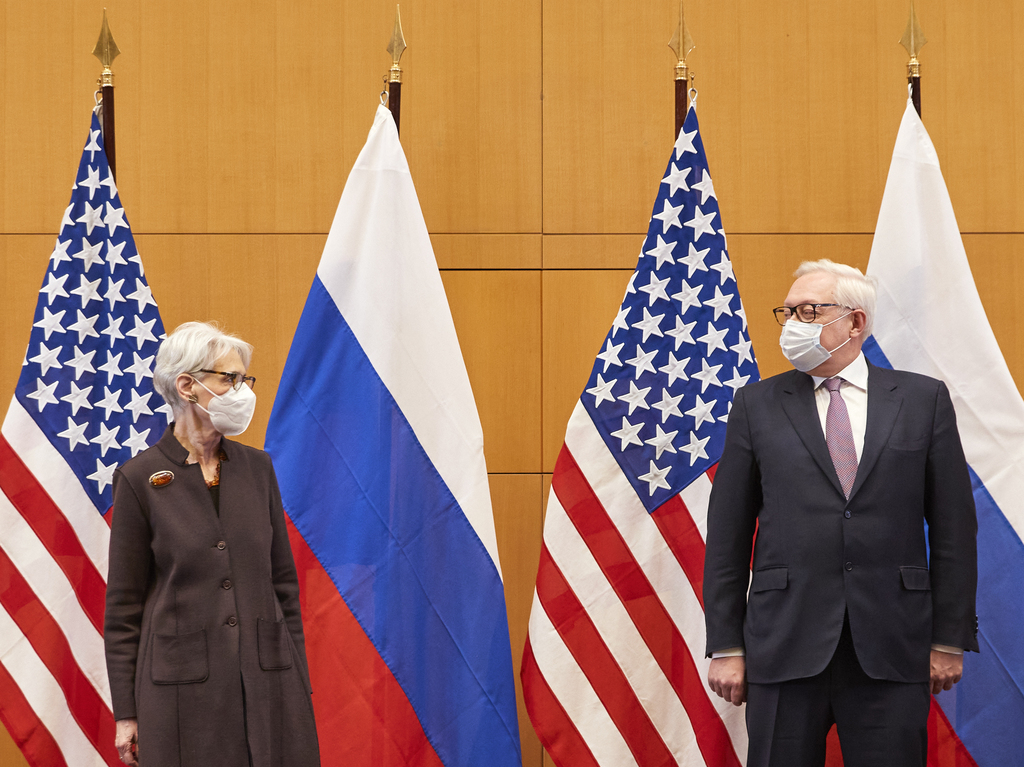 GENEVA — Russia and the U.S. remained far apart Monday after talks aimed at defusing tensions over Ukraine, with Moscow insisting on guarantees to halt NATO’s eastward expansion and even roll back the military alliance’s deployments in Eastern Europe, and Washington firmly rejecting the demands as a nonstarter.

With both sides dug in on their positions and Ukraine’s future hanging in the balance, Deputy Foreign Minister Sergei Ryabkov said “no progress” was made on the central demand to halt NATO expansion, although he insisted: “We have no intention to invade Ukraine.”

Ryabkov spoke after 5 1/2 hours of talks with a U.S. team led by his U.S. counterpart, Wendy Sherman — part of a flurry of diplomatic activity in Europe this week aimed at defusing tensions over a Russian military buildup on the border with Ukraine.

Sherman called the talks a “frank and forthright discussion.”

“It was not what you would call a negotiation,” she said in a conference call with reporters. “We’re not to a point where we’re ready to set down texts and begin to go back and forth.”

“We were firm, however, on pushing back on security proposals that are simply nonstarters for the United States,” Sherman said, adding “we will not allow anyone” to shut NATO’s “open-door policy” that extends to countries seeking entry in the alliance.

She said Washington “will not forgo bilateral cooperation with sovereign states that wish to work with the United States. And, we will not make decisions about Ukraine without Ukraine, about Europe without Europe or about NATO without NATO.”

Russian President Vladimir Putin has described NATO expansion to Ukraine and other former Soviet states as a “red line” for Moscow, demanding binding guarantees from the West that they wouldn’t become members of the alliance.

Moscow has sought to wrest a string of concessions from the U.S. and its Western allies, and has massed an estimated 100,000 troops near Ukraine in steps that have raised concerns about a possible military intervention there.

“The situation now is so dangerous, and so — I would say — precarious that we cannot afford any further delays in resolution of this very fundamental question,” Ryabkov said at a separate news conference at the Russian mission. “As President Putin said, on many occasions, ‘we cannot backpedal. We cannot go backwards. There is no further space for us to do so.’”

“The American side has treated the Russian proposals seriously and deeply studied them,” he said, adding that he characterized Moscow’s demand for legally binding guarantees that NATO would not move eastward was “an absolute imperative for us.”

Ryabkov emphasized that it would be hard to work on other issues if the U.S. stonewalled on Russia’s key demands.

“If now NATO proceeds towards deployment of capabilities that are being developed very rapidly in the U.S., and will possibly be introduced somewhere in Europe, …read more