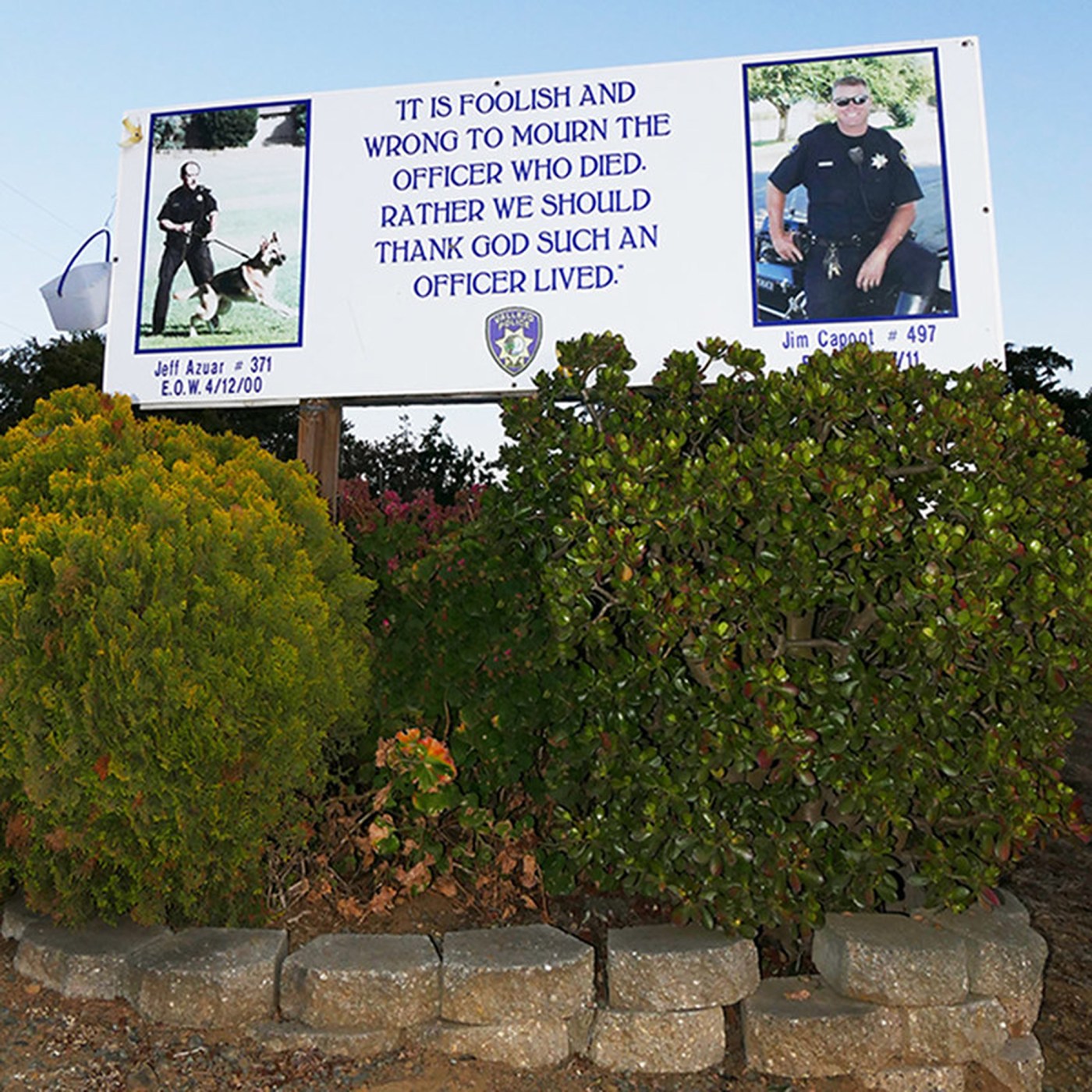 The posts supporting the signs were apparently pulled out and the signs split in half, Robinson said, adding that there “was no evidence of a vehicle driving into the path of the memorial signs.”

A security camera at Skyview Memorial near the memorial sign site “was too far away,” Robinson said.

What remained of the signs was removed as evidence, the watch commander said.

“It is disturbing that individuals would distain the memory of our fallen officers by damaging the memorial signs honoring the late Officer Azuar (badge No. 371) and Officer Capoot (badge No. 497),” Williams said. “This intentional act of vandalism is unacceptable and is not a first amendment right. Our department is currently investigating the matter.”

Though in this third month of administrative leave, Lt. Michael Nichelini said he was obligated to respond to the vandalized signs on behalf of the Vallejo Police Officers Association.

“Destroying a memorial that honors the dead is truly despicable and disgusting. It is hateful, disgraceful and cowardly,” said Nichelini, VPOA president. “It is wrong that attacks on police, living and dead, are allowed to occur without consequence. It’s time for all violence to stop.”

“It is heartbreaking that someone — or a group of people — would damage a community memorial to recognize and honor the ultimate sacrifice made by these two officers,” Nichelini said, with condemning words echoed by Mayor Bob Sampayan.

“I’m extremely angered and appalled by the disrespect shown to officers Jeff Azuar and Jim Capoot,” said Mayor Bob Sampayan. “The billboard has been there for many years as tribute to two heroes killed in the line of duty. “

Sampayan added that Azuar and Capoot “were not just a Vallejo police officers, but friends to many in our community. They were well-liked and respected.”

Azuar’s daughter, Mandy Azuar Marquez, 45, responded to the vandalism from her home in Rapid City, N.D.

“Assuming it was intentional, my first feeling was just sadness and disappointment,” she said. “To have lost my dad and Jim Capoot in the line of duty is painful enough but to then see a beautiful tribute to their sacrifices destroyed was just hurtful. If it was international I feel sorry for the person or persons that felt the need to do something so awful. Perhaps they felt it was making a statement about the police, but in reality it was just causing pain to those of us who knew and loved them. It made me think about all the police officers that go out day after day to protect and serve communities where they do not feel loved or safe. It made me think about the worry their loved ones feel every single …read more