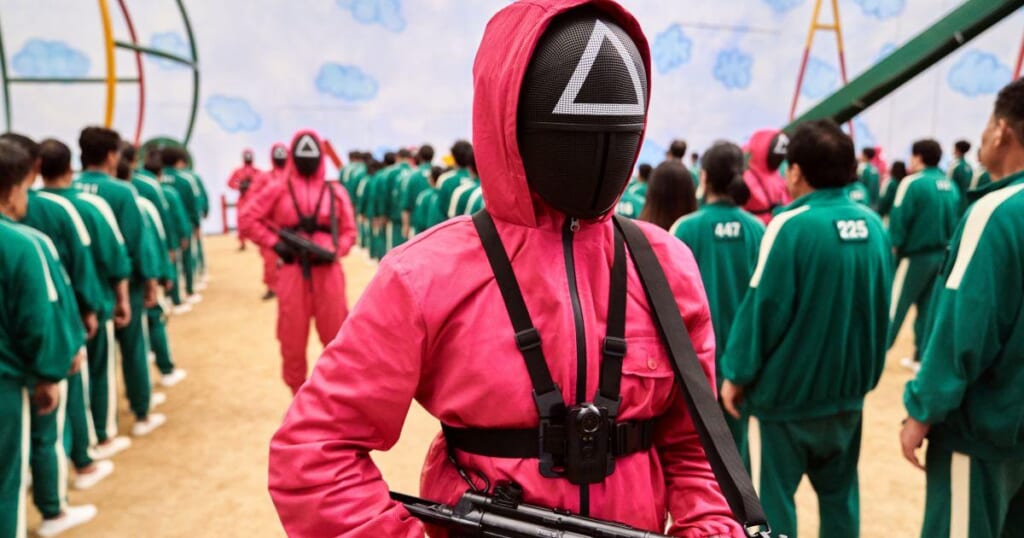 Squid Game, Netflix’s current No. 1 show and the biggest ever to ever launch on the streaming service, is apparently so popular that it’s now happening in real life.

Granted, the version that a South Korean hotel is hosting won’t kill anyone. There’s also less at stake financially—the grand prize for the hotel’s game is a mere $4,178 (5 million won), as opposed to the $38.5 million (45.6 billion won) up for grabs in the survival drama.

According to a story in the Korea Times picked up by Hypebeast, St. John’s Hotel in the country’s east coastal city of Gangneung is holding a friendly, non-fatal version of the show’s deadly contest featuring cripplingly indebted citizens.

Contestants are first given a business card that’s entirely blank except for a phone number—just like on the show. From there, they’re instructed to convene at a nearby pine forest and participate in four games—Mugungwha flower has bloomed (the Korean equivalent of Red Light, Green Light), tug of war, ‘ttakji chigi’ (paper tile flipping), and the ‘dalgona’ (flat sugar candy) challenge,” according to Korea Times.

Rule breakers are eliminated (not killed), and the host’s identity remains hidden until all games have concluded.

Squid Game has set a record for the most successful series launch on Netflix. The South Korean horror show racked up an estimated 111 million views in its first 28 days on the platform to beat Bridgerton, which set the previous record at 82 million last Christmas. according to Deadline.

The viral viewership has made Squid Game ubiquitous, so much so that the Los Angeles Lakers’ LeBron James and Anthony Davis were caught discussing the season one finale during a recent press conference.

LeBron and AD discuss their thoughts on Squid Game and I briefly lose my professionalism pic.twitter.com/HWP1tHi8oK

As Hypebeast notes, the NBA stars talked about the polarizing moment that protagonist Seong Gi-hun chose to stay in the game instead of boarding a plane home to see his daughter.

“I didn’t like the ending, though. I know they’ll start it off with a season 2,” James remarked. “But, like, get on the fucking flight and go see your daughter, bro. Like what are you doing?”