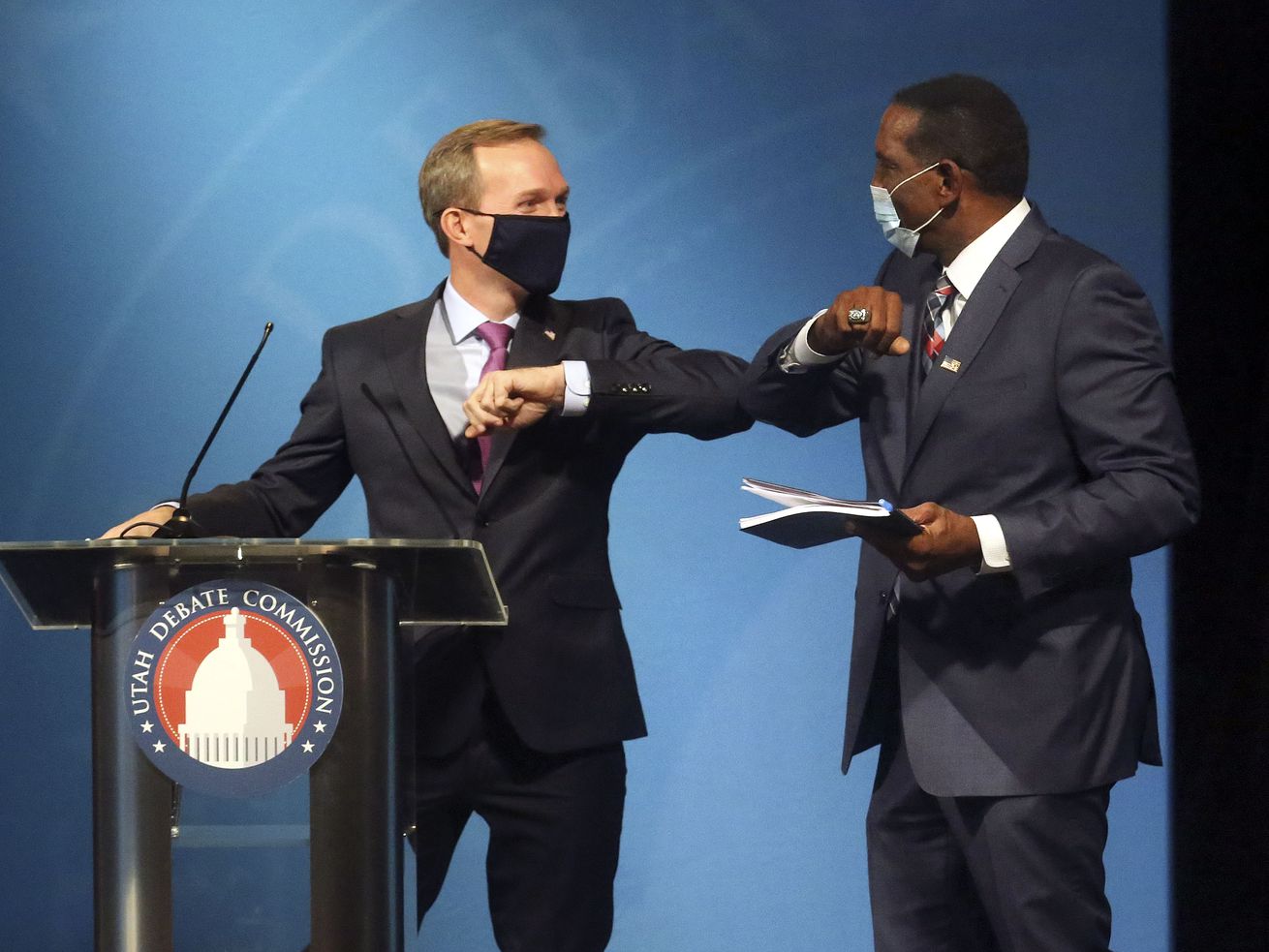 Rep. Ben McAdams, D-Utah, and Burgess Owens bump elbows after participating in the 4th Congressional District debate at the Triad Center in Salt Lake City on Monday. The two candidates spoke at a forum on Wednesday. | Kristin Murphy, Deseret News

Washington’s response to the coronavirus pandemic was a key topic of separate discussions with the congressional candidates during an hourlong virtual University of Utah Hinckley Institute of Politics “Informed Decisions 2020” forum held midday.

McAdams said the decision to fund the manufacturing of vaccines ahead of federal approval so doses can be distributed quickly if and when that comes through is “one of things that the Trump administration did well.” He said pharmaceutical companies would have been reluctant to take that financial risk.

“The government stepped in here to say there’s a societal interest, and an economic interest, in shortening the window from when the vaccine is developed to when it is wide-scale deployment. So we said, ‘Look, we’ll pay for it and if the vaccine doesn’t work, then … the company’s not on the hook,” the freshman congressman said.

Utah soldier killed in incident not related to training

Owens, a former NFL player, author and frequent Fox News guest, said the president’s $10 billion program to develop a vaccine for the deadly virus, dubbed “Operation Warp Speed,” is a model for how government should get out of the way on other issues, including health care, Social Security and Medicare.

“It’s a prototype of what we can do when we take away the regulation, we take away the bureaucracy. We literally have business running the show with government backing and supporting it instead of vice versa. We had within nine to 10 months, the potential of a vaccine that takes years or decades,” he said.

Concerns have been raised about Trump politicizing the process by pressuring drugmakers to come up with a vaccine before Election Day on Nov. 3. when experts say the more likely timeline is early next year. The president, who was hospitalized with coronavirus, has suggested the experimental drugs he was treated with are a cure.

McAdams, who came down with COVID-19 earlier this year and spent more than a week in the hospital, said politics and science should be kept apart.

“What we need to do is to make sure that we allow the scientists to do their jobs, step out of the way and not make this partisan or political. Let’s let science and public health officials guide the development of the vaccine, develop a plan for deploying the vaccine,” he said, aimed at getting it first to those …read more