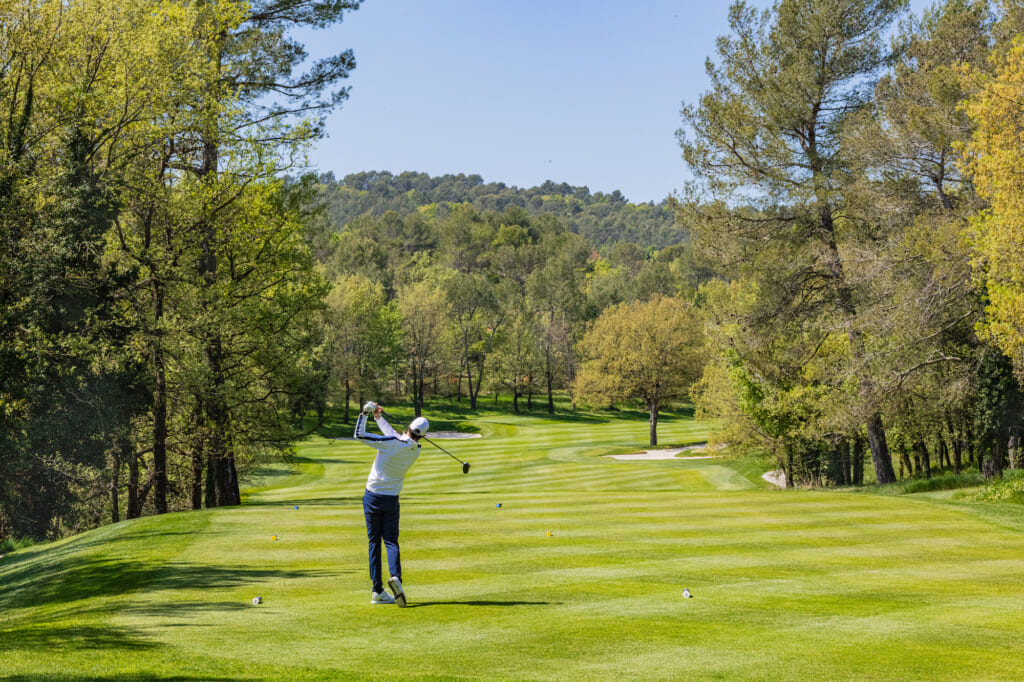 Provence is well known for its glorious weather, picturesque villages, delicious food, and even more enticing wine. But did you also know that it’s also a mecca for first-class golf?

The five-star Terre Blanche, set on 750 acres in the heart of Provence, is home to a world-class resort with both posh suites and private villas; four restaurants including the Michelin-starred Le Faventia; an infinity pool overlooking the estate; a two-story luxury spa with indoor and outdoor pools; competition-level tennis courts; two 18-hole championship golf courses; a state-of-the-art golf academy; and more.

Located a short drive from St. Tropez and all the other attractions of France’s Côte d’Azur, Terre Blanche, which was formerly a Four Seasons—the French luxury property was also once owned by Sean Connery, who began the initial work of plotting the golf links—is a member of the prestigious The Leading Hotels of the World, as well as a European Tour Destination, which designates the finest golf resorts on the continent. In 2012 following the end of Four Seasons’ management deal, it became an independent luxury resort.

Transforming the estate, originally owned by French aristocrats in the 18th century, into a world-class golf destination, reflects the vision of billionaire German tycoon and philanthropist Dietmar Hopp, who acquired it in 1999, and whose incredible sculpture collection adorns the grounds.

“In the heart of the magnificent landscape of Provence, I fulfilled a dream,” as Hopp says. “The dream of three hundred sunny days, the dream of tranquility, which for me represents absolute luxury. Terre Blanche is like an oasis and staying here is soothing for the soul.”

Terre Blanche’s architectural and interior design is inspired by its surroundings, “combining the best of nature” and “focusing on space and serenity,” with most architectural elements locally sourced, including the stone used throughout the buildings, carved from the quarries of Provence. Its stately avenues have the feel of a Provencal village, and the classical Mediterranean style of their design lends an overall air of timeless elegance.

The chief attraction for sporting gentlemen like Hopp himself is of course the two 18-hole championship golf courses, Le Château and Le Riou,’ designed by Dave Thomas. Le Chateau stands out for its “spectacular water features; ravines; vast, rapid greens; and great bunkers of white sand,” while Le Riou, with its “steep fairways and elaborate greens,” is reserved for hotel guests and Terre Blanche club members only.

Terre Blanche has been awarded “Number One Golf Resort in Continental Europe” three consecutive times by Golf World Magazine, among other honors.

The resort also features a one-of-a-kind Albatros Performance Center, the only European Tour Performance Institute certified in Europe, home to the cutting-edge Terre Blanche Golf Academy, which launched in 2019.

The academy offers golf lessons, basic training courses, (2-5 days), and intensive training (4 or 10 weeks), for both experienced amateurs and professionals. Nor is it all just practicing your swing. Each course involves an “unparalleled combination of biomechanical …read more