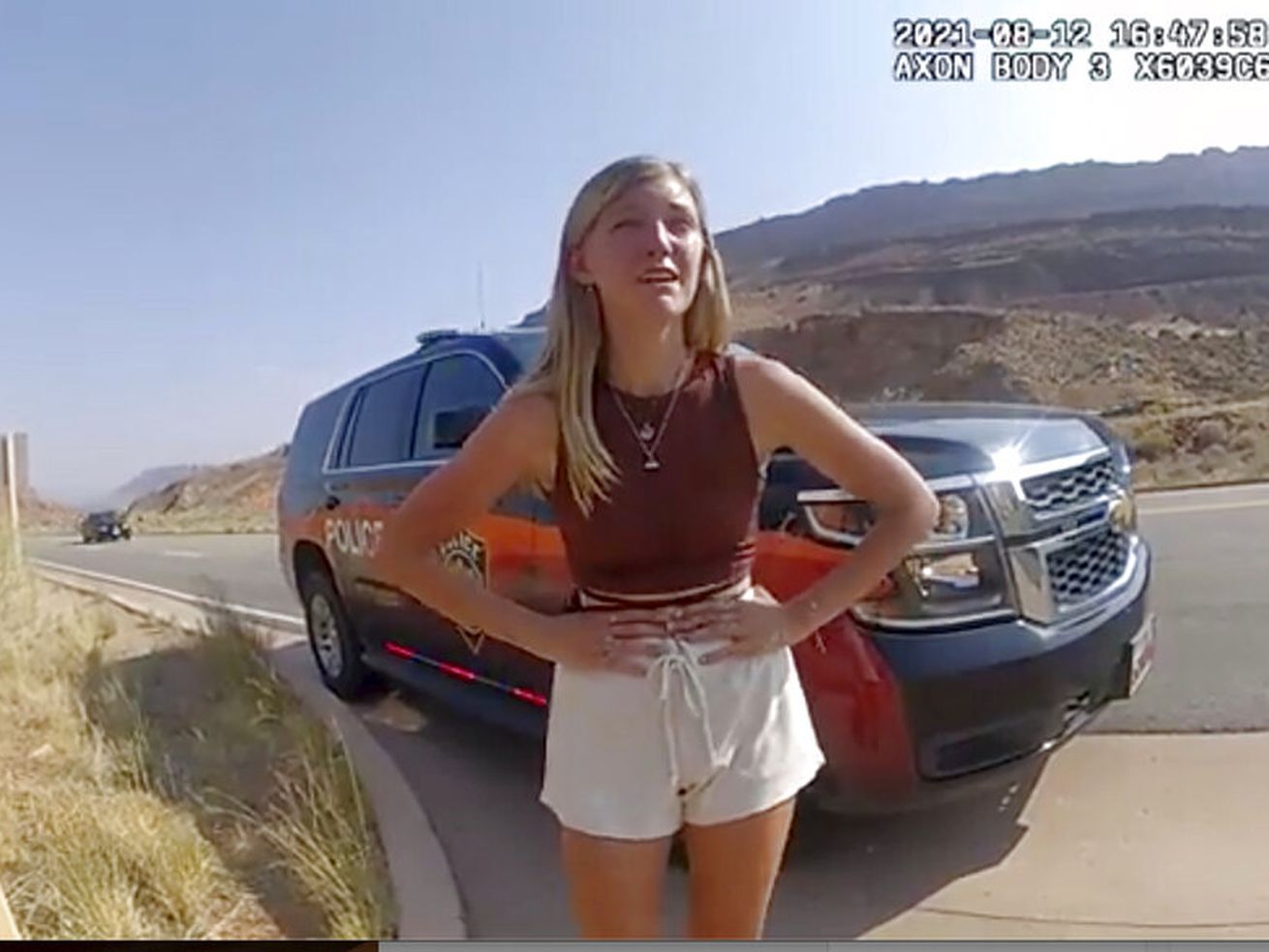 This still from police camera video provided by the Moab Police Department shows Gabrielle “Gabby” Petito talking to a police officer after police pulled over the van she was traveling in with her boyfriend, Brian Laundrie, near the entrance to Arches National Park on Aug. 12, 2021. Petito died by strangulation, Teton County Coroner Dr. Brent Blue said at a press conference Tuesday. | Moab Police Department via Associated Press

Blue said Petito likely died three to four weeks before her body was found on Sunday, Sept. 19. He added that her body had been in the wilderness during that time.
He said only the cause and manner of death can be released according to Wyoming law.
When asked if he thought Petito’s boyfriend, Brian Laundrie, killed her, Blue said law enforcement can only decide who committed the homicide.
Petito was not pregnant, Blue said.

Reports surfaced Monday that Blue would be holding a press conference to offer the full autopsy report of Petito’s death. The U.S. Attorney’s Office in Wyoming told NewsNation Now reporter Brian Entin that “this is not our press conference and our office is not commenting on the case,” meaning Blue was holding the press conference without federal authorities or the FBI.

The press conference happened about one month after Petito was first reported missing. Petito and Laundrie went on a cross-country road trip this summer, which included stops in Utah, Idaho and Wyoming, among other locations.

Will gun safety become a casualty of this new law?

But only Laundrie returned to their home in North Port, Florida, on the first day of September.
He arrived without Petito, but he was driving her white van.
On Sept. 11, Petito was reported missing by her family.

It wasn’t until Sunday, Sept. 19, that authorities found human remains in Wyoming that matched the description of Petito.

Two days later, Blue confirmed that the remains were Petito, who has born March 19, 1999. Blue said Petito had died by homicide.
“Coroner Blue’s initial determination for the manner of death is homicide. The cause of death remains pending final autopsy results,” the FBI said in a tweet.

Michael Schneider, an FBI Denver special agent, said in a statement at the time that the goal was to find who was responsible for Petito’s death.

“The FBI’s commitment to justice is at the forefront of each and every investigation,” he said. “The FBI and our partners remain dedicated to ensuring anyone responsible for or complicit in Ms. Petito’s death is held accountable for their actions.”

Meanwhile, Laundrie, who is a person of interest in the case, went missing, too. His family first reported him missing on Friday, Sept. 17. His family said they last saw him on Sept. 14, before changing their story, saying he had disappeared on Sept. 13.

Since then, authorities have conducted a manhunt for Laundrie, which has been focused on the 25,000-acre Carlton Reserve in Florida. His whereabouts remain unknown.
…read more