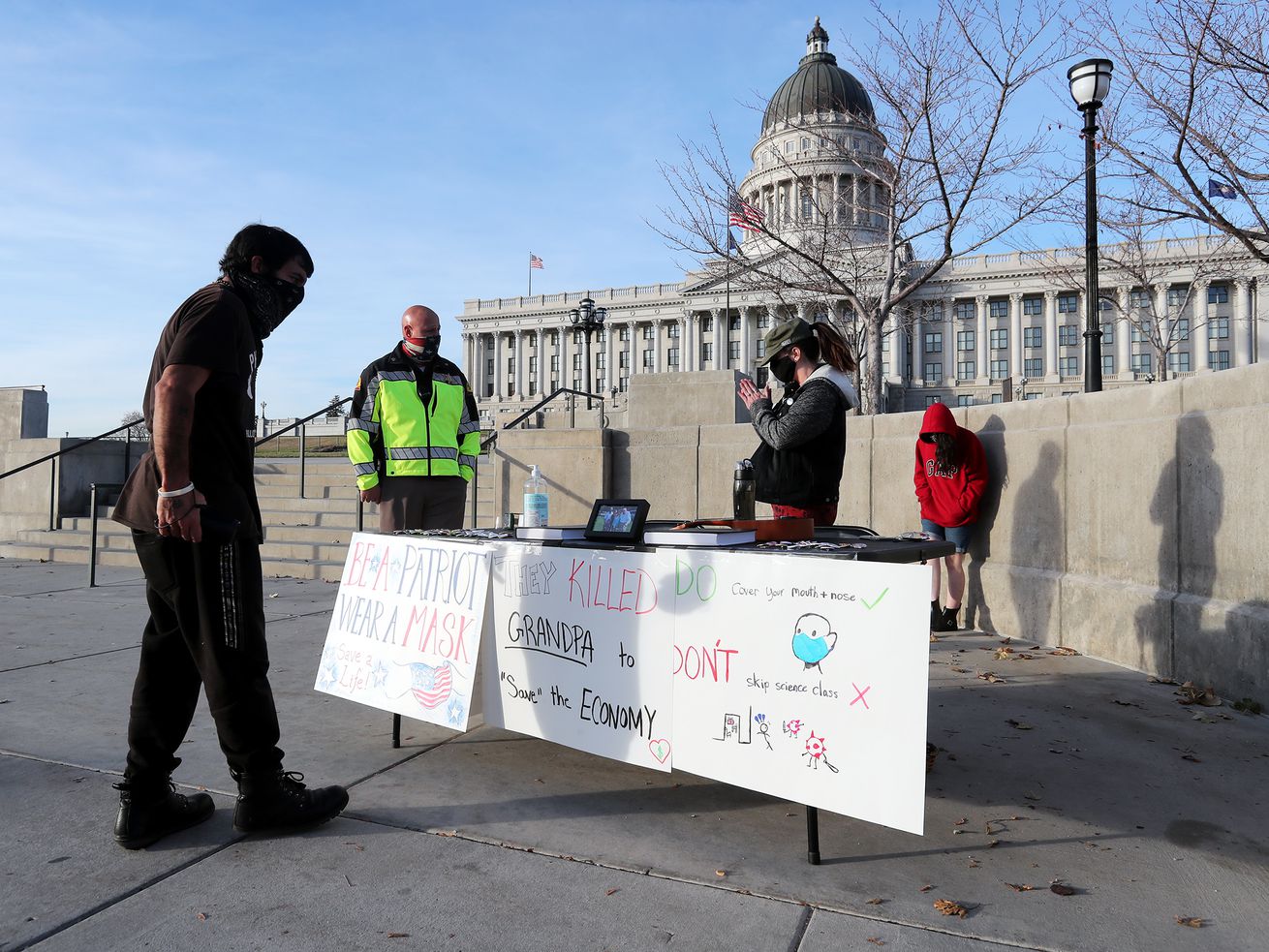 A man out for a walk and a Utah Highway Patrol trooper look at a table set up by Larissa Hammond and her daughter, Evie, in front of the Capitol in Salt Lake City on Monday, Nov. 16, 2020. The table was decorated with buttons and posters the family made showing the family’s frustration with state leadership and anti-maskers. The Hammonds’ grandfather and great-grandfather, World War II veteran Victor W. Hammond, died of COVID-19 on Veterans Day in a care center with only one family member in the room. | Scott G Winterton, Deseret News

TOOELE — On a day meant to honor men and women like him, Navy veteran Victor Hammond slipped away from those who loved him without feeling the grief in a daughter’s kiss, the longing of a grandchild’s hug or the comfort that comes from clutching the hand of someone who loved him.

It was not the goodbye Victor Hammond deserved.

And that haunts those who loved the Tooele native even more when they see people refusing to acknowledge the grim realities of a pandemic.

“After he sacrificed so much for this country, that’s how the citizens of this country thank him?” said his granddaughter Larissa Hammond, whose grief turned to rage as she watched anti-mask protesters gather outside the homes of Utah’s governor and lieutenant governor over the weekend weekend.

Scott G Winterton, Deseret News
Buttons made by Scott Hammond and his family are pictured at their home in Tooele on Monday, Nov. 16, 2020. The buttons show the family’s frustration with state leadership and the way anti-maskers are indulged. Scott Hammond’s grandfather, World War II veteran Victor W. Hammond, died of COVID-19 on Veterans Day in a care center with only one family member in the room.

“They can’t wear a mask so he has to die alone? It’s tragic. It’s infuriating.”

“I grew up right next to them when we lived in New Jersey,” said Scott Hammond of his grandfather who joined the Navy in World War II and became a radio technician. “Once I was watching a PBS documentary showing the race to get men into space, and for a split second, there was this shot of the room where they launched the rocket, and there was my grandpa.”

After his service during the war in the Navy, he came home, graduated from Utah State University, and he joined the Air Force. While in the Air Force, he earned a master’s degree from the University of Michigan, and he retired a lieutenant colonel. Just a day after retiring, he joined the same office as a civilian worker, and spent time working for the Department of Defense at the Pentagon.

“His entire life was national service,” Scott said. “He was a really well-known, well-loved guy. He served on the Pleasant Grove City Council. Anyone who met him would say, ‘Wow, that guy was incredible.’ … He’s a Renaissance man. I live in his shadow.”