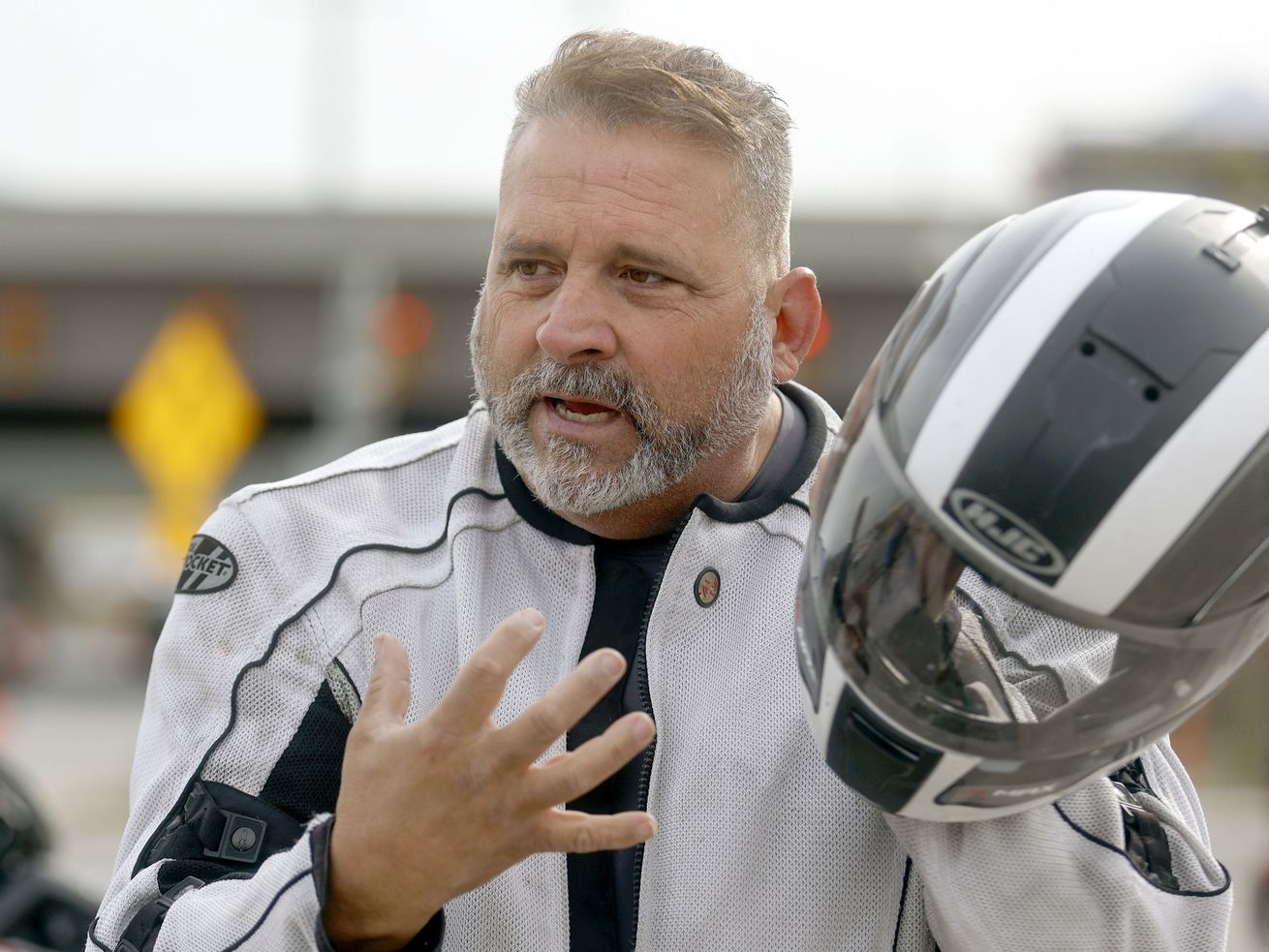 Joe Perez talks about a motorcycle crash he was in during a press event to launch the Ride to Live motorcycle safety campaign outside of Harrison Eurosports in Sandy on Wednesday, April 21, 2021. | Kristin Murphy, Deseret News

“If I wasn’t wearing a helmet, or if I was wearing a half helmet, or if I had this up at the time, I would have no face,” said Joe Perez, a motorcycle crash survivor who spoke at an rider awareness campaign event in Sandy recently.

He credits his bike gear for doing what it is meant to do.

Perez struck a Buick after it made an illegal U-turn in front of him. His front wheel lodged into the car’s engine and he flew 25 to 30 feet over it, skidding across the asphalt face first. He lived to tell his story for the “Ride to Live” campaign.

“We get the question all the time, ‘Whose fault is this?’ and the responsibility belongs to each of us both as drivers and motorcycle riders. We need to do everything we can to make sure everyone is getting home safely,” said UDOT spokesman John Gleason.

Kristin Murphy, Deseret News
Austin Baskett, Harrison Eurosports lot technician, moves a used motorcycle to another area of the shop in Sandy on Wednesday, April 21, 2021. The Utah Department of Transportation is launching a Ride to Live motorcycle safety campaign.

Gleason said there were 44 deadly motorcycle crashes in 2020. Perez told KSL he still rides and wears his protective gear, and he hopes his story will encourage others to do the same.

“If I had my daughter or my wife in the back and she didn’t have a helmet or I put a half helmet on, I’d have to live with the fact she’d be scarred the rest of her life,” said Perez.

State officials said motorcycle crashes are 11 times more likely to end in death than other accidents.

Utah requires anyone under age 18 to wear a helmet, but as an adult, Perez said his helmet made all the difference.

Visit ridetolive.utah.gov and zerofatalities.com/motorcyclists for more information on rider and driver safety.

“Motorcycles are among the smallest and most vulnerable vehicles on the road. They don’t have the same protections as cars or trucks, and this puts riders at greater risk of serious injury or death in a crash,” Gleason said. “Every year we see fatalities that could have been prevented had a driver or rider paid better attention or been more prepared. Making small improvements in our driving behaviors can put a stop to these terrible crashes and save lives.”