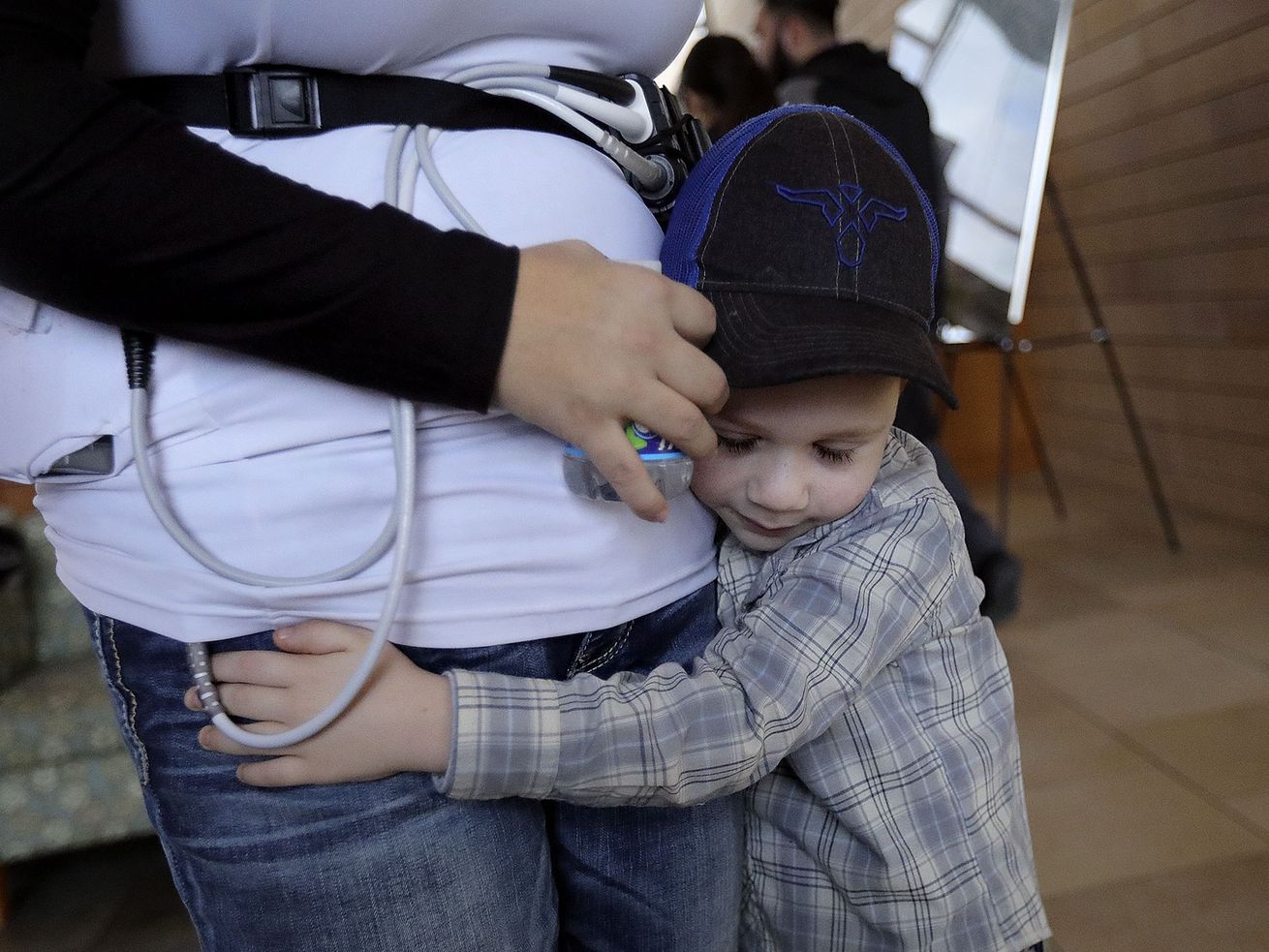 Trenton “Bubba” Dekker hugs his mother, Kayla Dekker, resting his head against her HeartMate 3 heart pump, which assists her heart as she waits for a heart transplant, during an unveiling ceremony to showcase artwork by local artists aiming to raise awareness about women and heart disease at Intermountain Medical Center in Murray on Tuesday, Jan. 14, 2020. Dekker has chronic congestive heart failure due to peripartum cardiomyopathy. | Kristin Murphy, Deseret News

MURRAY — Kayla Decker was just 26 years old when she was diagnosed with chronic congestive heart failure. She’d just had her second child.

“I had no idea. I went in three months after having my baby because I had a cough for three months. I went in and they told me I had bronchitis. A few months later, I came back and found out that my heart was actually quite enlarged on the left side,” Decker said. “That’s how they discovered it.”

Decker is one of many American women with heart disease. In fact, the disease is the No. 1 cause of death for U.S. women, said Terri Kane, Intermountain Healthcare vice president and chief operating officer of clinical programs and services.

It’s women like Decker who pushed five local artists to team up with heart clinicians from Intermountain Healthcare and the American Heart Association to create paintings centered around the disease’s impact on women. The artwork was rendered to raise awareness and give artists the opportunity to share their views on women and heart disease, Kane explained. The artists unveiled their work during a ceremony at Intermountain Medical Center on Tuesday.

“Only about half of the women in the United States recognize that heart disease is the leading cause of death,” Kismet said. “That’s astounding to me.”

Prior to the diagnosis, Decker was one of them.

Doctors removed 40 pounds of fluid from her body, implanted a device that would help restart her heart if anything adverse happened, and informed the young mother that she’d likely need a heart transplant one day.

She reported that things were going fine until she returned to the hospital three years later because she was experiencing some pain. There, Decker learned her gallbladder had failed.

“It was kind of a blessing in disguise. If I hadn’t gone in then I wouldn’t have known again that my heart was as sick as it was,” she said, then paused for a moment. “Sorry, it’s a life changer.”

Heart disease is not just an older person’s disease, nor is it just a man’s issue, Kismet said, pointing out that women tend to have different symptoms than men. Like Decker’s experience, heart disease can manifest itself for women in various ways. It’s not necessarily just chest pain.

Decker underwent surgery, and after putting on 60 pounds of fluid in a month, was rushed by medical helicopter to Intermountain Medical Center. She spent two months waiting for her heart to be …read more