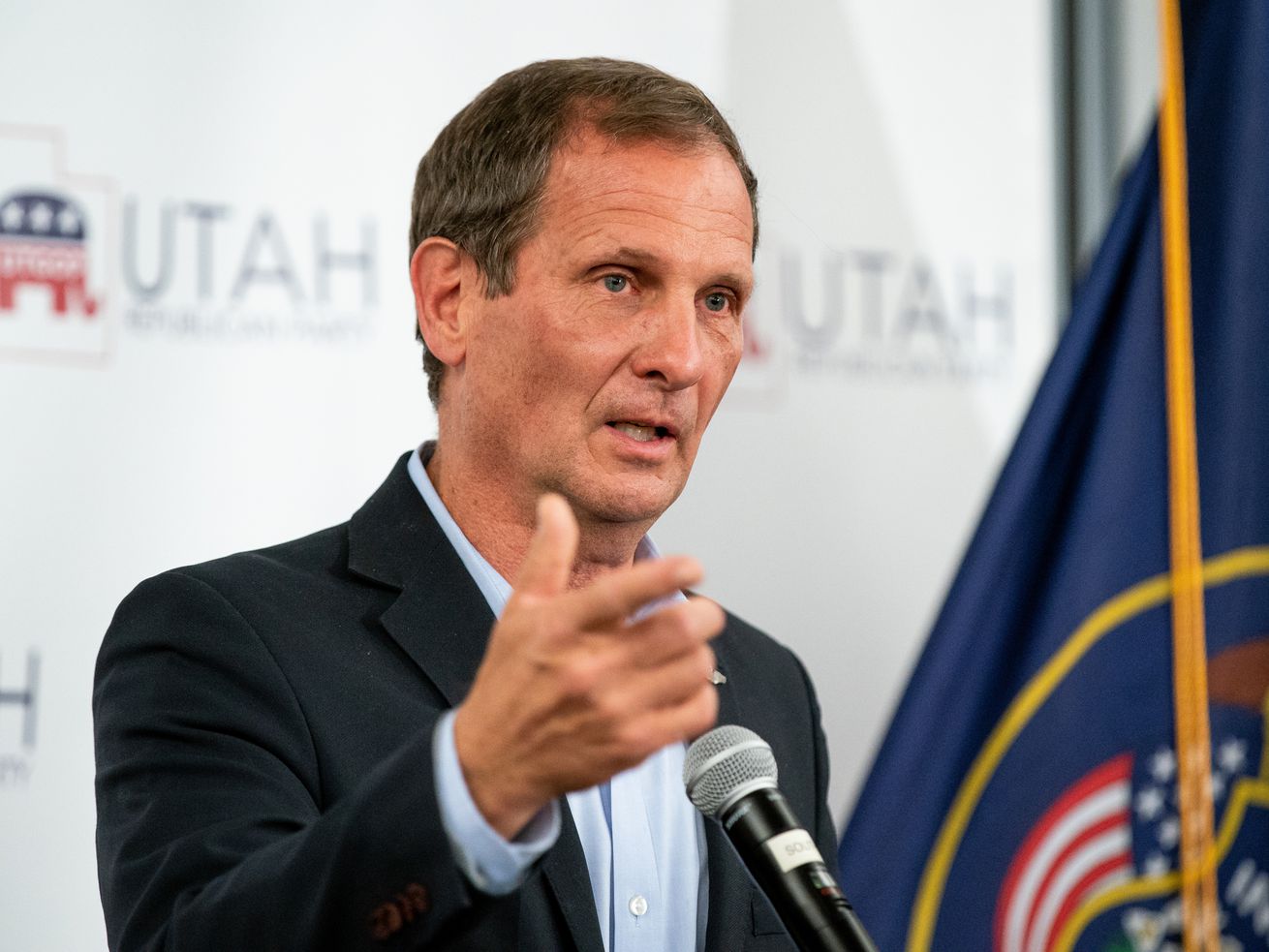 Rep. Chris Stewart, R-Utah, speaks at an election night event for Republican candidates in at the Utah Association of Realtors building in Sandy on Tuesday, Nov. 3, 2020. The Democratic-controlled House approved a resolution Tuesday, Oct. 12, 2021 to temporarily raise the government’s borrowing limit to $28.9 trillion without a single Republican vote, including those of Utah’s four GOP congressmen. | Spenser Heaps, Deseret News

U.S. House passes bill to up debt limit along party lines. Now it goes to Biden.

The House passed a short-term extension of the debt ceiling without a single Republican vote, including those of Utah’s four GOP congressmen.

The Democratic-controlled House approved a resolution Tuesday night to temporarily raise the government’s borrowing limit to $28.9 trillion, averting a fiscal crisis for now but setting up a second showdown in the coming weeks.

The bill increases the borrowing limit by $480 billion — an amount the Treasury Department estimates should keep debt payments flowing until Dec. 3. President Joe Biden is expected to sign the measure before Oct. 18, when the Treasury has estimated it would no longer be able to meet the nation’s financial obligations without congressional action.

“Yesterday, Democrats raised the debt ceiling with one goal in mind: Make room for the biggest tax increase since 1968 and the biggest domestic spending bill ever. We can’t expect to reduce our ever-ballooning national debt if we don’t start prioritizing fiscal responsibility over partisan politics,” Rep. Chris Stewart, R-Utah, said in a statement Wednesday.

Larry David Believes the NFL Should Curb Its Enthusiasm For Kickers

Stewart is referring to the Democrats’ plan to invest $3.5 trillion in so-called “human infrastructure,” including expanding social programs and tackling climate change. Republicans contend the price tag is more like $5.5 trillion and increase taxes for middle-income Americans.

Rep. Blake Moore, R-Utah, said he could not vote for a debt limit increase without substantive debate over spending reductions and reforms.

“As our national debt rapidly approaches $30 trillion, we must come to terms with the stark realities — and inevitable consequences — of our addiction to spending taxpayer money without consideration of our debt-to-GDP trajectory,” he said in a statement.

Instead of discussing future spending and assessing an economy that is bouncing back from the pandemic, Democrats are “doubling down” on a $3.5 trillion tax-and-spend package that will jeopardize the stability of Social Security and Medicare, impose taxes and inflation on the working class, and abandon any fiscal restraints, he said.

Moore said he plans to create a task force this month in Ogden led by community leaders to identify pro-growth policies, address wasteful spending, and advocate for ways to put the debt-to-GDP ratio on a downward trajectory.

Rep. John Curtis, R-Utah, has said voting to increase the debt limit is a place he can’t go.

“Throughout my time in Congress I have been insistent about fiscal responsibility on the federal level,” Curtis said. “Raising the debt ceiling without any notion of reigning in our spending is not the Utah …read more