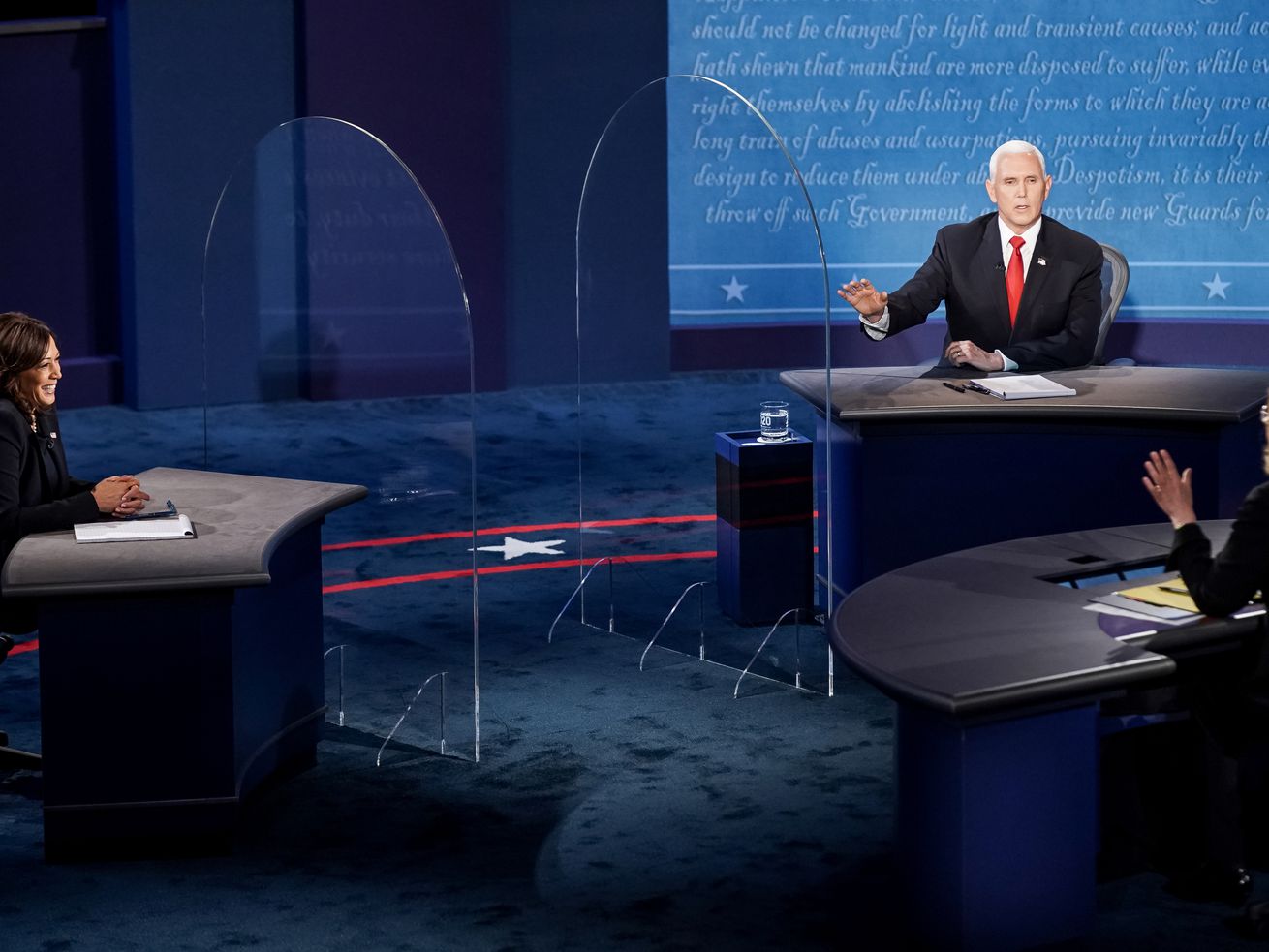 Moderator Susan Page tries to reign in Vice President Mike Pence as he talks past his allotted time during his debate against Democratic challenger Sen. Kamala Harris, D-Calif., in the vice presidential debate at Kingsbury Hall at the University of Utah in Salt Lake City on Wednesday, Oct. 7, 2020. | Spenser Heaps, Deseret News

SALT LAKE CITY — Both Vice President Mike Pence and California Sen. Kamala Harris were able to draw sharp differences between the Republican and Democratic presidential tickets Wednesday night in their only debate before the November election, held at the University of Utah.

But despite frequent interruptions and not many direct answers, the vice presidential candidates stopped short of repeating the chaos of last week’s first — and possibly only — debate between Republican President Donald Trump, who was later diagnosed with COVID-19, and Democratic former Vice President Joe Biden.

The deadly virus was the first topic tackled during the 90-minute debate in Kingsbury Hall before a socially distanced audience limited to some 200 people who had to test negative for COVID-19 and were warned that if they removed their masks, they’d be escorted off the premises by law enforcement.

“Frankly, this administration has forfeited its right to reelection” based on its response to the virus, Harris said, criticizing Trump for not sharing information he had early on about its seriousness. She said she would not take a vaccine recommended by the president but would be “first in line” for one backed by medical experts.

Pence said “from the very first day, President Trump has put the health of Americans first,” and his efforts, including suspending travel from China into the United States, represents “the greatest national mobilization since World War II and I believe it saved hundreds of thousands of American lives.”

The vice president, who heads the administration’s task force on the virus, took a shot at Biden, saying his plan for combating the coronavirus “looks a little bit like plagiarism” even though the Democratic presidential nominee has called for what would amount to a national mask mandate.

Harris countered, “Whatever the vice president is claiming the administration has done, clearly it hasn’t worked when you’re looking at over 210,000 dead bodies in our country, American lives that have been lost.” She referred to their “ineptitude” and said too much has been sacrificed because of “incompetence.”

The rest of the debate — which included questions on the U.S. Supreme Court vacancy the president is pressing to fill quickly and the economy — followed a similar pattern with both candidates at times talking over moderator Susan Page, USA Today’s Washington bureau chief, as she tried to enforce a two-minute rule for answers.

Pence said he was “honored” to attend a ceremony in the White House Rose Garden for Trump’s pick for the high court, Judge Amy Coney Barrett, that has been described as a “super-spreader” event for COVID-19 after Sen. Mike Lee, …read more