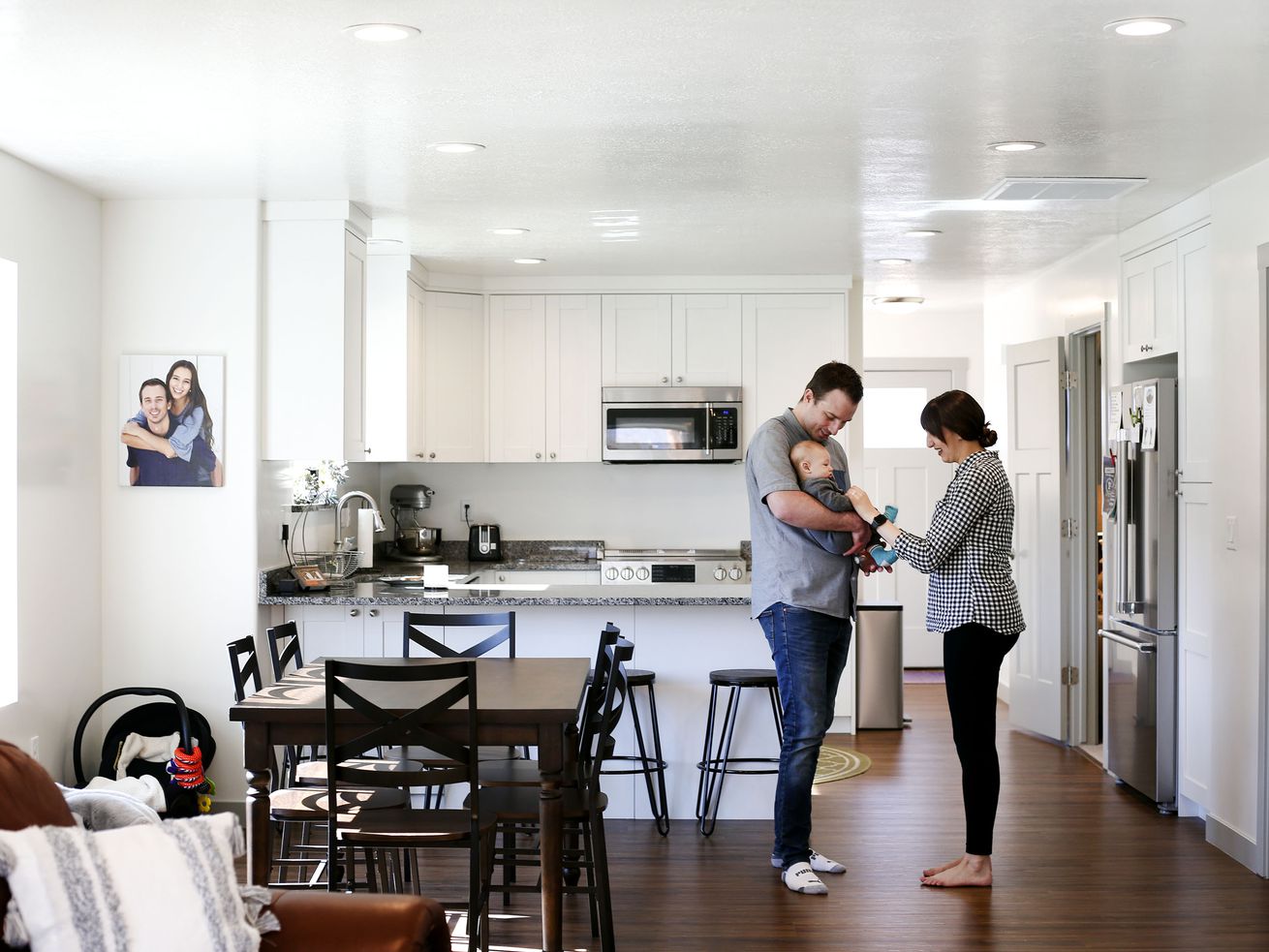 Mark, left, and Missy Haslam play with their son, Maverick, in their net-zero home in Ogden on Wednesday, April 27, 2021. The Weber State University-driven project took first place internationally for its energy performance in a fierce competition, beating out eight other teams. | Laura Seitz, Deseret News

An “off-the-shelf” Utah project found innovative and affordable ways to embrace net-zero emissions and in doing so, outshined multiple countries in an international competition.

This is why it matters: This Ogden home produces more energy than it consumes and is what many advocates believe to be the wave of the future when it comes to combatting climate change.

Net-zero is a trend that is becoming increasingly popular as communities look to cut carbon emissions. Net-zero energy simply means that a home or building produces as much energy as it consumes.

A group of 50 university students led by a Weber State University faculty member demonstrated they were best in innovative engineering and architecture by building a net-zero home ranked No. 1 for its energy performance.

In doing so, they bested eight other collegiate teams — from the Netherlands, South Africa and Chile — to take the top prize in that category, as well as second place in presentation in the International Solar Decathlon.

“Energy performance is what we concentrated on the most, so we were excitedly shocked but proud to win,” said Jeremy Farner, a building design and construction professor at WSU and director of the effort.

The University of Colorado at Boulder took first place overall.

A report put out a couple of years ago estimated there were more than 5,000 net-zero homes in the country and another 7,000 multifamily units. Those numbers were estimates released even before new building codes took effect in California that require nearly every new home constructed to include solar panels and high energy-efficiency design.

Laura Seitz, Deseret News
A Weber State University-driven net-zero home is pictured in Ogden on Wednesday, April 27, 2021. The home took first place internationally for its energy performance in a fierce competition, beating out eight other teams.

Another organization, the Energy & Environment Building Alliance, documented the inventory of net-zero building units in both the United States and Canada at 27,965 in 2019, and notes where each state stands. Utah was not among the top 20 U.S. states for its units, — but it did not rank among the poorest performing — logging anywhere from 100 to 999.

In Ogden, the home at Quincy Avenue in the central city area was designed to incorporate the “true cost of ownership” by cutting energy costs to operate the home at just $100 a year.

And it is not a small home.

The 2,540-square-foot house features six bedrooms, two bathrooms and two family rooms. It includes portable battery backup technology to power the home’s critical functions for up to 72 hours if the electrical grid were to go down. Its solar array generates enough energy to …read more