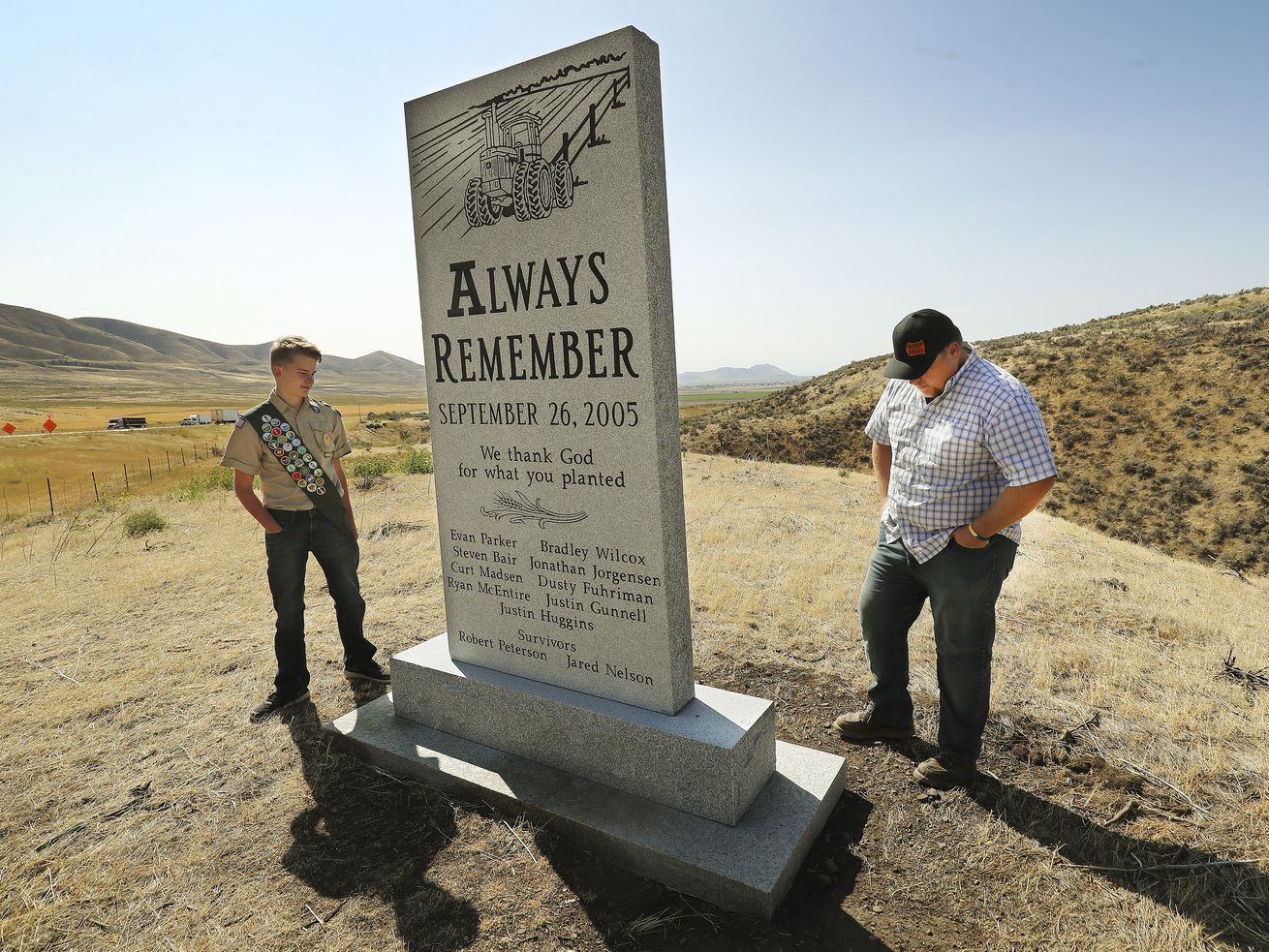 Eagle Scout Rusten Thornley and Robbie Petersen look over a monument dedicated to eight Utah State University agriculture students and an instructor who were killed in a 2005 van crash near Bothwell, Box Elder County, on Wednesday, Sept. 9, 2020. Petersen survived the crash, and Thornley raised the money for the monument. | Jeffrey D. Allred, Deseret News

TREMONTON — Robert “Robbie” Petersen and Rusten Thornley had never met before, yet they shook hands like old friends.

The handshake and unique meeting between the 36-year-old Petersen, sporting a black Western Seeds Utah hat, and the 16-year-old Eagle Scout, dressed in his tan uniform with green merit badge sash, took place a few feet from a new 8-foot granite monument, located a few miles north of Tremonton and just off the eastbound side of Interstate 84.

What brought the unlikely pair together was 15 years in the making, beginning with a tragic accident and culminating with a fitting tribute.

“This site will always have significance for me,” Petersen said. “Every time I come past here I’m reminded of that day.”

On the sunny fall afternoon of Sept. 26, 2005, a 1994 Dodge passenger van with 10 Utah State University agriculture students was returning from a field trip to see farm equipment in Box Elder County. Evan Parker, a USU Ag instructor, was the driver. The students were underclassmen, mostly freshmen, including Petersen, who recalled conversations on various topics as they rode along.

“Guys were talking about the combine we had just looked at,” he said. “As part of the field trip there was a worksheet to fill out, so guys were asking each other questions. Being a bunch of farmers and ranchers, there was talk about Ag stuff. We also talked about the college of Ag activities on campus to celebrate Ag week.”

The legacy of Ruth Bader Ginsburg

Just before 4 p.m., Parker lost control of the van when the left rear tire blew out, causing the van to roll and ejecting all 11 occupants. The Utah Highway Patrol estimated the van traveled from the interstate over about 300 yards of sagebrush before coming to rest on the edge of a deep ravine.

Nine of the 11 died as a result of the accident, including Steven Bair, 24, of Moses Lake, Washington; Dusty Fuhriman, 22, of Tremonton; Justin Gunnell, 24, of Providence; Justin Huggins, 21, of Bear River; Jonathan Jorgensen, 22, of Hyrum; Curtis Madsen, 23, of Payson; Ryan McEntire, 22, of West Point; Bradley Wilcox, 26, of Salt Lake City; and Parker, 45, of Hooper.