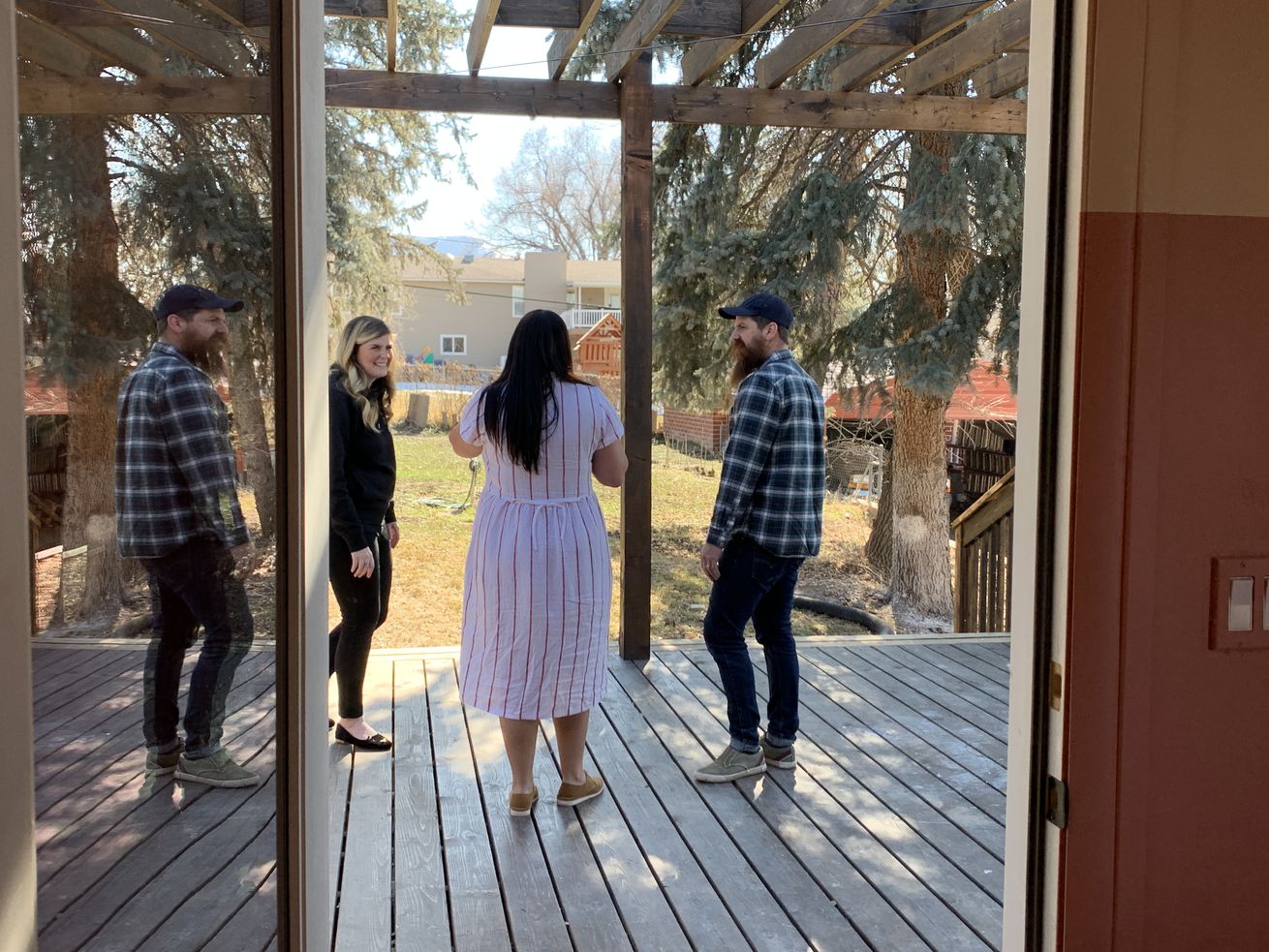 Designer Candis Meredith, left; homeowner Aubrey Bennion, center, and Andy Meredith are pictured on Bennion’s porch at her Bountiful home in this undated photo during her renovation for which she had contracted with the Merediths to oversee. | Aubry Bennion

Residents open up on social media about renovation nightmares

When Aubry Bennion’s kitchen renovation process began in October 2019, she had high hopes. It was the last big project in her Bountiful home, which she purchased a year earlier.

Bennion was told the renovation, which would be captured on film for a television show, would last a few weeks and cost around $20,000.

However, she said those hopes soon gave way to stress, anxiety and higher costs.

Bennion is one of a handful of Utah residents speaking out on social media and sharing how Candis and Andy Meredith, a Utah couple behind the television show “Home Work,” left them hanging. The show was set to debut as part of the new Magnolia Network, the brainchild of “Fixer Upper” stars Chip and Joanna Gaines, which officially launched last Wednesday.

Magnolia Network president Allison Page announced on Friday that the network was removing the show from their lineup.

“Magnolia Network is aware that certain homeowners have expressed concerns about renovation projects undertaken by Candis and Andy Meredith,” Page said. “Within the last day, we have learned additional information about the scope of these issues, and we have decided to remove ‘Home Work’ from the Magnolia Network lineup pending a review of the claims that have been made.”

The show never aired on Magnolia Network, according to the company’s TV schedule, though it appears episodes were available to stream through the Discovery+ service. As of last Friday, a web page with information on the show had been removed from Magnolia Network’s website. Prior to its removal, 13 episodes of the TV show were available for streaming.

Despite the Magnolia Network’s attempts to scrub their pages of the show, a post on Instagram featuring the Merediths was still active as of Friday. The post — which features the Merediths in the Sanpete County home they renovated as part of the show — has numerous comments from people who support Bennion and others who have also told their home renovation stories on social media.

Bennion had known the Merediths for a few years after meeting them at a DIY Network launch party, and the three stayed in contact over the years. After Bennion bought her Bountiful home, the idea of the three collaborating on a project was a no-brainer, especially with the prospect of the television series, she told KSL.com.

Aubry Bennion
Bountiful resident Aubry Bennion explains the potential changes to her kitchen in a 2019 video sent to Candis and Andy Meredith prior to their renovation.

When they met to discuss the project, Bennion said she worried that a full kitchen renovation would cost …read more