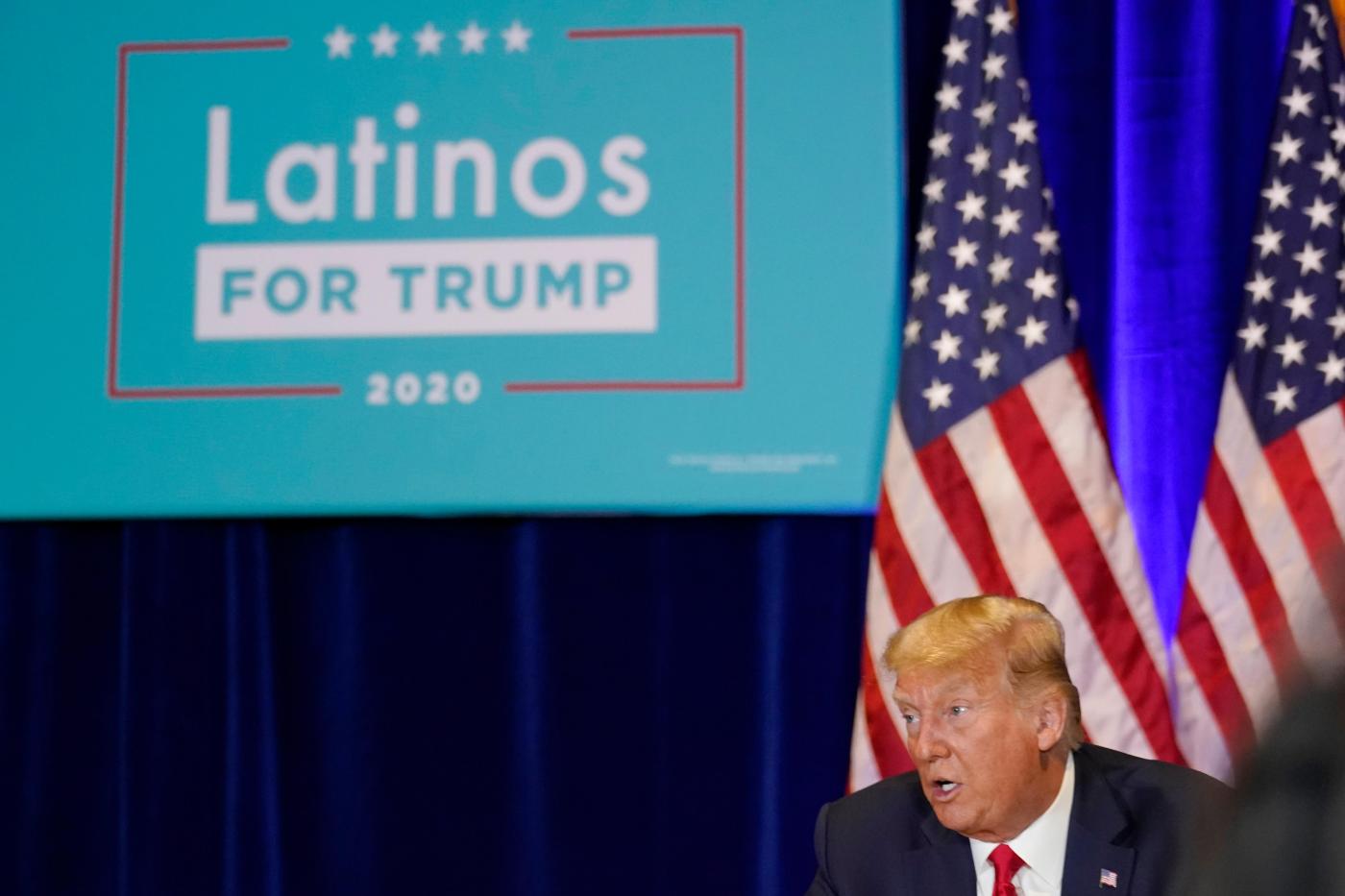 LAS VEGAS — President Donald Trump on Sunday aimed for further inroads with Latinos who could prove vital in closely contested states that could determine the White House race, promoting economic gains they made before the coronavirus pandemic.

Though Trump has made scores of inflammatory and derogatory comments about Latinos, his campaign is growing confident that he has won some support that could help in Florida, Arizona and Nevada, his target this weekend. He hosted a roundtable discussion with Latinos in Las Vegas on Sunday afternoon before a nighttime rally, his first indoors since one in Tulsa, Oklahoma, was blamed for a surge of coronavirus infections.

Winning support from Latinos has been an uphill climb for Trump, whose hard-line immigration policies and sometimes virulent depiction of immigrants have alienated many Hispanics.

In the first moments of his 2016 campaign, he declared that many Mexican immigrants were “rapists.” He has drawn criticism for his tepid response to a hurricane that ravaged Puerto Rico, his polices to separate children from their families at the U.S.-Mexico border and his efforts to dismantle an Obama-era program that allows young immigrants living in the country illegally who were brought here as children to remain in the U.S.

“They understand the situation at the southern border. They want people to come in, and so do I, but they want them to do it legally,” Trump told a small group of supporters in Las Vegas. “While Joe Biden has failed, I have delivered for Latinos.”

There is increasing concern about Democrats that their nominee, the former vice president, has not done enough to court Latino voters. His running mate, California Sen. Sen. Kamala Harris, did little to sway Florida’s booming and politically influential Latino population during a stop there this past week. Biden has not set foot in Arizona or Nevada during the general election campaign, which he has mainly conducted virtually because of the coronavirus.

Trump tailored his pitch to Latinos on Sunday, noting their low unemployment rate before COVID-19 reached American shores and affirming his anti-abortion stance. He again hammered home his recent push on law and order, saying that recent violence in American cities endangered Latinos.

“Sleepy Joe Biden has spent 47 years in politics being terrible to Hispanics. Now he is relying on Castro lover Bernie Sanders to help him out,” Trump tweeted Sunday. “That won’t work!”

Sanders, a Vermont senator who ran against Biden in the primary but later endorsed his rival, took heat earlier this year for a television interview in which he lauded Fidel Castro for a literacy program and asserted that it was “unfair to simply say everything is bad” in Cuba.

Estimates from the Pew Research Center and AP VoteCast show that about 3 in 10 Latino voters supported Trump in 2016 and Republican candidates in 2018. That’s also consistent with long-term trends in party identification among Latino voters, according to Pew.

Like Arizona and Nevada, Florida has a heterogeneous population, but Hispanic voters there tend to be somewhat more Republican-leaning than Hispanic voters nationwide because of the …read more