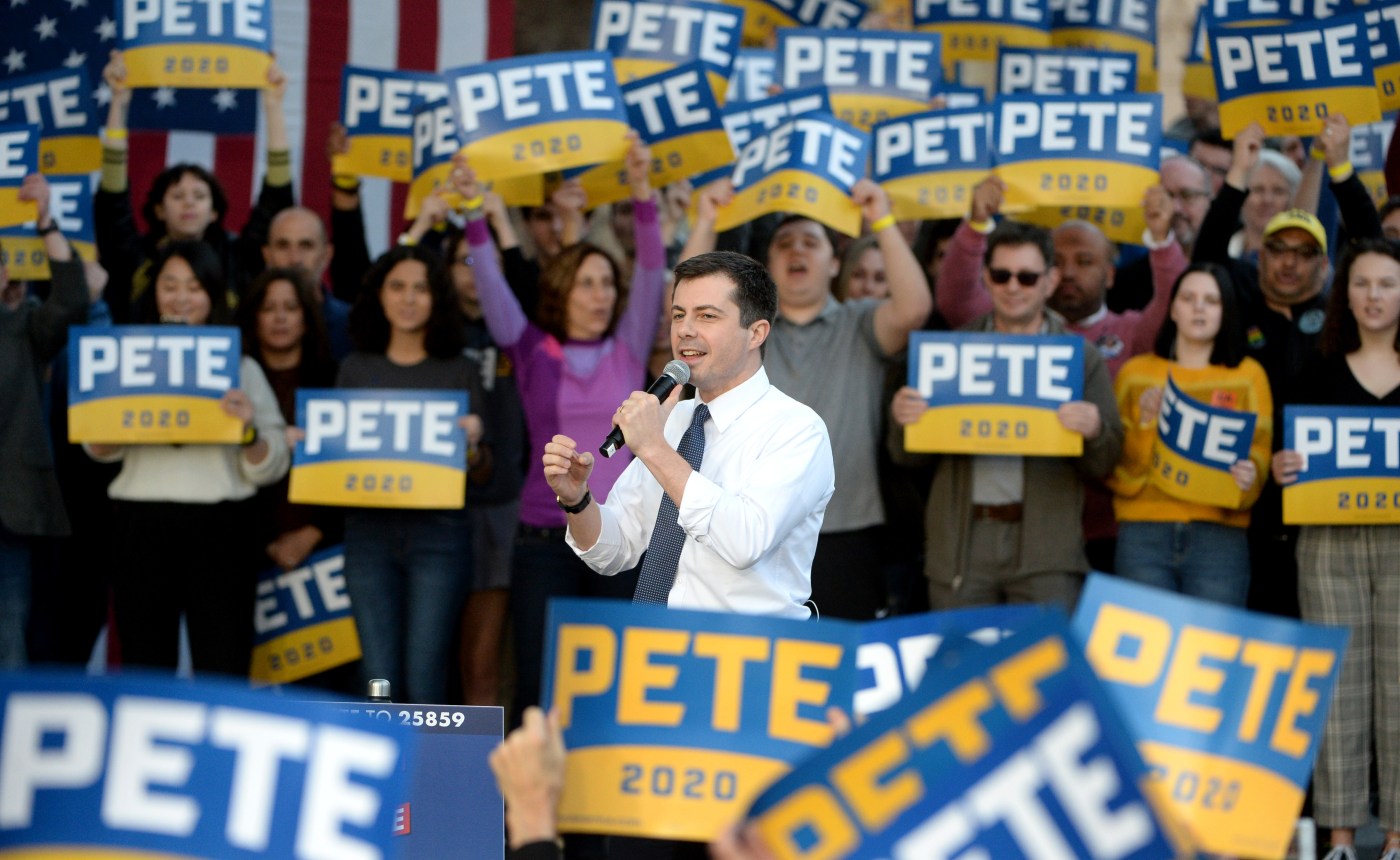 The former South Bend mayor’s trip kicked off a two-and-a-half week sprint to California’s March 3 primary, with several other Democratic White House hopefuls — as well as President Trump himself — campaigning across the state over the next few days.

“So much depends on what happens when the future-oriented, forward-looking, racially diverse, justice-minded state of California has its say,” Buttigieg told several thousand cheering fans at a downtown Sacramento park.

After notching a photo-finish win in Iowa and a close second place in New Hampshire, behind Sen. Bernie Sanders, Buttigieg is hoping that his success in the early states will give him momentum leading up to the Golden State’s primary.

Many attendees said that they were still deciding on which candidate to support and had showed up in part because of Buttigieg’s early strength. And his most diehard supporters were thrilled with his record so far.

“When he first announced, we were like, ‘Pete who?’” said Mark Workman, an Air Force veteran and NASA employee from Mountain View, whose wife Jan carried a homemade Pete sign covered in glitter. “Now we’re totally on board.”

But Buttigieg and the other candidates who are moving on from the first two contests of the primary season will have to prove they can hold their own in the far more diverse states coming up on the calendar — including Nevada, which caucuses on Saturday, South Carolina, which votes on Feb. 29, and Super Tuesday states like California.

Buttigieg’s Sacramento crowd was overwhelmingly white, and he’s struggled to substantially raise his poll numbers among African-American and Latino voters.

A gaggle of other presidential contenders are also headed to California over the next few days, most popping over from campaign trips in neighboring Nevada.

Sen. Amy Klobuchar — who also did well in New Hampshire with a surprise third-place showing — will be in San Francisco for a fundraiser Sunday, although her campaign hasn’t announced any public events.

Sen. Bernie Sanders will headline a rally in Richmond on Monday to promote his campaign’s effort to encourage early voting and organize independent voters.

And President Trump is set to swing through Los Angeles, Riverside County, and Bakersfield for fundraisers and other events on Tuesday and Wednesday.

Trump’s itinerary includes a fundraiser at the Palm Springs-area estate of Oracle chairman Larry Ellison — the most high-profile show of support for the president’s re-election campaign by a major Silicon Valley leader so far. Tickets for the event with the president are going for up to $250,000, according to The Desert Sun, which first reported the fundraiser.

Buttigieg also held two fundraisers Friday at the National LGBTQ Center for the Arts in San Francisco and the University Club in Palo Alto. At the San Francisco event, he was interrupted by three LGBT