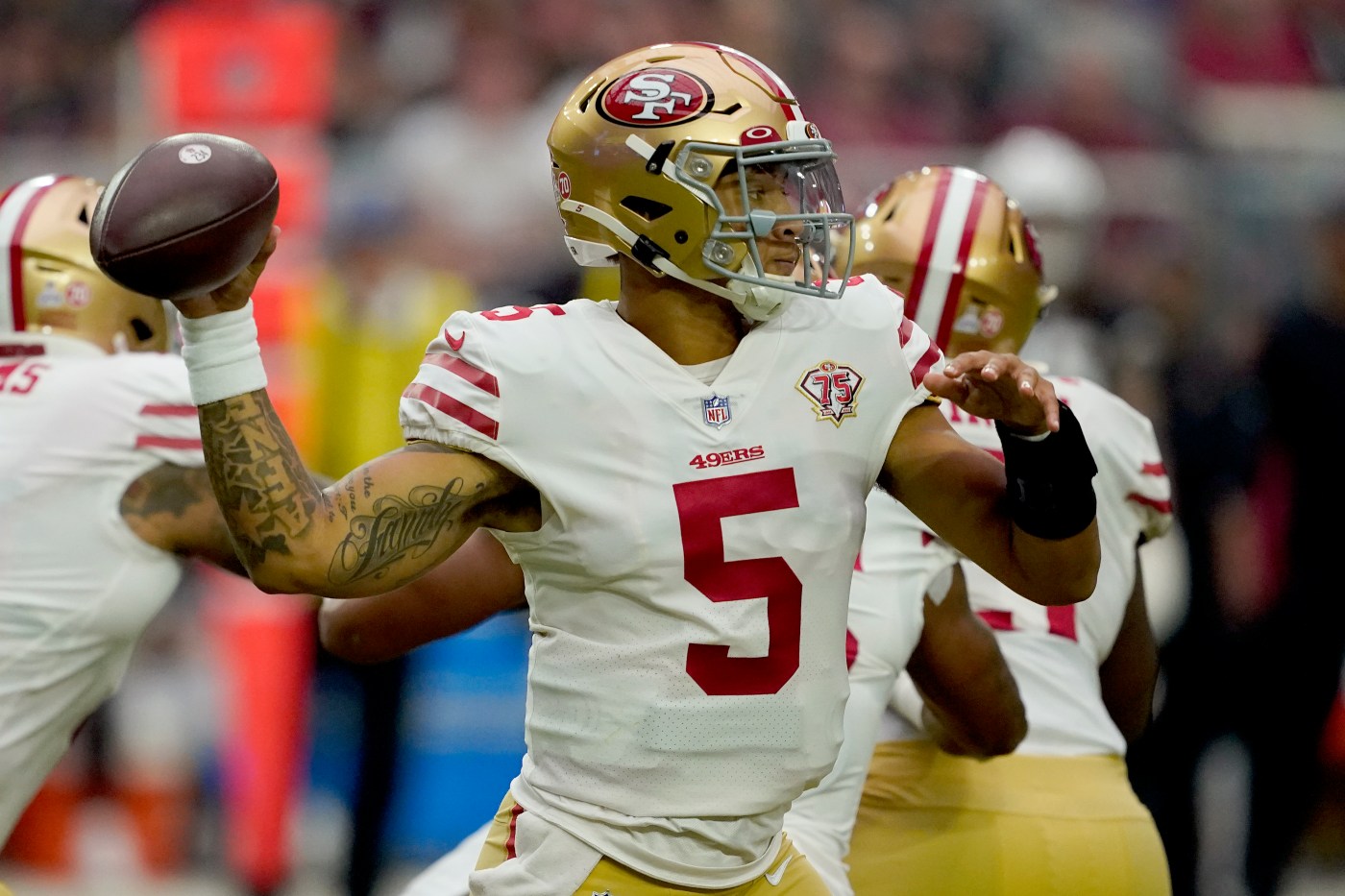 A pack of 49ers fans, fresh off an Arizona boys trip, proposed a question to me as we exited the airport Monday: Thumbs up or down on Trey Lance?

“Thumbs up,” I replied. “But no matter who’s at quarterback, the 49ers have other issues.”

Then we rattled off a few as we walked to our cars, reminiscing about fourth-down (and third-down) calls that failed Sunday to listing off ever-inactive rookies, with almost everything circling back to Kyle Shanahan’s influence.

“Fire him!” said one of the airport gang, whom, I pointed out, was wearing Shanahan’s 2019 model red hat.

No one is getting fired during this bye week. Well, not the coach. Cornerback Buster Skrine got terminated Monday, but that’s irrelevant, as will be the 49ers (2-3) if they don’t reverse a three-game losing streak.

Here are five ways to save and reverse their season, with 12 games to go:

OK, I lied, the quarterback job is a pretty big deal. It just isn’t the cause of their woes, as an incohesive, undisciplined unit. That said, quarterback uncertainty is no way to go through a season.

Yes, I could see Shanahan staying loyal to, if healthy, Jimmy Garoppolo. Cue the stat: Shanahan is 7-28 without Garoppolo starting, 24-10 with him. Garoppolo isn’t healthy, however.

Can a calf injury truly keep this franchise in limbo? Can a sprained knee? So much for insulating yourself at the position.

Lance isn’t an instant classic. He will learn on the job. And he will bring an electrifying element that’s been missing. He just must not run 16 times a game (unless it’s against the Green Bay defense in the playoffs) and take chances with bone-crushing hits.

That sounds very much like a coach ready to move forward with his hand-picked quarterback, as long as it meshes with team needs. And, yes, he does, if healthy, which he is not.

Teammates have confidence in whichever quarterback plays. Fred Warner said of Lance: “When you’re young and taking these shots from big dudes, we’re on the opposite side so we know how that is – admirable.”

There is no noticeable locker-room division. That’s tough to say for sure, when the NFL isn’t allowing media into that culture-defining crucible.

Nick Bosa’s five sacks are the 49ers’ most through five games since Bryant Young in 2005. Bosa is their defensive leader-by-example.

He is playing 70 percent of the snaps, and doing so on a rebuilt knee. He is also transitioning into a subtly candid speaker, with engagements every Thursday and postgame.

The better Bosa plays, the better that will rub off on the defensive front, which is the engine that makes this team go. If Bosa challenges Aldon Smith’s single-season franchise record of 19 ½ sacks, the supporting cast needs to …read more