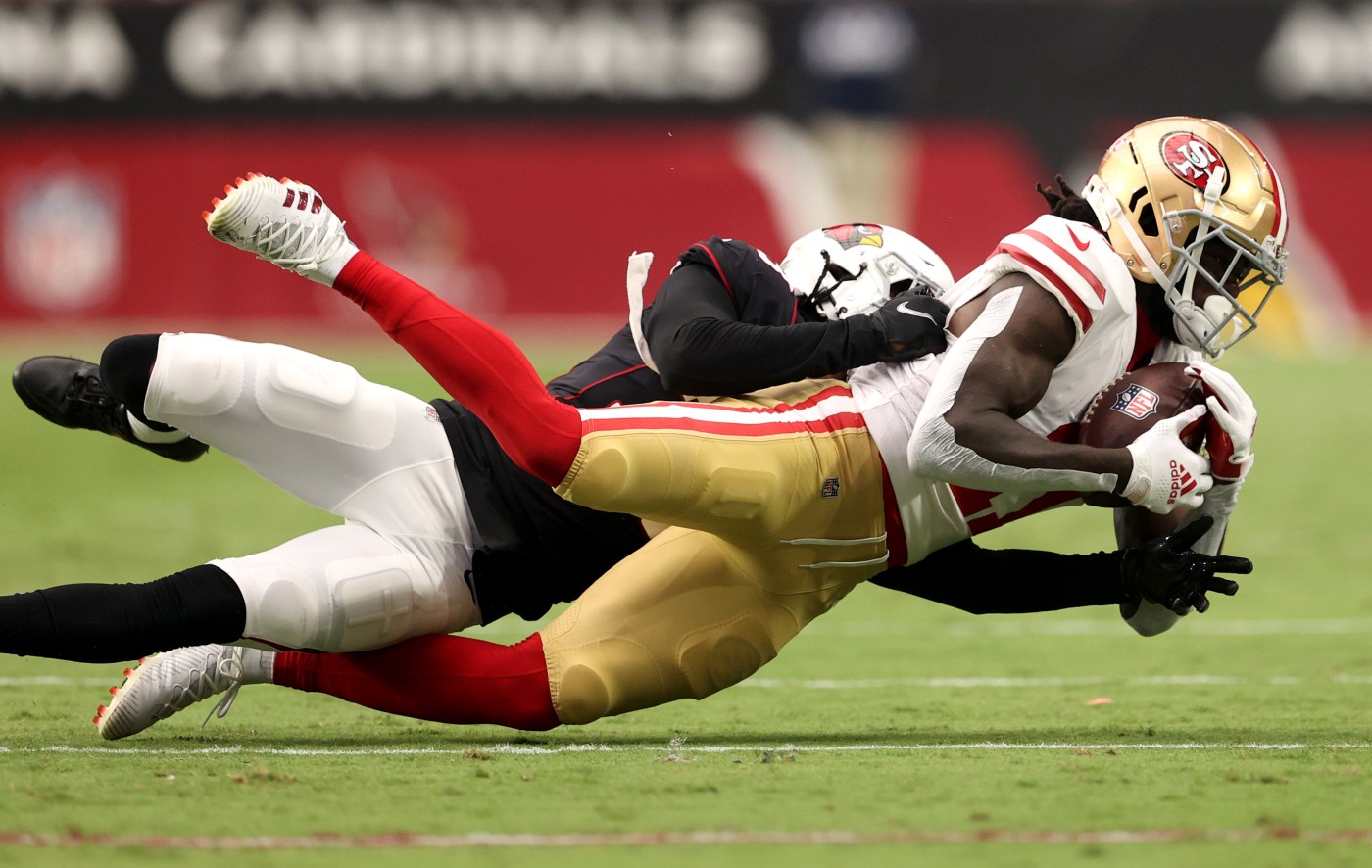 Brandon Aiyuk’s sophomore slump personifies the 49ers’ disappointing start to the season. He has just eight receptions  as the 49ers (2-3) hit the bye on a three-game skid.

A year ago as a rookie, Aiyuk compiled a team-high 60 receptions in only 12 games. General manager John Lynch spent Tuesday morning rewatching each one of those promise-defining grabs.

“That gives you hope, because it’s in there, no doubt about it,” Lynch said Tuesday on KNBR 680-AM. “But it’s time to take that next step. And that’s incumbent on everyone, so we need to get that accomplished.”

Asked by KNBR host Tom Tolbert if Aiyuk must become a bigger part of the offense, Lynce responded: “There’s no doubt about it. He’s a very talented young man and a hard worker, as well. We’ve gone to great lengths to explain kind of what the predicament is right now.”

It’s been a season-long discussion.

It was after the season opener, when Trent Sherfield took prominence ahead of Aiyuk, though they essentially split reps.

And it was after the 49ers’ lost their third straight game Sunday, when Aiyuk caught 2-of-4 targets for 32 yards, all the while practice-squad call-up Travis Benjamin got early looks and Deebo Samuel remained the 49ers’ most popular target.

“I’ve already started to understand in this league that it’s never a steady path to the top,” Aiyuk said Sept. 17, after the 49ers’ final Week 2 practice in West Virginia. “You’re going to have really high moments, low moments. But I think it’s all about how you refocus, rebalance, and get back on track afterward.”

#49ers Brandon Aiyuk is motivated to bounce back at #Eagles after quiet opener pic.twitter.com/d6SPIZxsMS

Coach Kyle Shanahan hasn’t maintained that Aiyuk’s shortened workload or targets aren’t just a reflection of him, but also of what fellow receivers have earned, including Trent Sherfield, Mohamed Sanu and Jauan Jennings.

“The bottom line is we each have to find a way — I’m talking we as a team and Brandon as a player — because for us to get where we want to get, we need his talent and abilities on the field,” Lynch added.

“Having said that, it’s important you earn your opportunities. You do that during the week. It’s not as if Brandon isn’t working hard. For whatever reason, he hasn’t made the strides we expect him to. We probably hold him to higher standards because he has so much in his body”

The 49ers traded up to draft Aiyuk in the first round last year, 25th overall. He produced 748 yards and five touchdowns on those 60 receptions, plus two rushing touchdowns. This year, he has only 90 yards and one receiving touchdown among his eight receptions on 15 targets.

“It’s important for a team to see people earn those opportunities.,” Lynch said. “There’s been really good communication here of late in an effort to try to get that out of him. And he wants it. It’s not as if the guy doesn’t work hard. It’s …read more