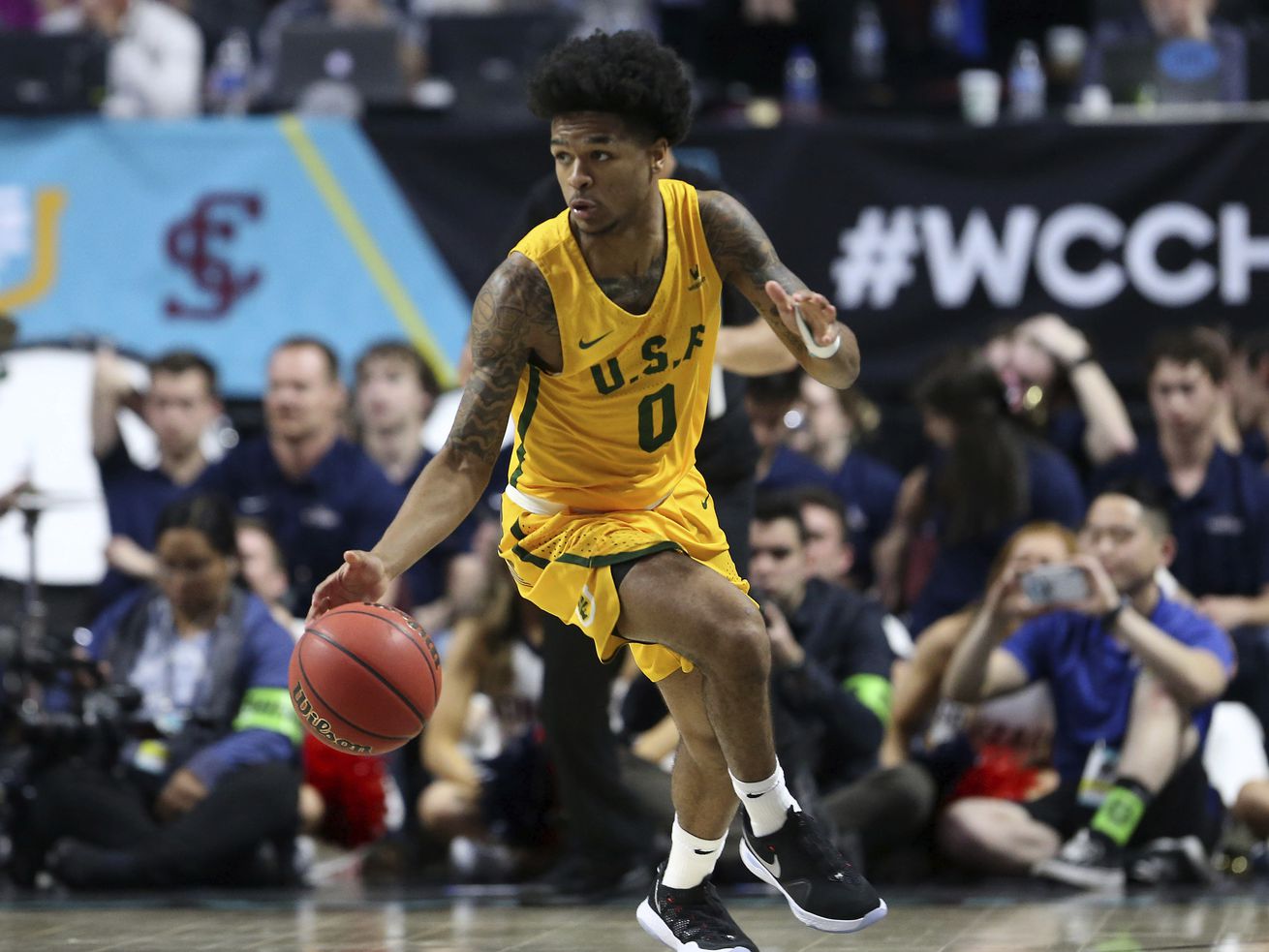 San Francisco’s Khalil Shabazz plays against Gonzaga during Monday, March 9, 2020, in Las Vegas. Two years ago against BYU, Shabazz torched the Cougars to the tune 32 points on 10-for-10 shoooting, which included 6 of 6 from 3-point range. | Isaac Brekken, Associated Press

SAN FRANCISCO — Granted, the West Coast Conference season is still young but the league race is starting to shape up — and heat up.

BYU entered Thursday night sitting in first place before a 110-84 loss at No. 2 Gonzaga. The Cougars suffered their first league loss and they took a bit of a tumble in the WCC standings.

By late that night, BYU boarded a flight to San Francisco for its next challenge against another high-scoring opponent.

In essence, looking at the big picture, second place is up for grabs when the Cougars visit San Francisco on Saturday (9 p.m. MST, CBS Sports Network) at War Memorial Gym. This is a crucial showdown for two teams looking to keep up with perennial WCC champion Gonzaga.

Meanwhile, it’s a quick turnaround for the Cougars, who don’t have much time to think about Thursday’s loss or prepare for a surging USF team enjoying one of its best seasons in school history. The Dons are coming off a 97-73 thumping of Loyola Marymount Thursday at War Memorial Gym.

The Chicago Bears interviewed Joe Schoen for their GM vacancy. Here’s what to know about the Buffalo Bills assistant director of player personnel.

“We had two minutes of grieving and then it’s, we’ve got to get constructive. Our team is good at getting constructive. That’s what you have to do.” — Mark Pope on getting ready for game with the Dons

“We don’t have a choice. It’s coming quick,” said coach Mark Pope. “We’ll jump on a plane and head down there and play against a really explosive offensive team that can cause a lot of problems defensively. We had two minutes of grieving and then it’s, we’ve got to get constructive. Our team is good at getting constructive. That’s what you have to do.”

It’s well-documented that under Pope, BYU has not lost back-to-back regular-season games.

That standard will be put to the test once again.

When asked about his team’s ability to be resilient earlier this season, Pope said, “That’s not a coach-thing. That’s a player-thing. We have a really special group of young men that have filtered in here over the last three years and have bought into what they want to be together.”

So the Cougars are seeking to salvage a split on their first conference road swing of the season against the Dons, who have won nine consecutive home games.

Forward Caleb Lohner, who scored 17 points against the Zags, wants his team to bounce …read more