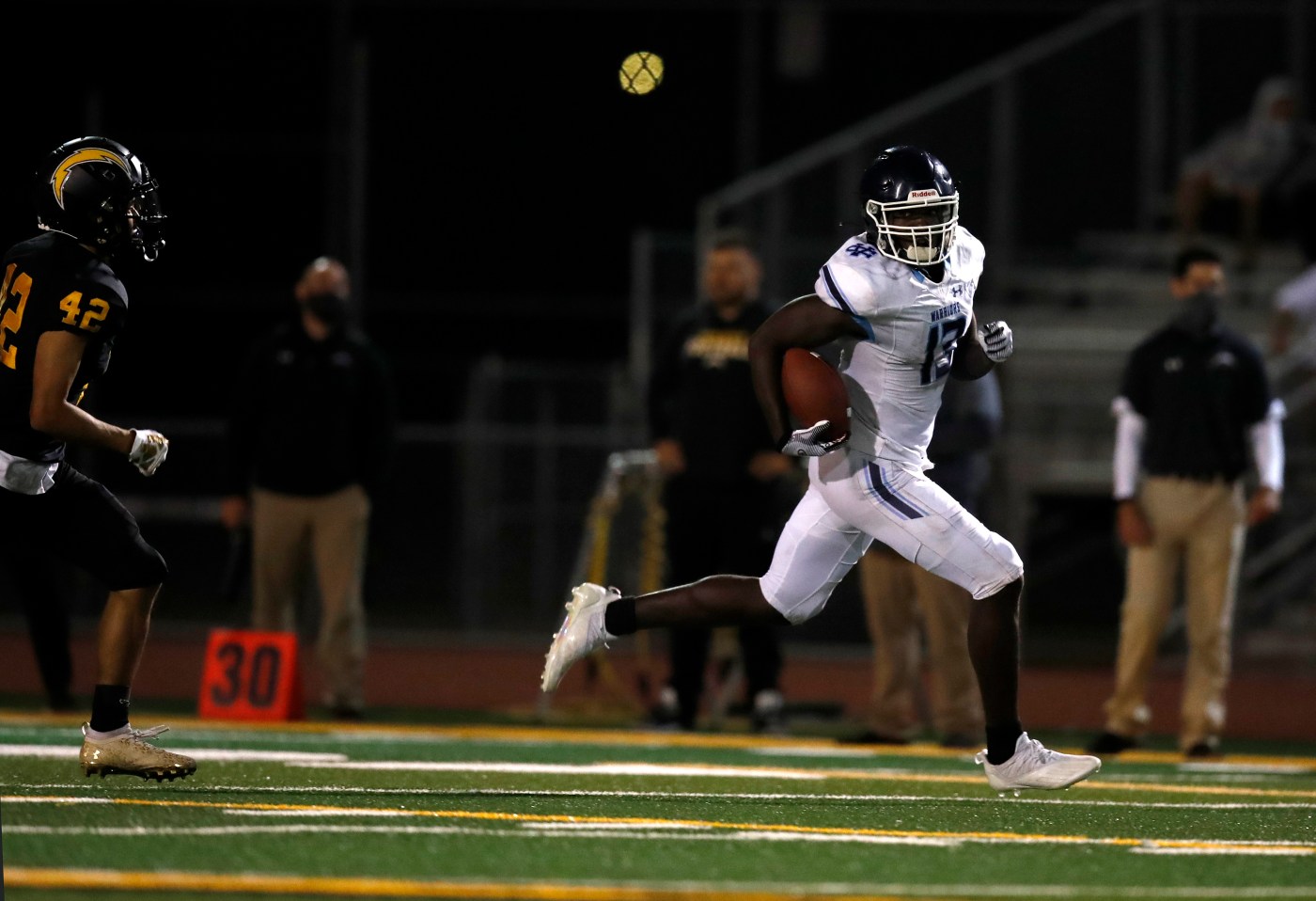 No. 1 Serra (5-0, 3-0) at No. 12 Valley Christian (4-2, 2-1), Friday, 7 p.m.: Before Serra gets to its Nov. 6 showdown against St. Francis, it must clear this hurdle on the road in San Jose against an opponent that features the dynamic duo of WR Jurrion Dickey and QB Jakson Berman. Serra has won five of its past six games against Valley but has lost two of the past three road games in the series — the one win being a 33-26 victory to open the abbreviated season last spring. Serra has been dominant through five games this fall, outscoring Palo Alto, Half Moon Bay, Mitty, Bellarmine and Riordan 205-34. Dual-threat QB Dominique Lampkin has completed nearly 80% of his passes and RB Petelo Gi seems to always be running downhill. The defense has been physical and stingy. Valley’s two losses were both on the road, 42-20 against No. 4 Pittsburg and 41-27 last week against No. 2 St. Francis. — Darren Sabedra

No. 6 California (6-0, 1-0) at No. 3 De La Salle (4-2, 0-0), Friday, 7 p.m.: De La Salle will be without coach Justin Alumbaugh and a number of players because of county COVID-19 protocols, the coach said Wednesday. Alumbaugh, who is fully vaccinated, tested positive after learning of a coronavirus case on the team Monday. The Spartans are coming off a 31-10 victory at Folsom. They have beaten California 18 consecutive times dating to 2007 and most have been blowouts. California has been one of the surprise teams in the Bay Area this season, going undefeated through its non-league schedule and then edging Clayton Valley Charter last week when Teddy Booras connected with Jake Calcagno in the back of the end zone with 15.5 seconds left. When these teams met in the spring, De La Salle won 48-10. In 2019, the Spartans beat California 70-7. Defensive coordinator Nate Kenion will be De La Salle’s acting head coach, but Alumbaugh said he will be in contact with the team from his home office. — Darren Sabedra

No. 7 San Ramon Valley (5-1, 1-0) at No. 10 Clayton Valley Charter (4-2, 0-1), Friday, 7 p.m.: Regardless of what happens in this East Bay Athletic League Mountain Division contest Friday night, Clayton Valley remains in good shape to make the North Coast Section playoffs. But six games into the season, the Ugly Eagles are a bit of a mystery. In their past two games, CVC outgained Monterey Trail-Elk Grove and California by a combined 398 yards (949-551), yet the Eagles split those two contests. They edged Monterey Trail 35-28 and lost to California 19-18. Both games were on the road against good teams, but the yardage difference suggests the Eagles might have wasted some scoring opportunities. Being 3-for-8 on extra points didn’t help. At the same time, San Ramon Valley appears to be playing its best football of the season. The Wolves throttled Foothill 42-0 and Amador Valley 41-13 in their past two games. SRV quarterback Jack Quigley …read more