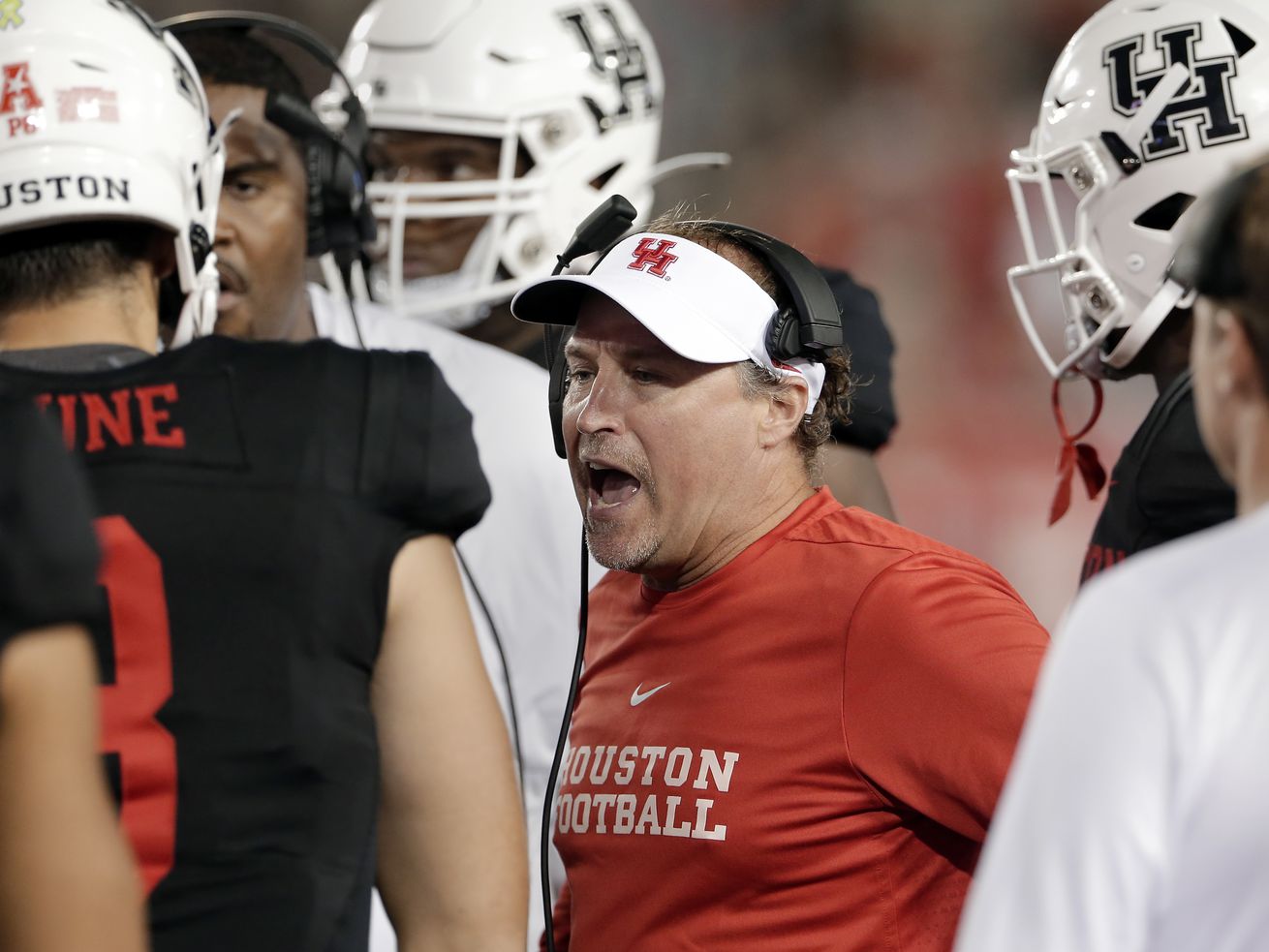 Houston head coach Dana Holgorsen coahces up his team during game against SMU Thursday, Oct. 24, 2019, in Houston. The Houston Cougars are expected to be a tough out for the BYU Cougars Friday in Texas. | AP Photo/Michael Wyke

PROVO — A quick review of the game film of Houston overcoming five turnovers to blast Tulane 49-31 last Thursday told the BYU Cougars all they needed to know about the next challenger to their undefeated record.

The good news, BYU coach Kalani Sitake and a couple of assistant coaches said Monday, is that the Cougars should be closer to full strength than they were in last Saturday’s unsatisfying 27-20 win over UTSA at LaVell Edwards Stadium.

Most notably, starting center James Empey and kicker Jake Oldroyd should be back after Empey missed the last two games with a lower right leg injury and Oldroyd sat out the UTSA game with a bad back.

Starting right guard Tristen Hoge, who has missed the last three games with pneumonia after testing positive for COVID-19 in early September, could be back as well. Fellow offensive lineman Keanu Saleapaga, who has appeared in 22 games in 2018 and 2019, is close to returning for the first time in 2020.

And if things really go the Cougars’ way in practice this week, 2019 leading rusher Sione Finau might see action for the first time since an ACL tear last November that required surgery in January.

“Yeah, we should be better. We should be deeper in different spots,” Sitake said. “But regardless of what happens, whether it is COVID tests or an injury or something that comes up along the way, that is part of the game. We try to get as much depth as possible for this violent game that people get hurt in. We are looking forward to getting guys back.”

Star receiver Gunner Romney, who had four catches for 80 yards against the Roadrunners and is averaging 113.2 receiving yards per game, said Monday he is ready to go after taking a couple hard hits over the weekend that caused him to briefly leave the game.

“I feel good. It is football. You are …read more

Whicker: Walker Buehler’s Octobers belong in an era when people were actually watching