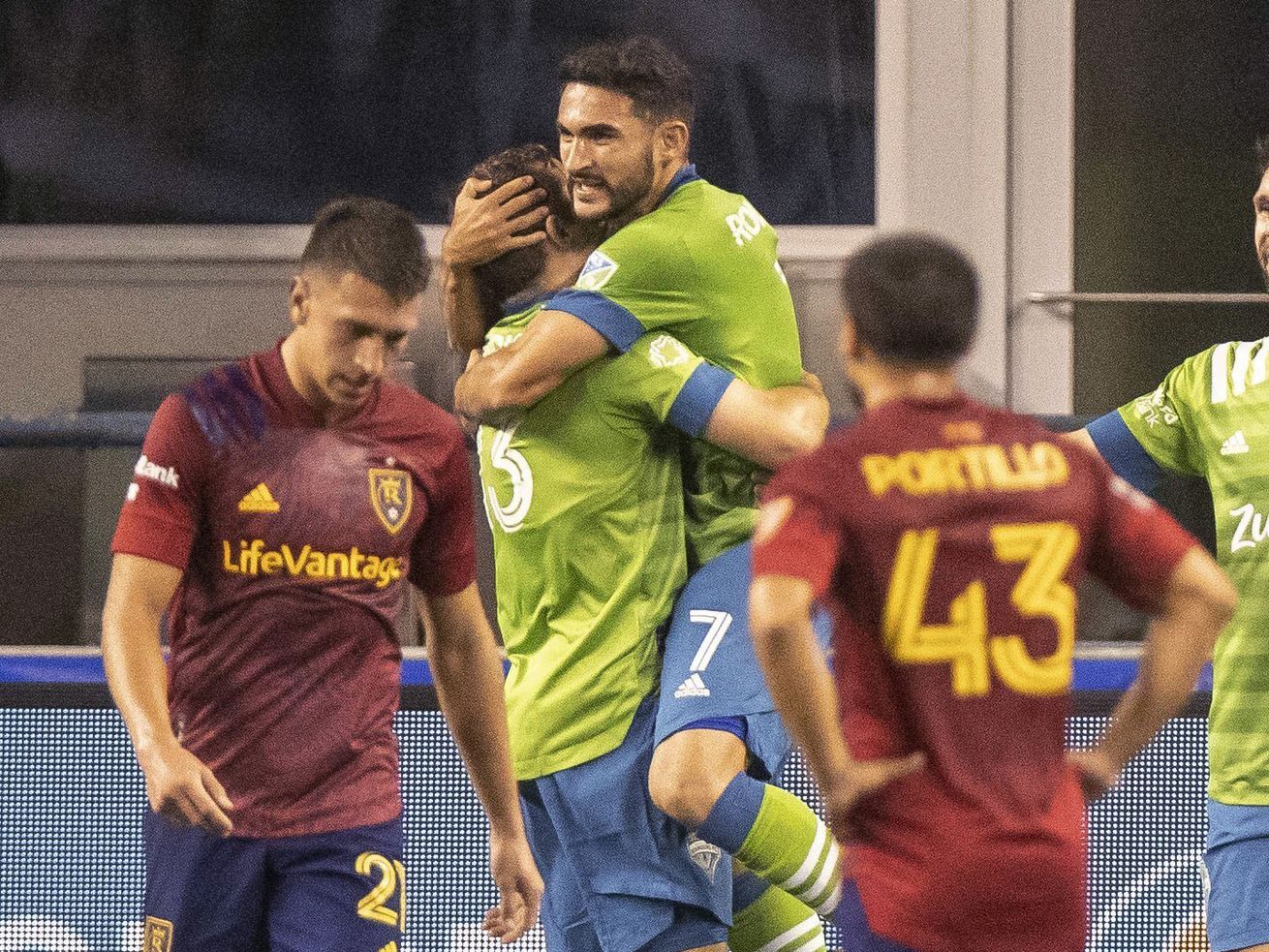 Seattle Sounders’ Cristian Roldan hops into the arms of Jordan Morris who scored against Real Salt Lake during the first half of an MLS soccer match Wednesday, Oct. 7, 2020, in Seattle. | Dean Rutz, The Seattle Times via Associated Press

RSL dropped its second straight game, this one to the Seattle Sounders by a score of 2-1.

SALT LAKE CITY — Coming off Sunday’s loss to Los Angeles FC, and with losses in three of the team’s last six games, Real Salt Lake had hopes of turning things around against the Seattle Sounders Wednesday night.

As center back Justen Glad told the Deseret News, “Everyone on this team hates losing, so coming off a result like that” — RSL lost to LAFC 3-1 — “we want to shift the momentum.”

The Sounders were not the ideal opponent to do that against, however, what with their Western Conference-leading eight wins this season, as well as their status as arguably the best team in MLS.

“In my opinion, (Seattle is) one of the best teams in the league right now,” RSL coach Freddy Juarez said.

Morris netted the game’s first goal, finishing off a cross by Cristian Roldan in the 28th minute of the first half.

28′ Morris finds the back of the net

Morris appeared to score even earlier in the game, a mere 45 seconds in, but that score was called back due to his being offside.

His actual goal capped off what was a strong first half for the Sounders, who largely got what they wanted from their attack and threatened RSL repeatedly.

Toward the end of the half, though, Real Salt Lake started to gain a little momentum and the team was optimistic headed into the break.

“I think we just have to stay patient, disciplined and stay with the game plan. The last 15 minutes we got on the ball more,” midfielder Justin Portillo said in his halftime interview with KMYU’s Samantha Yarock. “We just have to keep working, give each other support.”

Portillo proved a little too optimistic as the second half was more of the same, especially early on. Just minutes after play resumed, Seattle had created multiple viable scoring opportunities, as Roldan and Will Bruin each had point blank shots after going unmarked in the box.

While those attempts proved ineffectual, Gómez’s did not. He broke through in the 60th minute, heading in a corner taken by Nicolás Lodeiro.

At that point, everything seemed to be going in Seattle’s favor, that is until the 68th minute, when Sounders’ defensive back Nouhou Tolo erred, scoring an own goal.