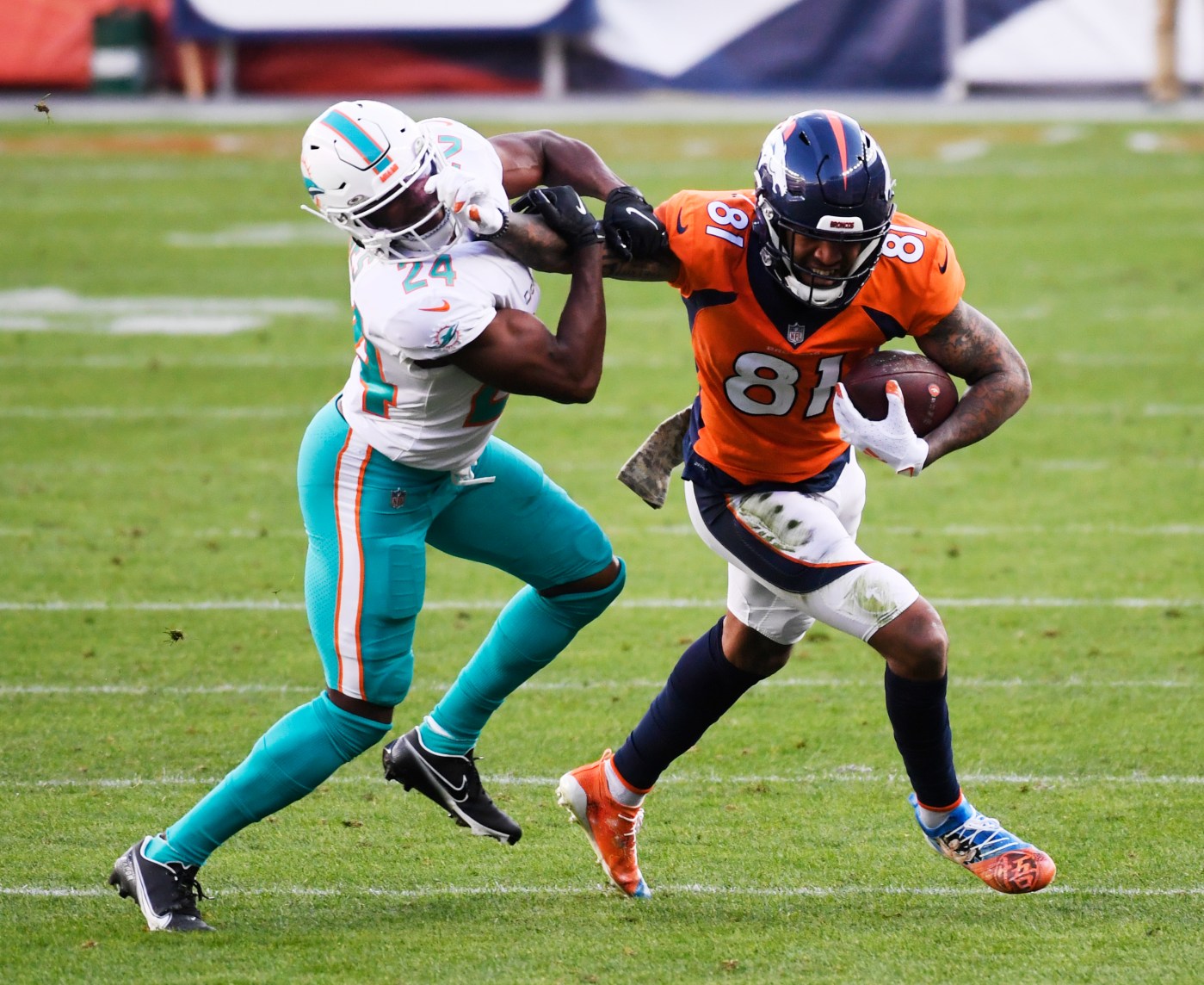 Denver’s 20-13 win over the Dolphins on Sunday wasn’t pretty, but it was the type of gritty victory the reeling Broncos desperately needed following two decisive road losses.

Denver’s defensive front kept Miami rookie quarterback Tua Tagovailoa from getting comfortable, recording a season-high-tying six sacks before forcing his benching in the fourth quarter. The offense found just enough spark, especially in the second half as the run game came into shape for a season-high 189 yards. And the defense held with a last-minute stand as safety Justin Simmons intercepted a pass in the end zone thrown by Ryan Fitzpatrick to seal the game.

The Broncos were going for the clinching score with just over 5 minutes left when Melvin Gordon fumbled at the 1-yard line. Miami recovered and Fitzpatrick drove the Dolphins to the Broncos’ 15 before Simmons’ interception on a 3rd-and-8 throw.

The Broncos deferred to begin the game and then endured another ugly start despite forcing Miami to a three-and-out on the game’s opening possession. Carrying over the poor decision making he’s displayed since returning from a shoulder injury in Week 6, Drew Lock threw an interception on Denver’s third play from scrimmage.

WATCH: Broncos’ Melvin Gordon plows through for a touchdown against Dolphins

Utah football: How opponents fared in Week 4 of Pac-12 play

Lock’s 11th interception of the year came as he tried to force a ball over the middle to Tim Patrick on 3rd-and-10, even as Miami’s Xavien Howard was blanketed on Patrick.

The pick set up Miami for its first score, a precision pass from Tagovailoa to the right corner of the end zone that found DeVante Parker, who burned A.J. Bouye in coverage. The 7-0 lead was enabled after a holding call on Bouye wiped out a Simmons interception four plays earlier.

After another uninspiring three-and-out on their second series, the Broncos bounced back by quickly forcing a Miami punt and then putting together an 11-play, 83-yard drive that was jump-started by rookie KJ Hamler’s 15-yard reception on 3rd-and-10. It was capped by Gordon’s one-yard touchdown run, tying the score 7-7 late in the first quarter.

Miami’s opening drive of the second quarter was nearly single-handedly derailed by second-year outside lineback Malik Reed, who continued a strong first half with a tackle for loss and then a quarterback hit on …read more