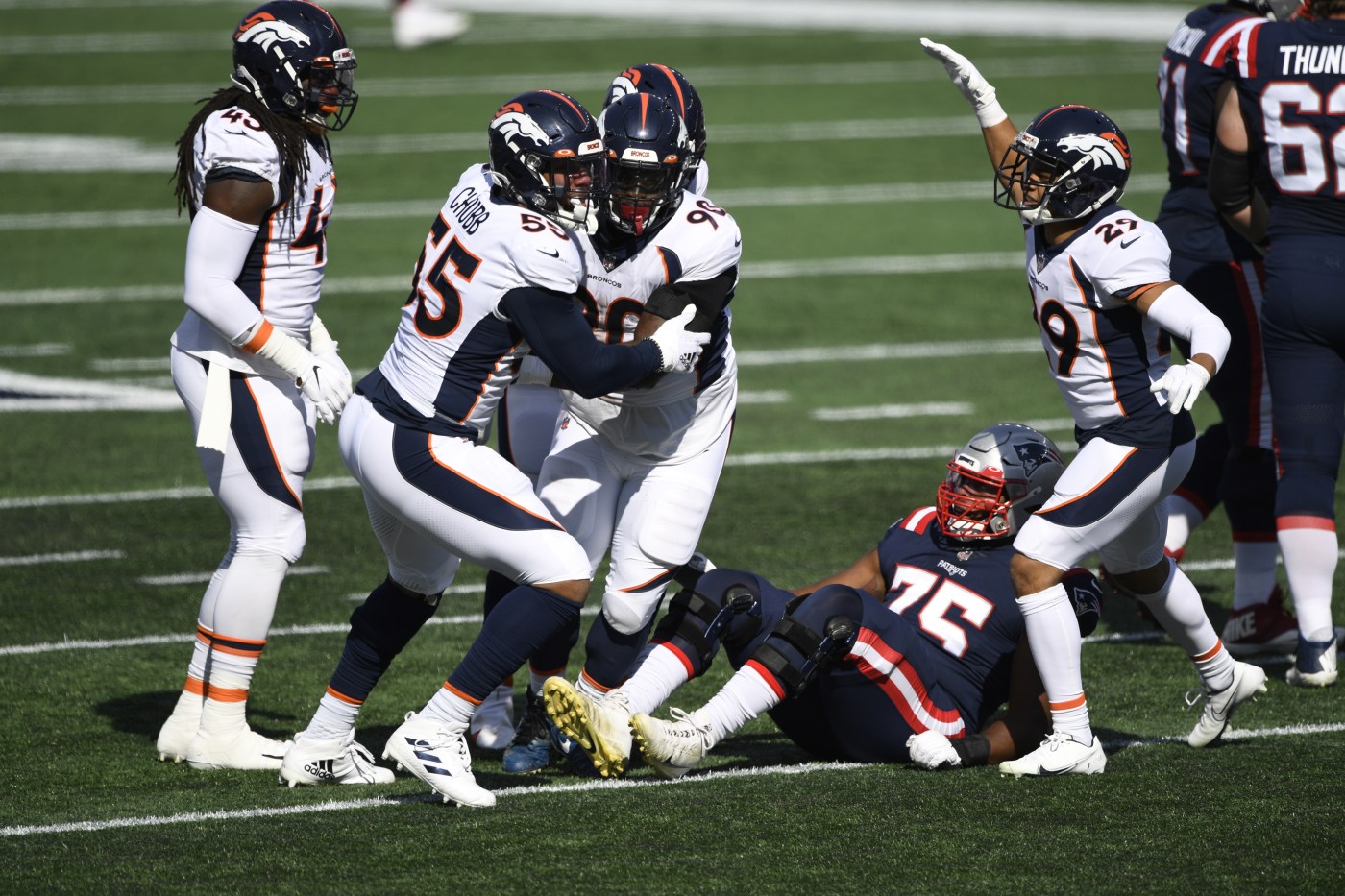 The Broncos nearly squandered a 15-point lead, but the defense made a fourth-down stop with 59 seconds remaining when Patriots’ quarterback Cam Newton threw incomplete.

The Broncos are 2-3 and return home next Sunday to host Kansas City (4-1).

The Broncos never trailed and appeared to be in control with an 18-3 lead. But the Patriots scored on Newton’s quarterback sneak, kicked a field goal and were in position to somehow win after Lock’s second interception.

Julian Edelman threw two passes during the final drive — 22 yards to James White and 16 yards to Newton. From the Broncos’ 24, Newton was sacked by Malik Reed (his second of the day). Two plays later, on fourth-and-10 from the 30, the Broncos sent extra pressure and Newton threw incomplete in 2.25 seconds.

Phillip Lindsay rushed 23 times for 101 yards in his return to the Broncos’ lineup.

After forcing a New England three-and-out to start the second half, the Broncos ate up 9 minutes, 7 seconds of the clock during a 15-play, 83-yard drive. But McManus’ 20-yard field goal and not a touchdown was the end result. The key play was a 35-yard catch by Tim Patrick on third-and-21.

The Broncos had first-and-goal from the 4, but Lindsay gained one yard and was tackled for a two-yard loss. On third down, Lock scrambled for a three-yard gain.

During the drive, left guard Dalton Risner left with a shoulder injury and was replaced by Austin Schlottmann.

After a second takeaway — a forced fumble by cornerback Michael Ojemudia recovered by safety Justin Simmons — the Broncos got a 54-yard field goal from McManus for an 18-3 lead with 37 seconds left in the third quarter.

On the next play from scrimmage, Newton’s pass was tipped by Simmons and intercepted by cornerback Bryce Callahan.

The Broncos went three-and-out after that takeaway as coach Vic Fangio elected to punt for field position instead of sending McManus out for a field goal of 57-58 yards.

New England went right down the field to make it 18-9 with 8:31 remaining but failed on a two-point conversion attempt.

On the ensuing possession, Lock was intercepted by J.C. Jackson, who returned it 30 yards to the Broncos’ 30. But New England settled for a 38-yard Nick Folk field goal to make it 18-12 with 3:23 left.

The Broncos posted their second opening-drive score of the season to lead 3-0. Lock threw 41 yards to Patrick on the drive.

New England had its running game rolling on the ensuing possession, gaining six, two, 12 and seven yards. But on third-and-2, Newton’s pass to the left was deflected into the air by defensive end Shelby Harris. Fellow defensive end DeShawn Williams …read more