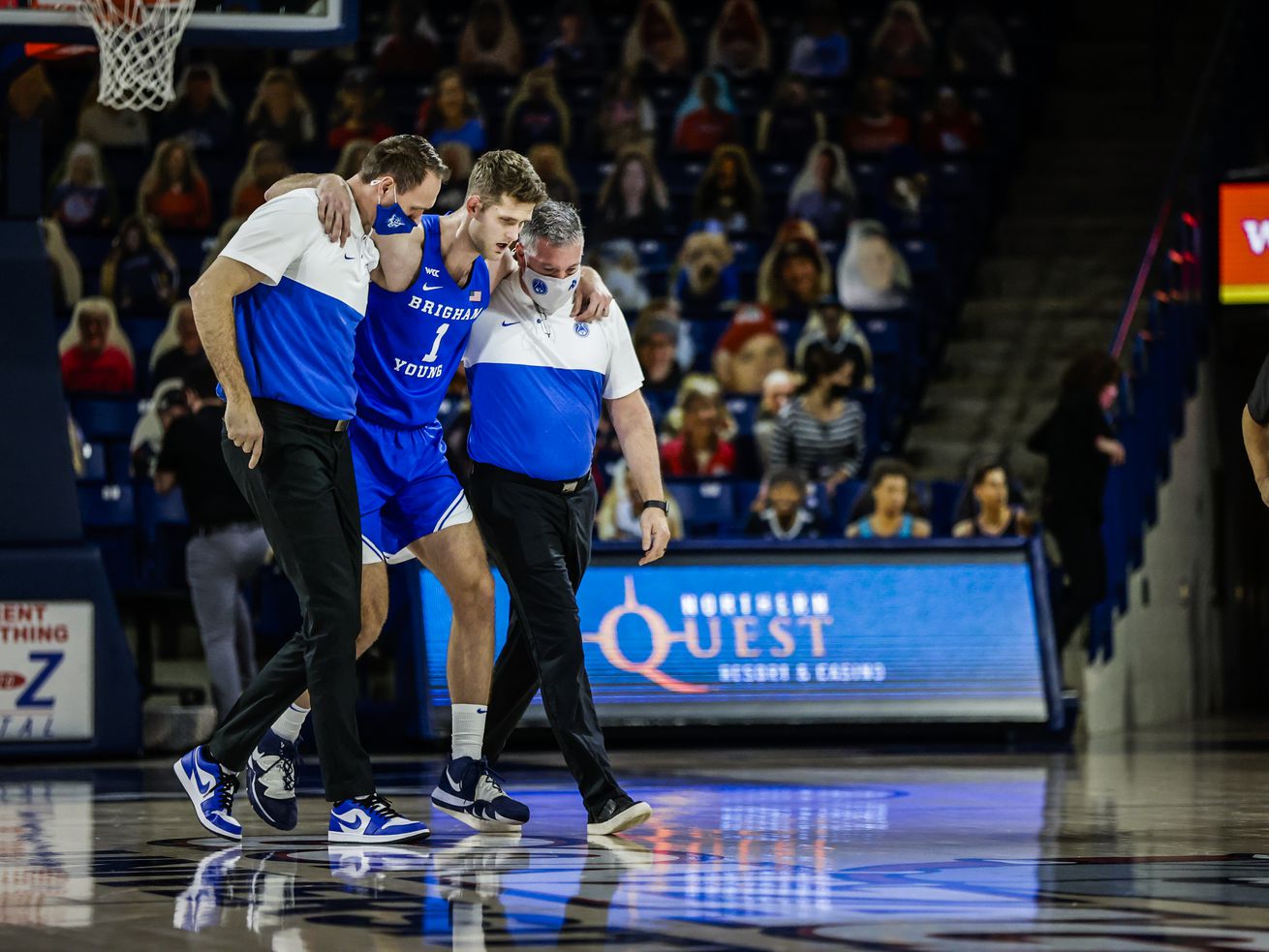 BYU forward Wyatt Lowell is helped off the court after suffering a season-ending Achilles injury in the Cougars’ 86-69 loss to No. 1 Gonzaga on Thursday Jan. 7 in Spokane, Washington. | BYU photo

Coach Mark Pope confirmed Tuesday that Wyatt Lowell tore his Achilles during the Cougars’ 86-69 loss at No. 1 Gonzaga last Thursday.

After working diligently to be ready for the opening game after a major shoulder surgery last summer, BYU forward Wyatt Lowell is facing another major setback with a season-ending injury.

Coach Mark Pope confirmed Tuesday that Lowell tore his Achilles during the Cougars’ 86-69 loss at No. 1 Gonzaga last Thursday.

“It’s how it happens a lot — a noncontact play,” Pope told reporters. “It wasn’t anything explosive. He was just changing directions.”

The 6-foot-10 native of Gilbert, Arizona, suffered a serious shoulder injury during practice in July and subsequently underwent surgery to repair his torn labrum.

But by the time the season tipped off in late November, Lowell was cleared to play. He played in seven games this season and averaged 6.6 minutes per contest. Lowell finished with a total of 14 points and eight rebounds.

“It’s super unfortunate, a really, really tough situation for anybody. But especially for Wyatt, having just barely been getting himself back after this labrum tear surgery,” Pope said. “It’s going to be another mountain for him to climb but he’ll do it well. He’s a tough young man and he’s really focused. He knows he has a really bright future in this game and he’s holding onto all of those things, having to deal with this again.”

Justin Thomas to go on training program after anti-gay slur

“It’s extremely unfortunate. Wyatt’s such a great teammate and a great guy off the court. He’s such a hard worker,” said senior guard Alex Barcello. “Our whole team was with him when he was battling back from a shoulder injury. He finally got back and we were so excited for him. To see him go down is extremely unfortunate. We just want to be there for him throughout this entire process of him coming back off this injury. We just want to let him know that we’re there for him. We’re his brothers and whatever he needs, we’re going to be there.”

Lowell is the second Cougar player to suffer a season-ending injury. In the second game against New Orleans, forward Gavin Baxter sustained a serious knee injury and underwent surgery.

Fortunately for the Cougars (9-3, 0-1), they have a lot of depth on the roster, including a lot of young players that are emerging. Freshman Caleb Lohner scored a career-high 13 points against Gonzaga, and junior Gideon George had 11 points against the Zags.