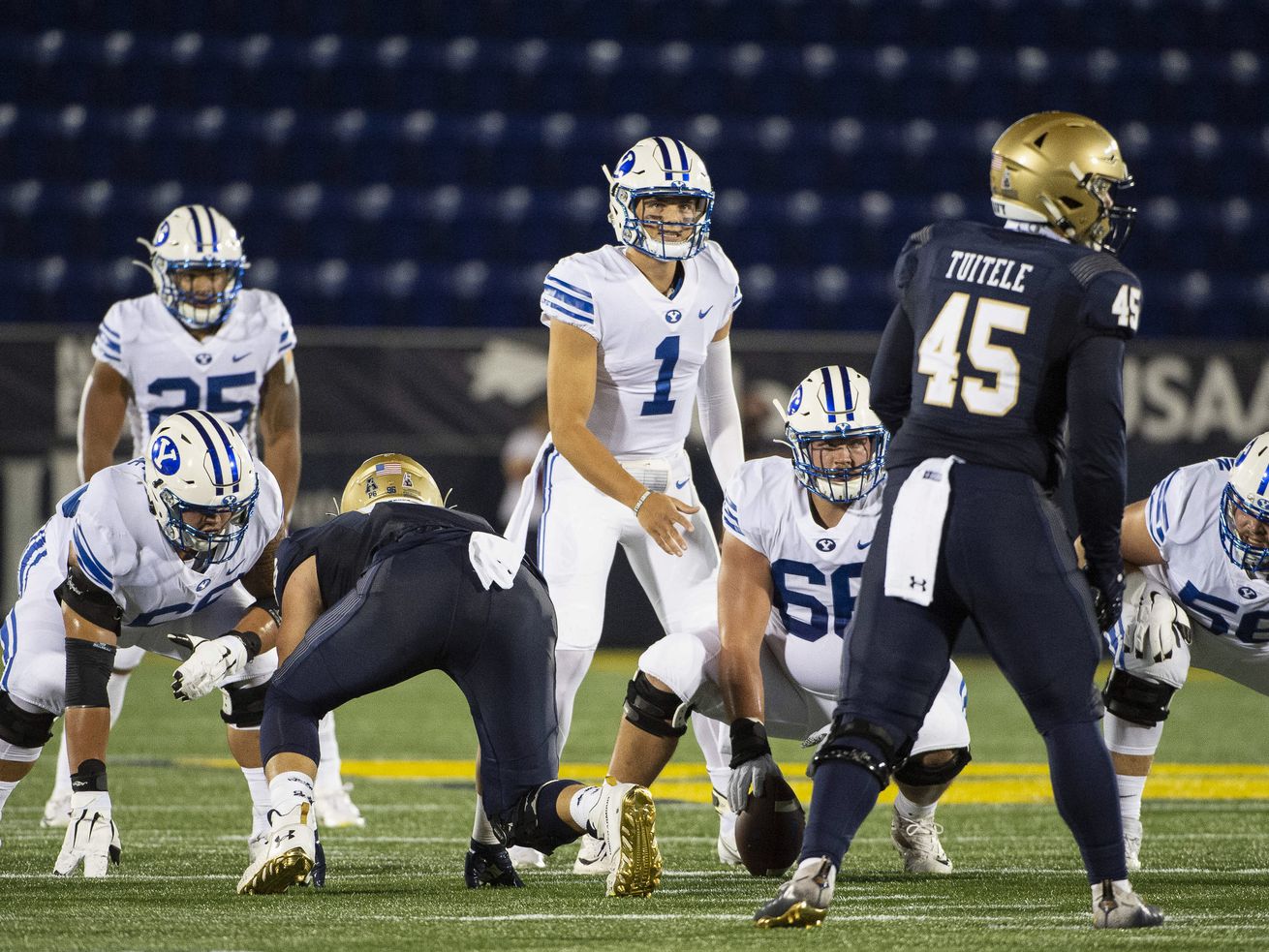 BYU quarterback Zach Wilson (1) looks down field from behind the offensive line as Navy linebacker Tama Tuitele (45) looks toward the sideline during the first half of an NCAA college football game, Monday, Sept. 7, 2020, in Annapolis, Md. | AP

Barrington is smart, big, strong and obedient. He plays hard, does his job, brings intensity, has toughness. When he sprints downfield leading a play, he gets his man and likely one or two others. He grades high.

Barrington, who spent two years as a missionary in Uganda, got his first career start against Navy on Labor Day, a 55-3 beatdown of the Midshipmen. People wanted to make a highlight film of him grading out defenders as Lopini Katoa and Tyler Allgeier ran like antelopes.

“I couldn’t be prouder of Clark, he just does his assignment.” said senior guard Tristen Hoge.

Deservedly so, BYU’s offensive line had high expectations heading into the opener. They have more than 120 career starts among them.

“If the offensive line does their job, we’re going to rush forever. If we have good protection, our quarterback is going to throw forever. That’s what we did, we put it on the offensive line. With that being said, we had some great plays made by our backfield and our receivers tonight. I’m really proud of all the guys.”

Christensen told reporters this past week that Barrington’s performance was no fluke.

“Clark, he’s been a stud since he’s gotten here. But in the offseason too, he was a workhorse,” he said. “He’s with us every day, gets in extra work, getting bigger, faster, stronger, working on technique and that guy is just nasty out in the field. And I think that’s something we really needed as a line unit is just that nastiness, and he’s really sparked it in all of us. And so he’s been great for the line.”

This is where BYU’s trench work at Navy should prove its worth.

It is also where Sitake needs to get consistency out of his program. One big win should be followed by another. No peaks and valleys — or if they come, they don’t result in failure.

Christensen believes his fellow hogs up front are up to the challenge.

“I think especially where we’re very experienced compared to years past, but what I noticed about this …read more