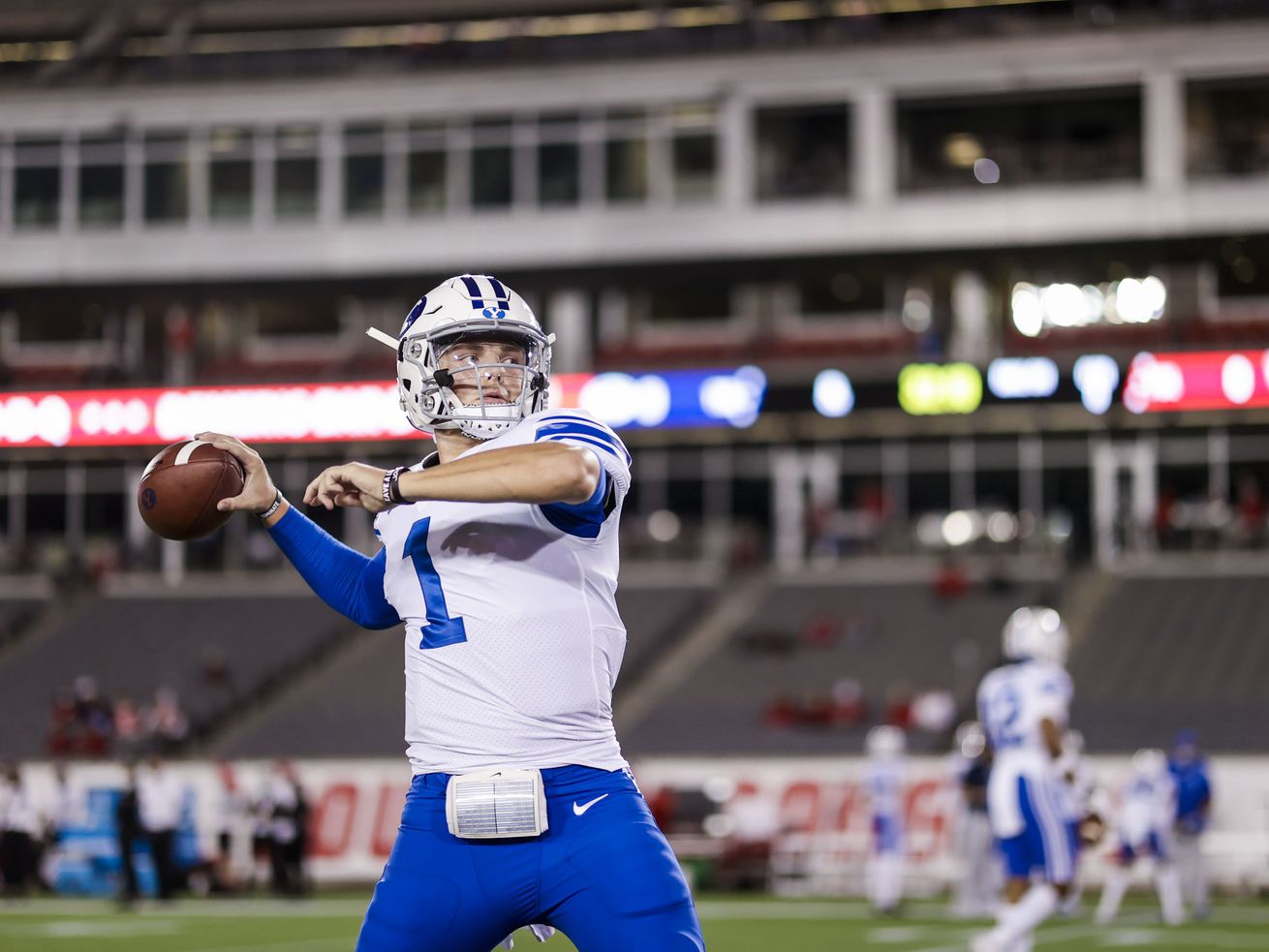 BYU quarterback Zach Wilson goes through warmups prior to the team’s game against Houston at TDECU Stadium in Houston on Friday, Oct. 16, 2020. | BYU

BYU fans were well-represented at TDECU Stadium, cheering louder for their team before the game kicked off than the hometown Houston fans

HOUSTON — For the first time since last Christmas Eve’s Hawaii Bowl at Aloha Stadium, BYU’s nationally ranked football team played a game with spectators in the stands on Friday night at TDECU Stadium in the heart of Houston.

The stadium normally seats 40,000 with room to add a couple more thousands fans in the standing-room-only section, but Friday saw only 8,500 fans or so as school officials tried to keep attendance to less than 25% of stadium capacity to prevent the spread of COVID-19.

As is their custom at any place in the country, BYU fans showed up and made their presence felt. BYU’s roar when it ran onto the field before the game was as loud, if not louder, than Houston’s. Fans were so spread out, however, that it was difficult to get a feel for the number of BYU fans in attendance, or the percentage of the crowd wearing blue.

Brandon Foster flew in from Florida with his son, Dallas, keeping alive a family tradition of attending at least one BYU road game a year.

“It is going to be awesome. We are so excited. It is not going to be a distraction. We are going to enjoy it.” — BYU defensive tackle Bracken El-Bakri.

“I’m worried this might be our only chance this season,” he said. “We couldn’t miss it.”

Duff Tittle, BYU’s associate athletic director for communication, said BYU was provided enough tickets to take care of players’ families and coaches’ guests and families. Other BYU fans had to go through UH’s ticket office for their seats.

Several BYU players said during Monday and Tuesday interviews that their families, who weren’t able to attend the Troy, Louisiana Tech and UTSA games at LaVell Edwards Stadium the past three weeks, would be in attendance in Texas.

“It is going to be awesome. We are so excited,” BYU defensive tackle Bracken El-Bakri said. “It is not going to be a distraction. We are going to enjoy it.”

Defensive back Troy Warner said the Cougars are grateful for anything they can get in this pandemic-altered season, so the opportunity to finally perform in front of fans is just icing on the cake.

“Yeah, I mean, it has been a roller coaster of emotions,” Warner said. “There was a point in time when we wondered, ‘Are we going to be able to play this year?’ And that was something that kind of worried us. We just continued to have faith and kept our head down and grinded and we knew that at some point the work would pay off. I think that is the reason we have had so much success this year is because of what we did in the offseason regardless of what we were …read more

Kiszla: When are these young Broncos going to stop making excuses and start scoring touchdowns?