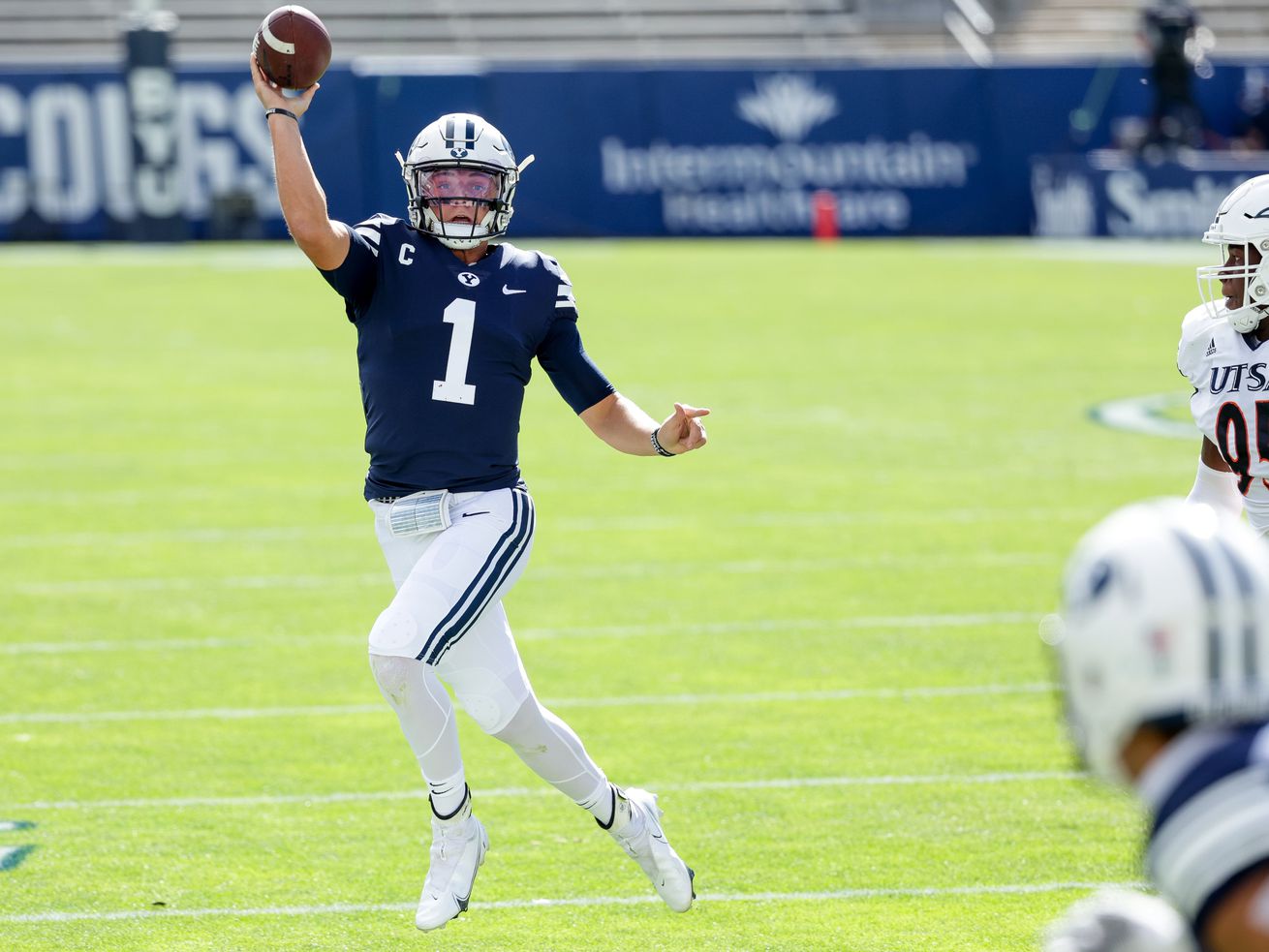 BYU’s offense had its issues in Saturday’s win, although Wilson again showed off some great and critical connections with his top receivers

PROVO — With BYU clinging to a 21-13 lead over UTSA midway through the fourth quarter and confronting a third-and-8 situation at midfield, quarterback Zach Wilson needed a big play to help secure the eventual 27-20 win.

The Roadrunners came with a blitz, forcing Wilson to perhaps throw the ball quicker than desired, targeting Dax Milne — a receiver he’s leaned on a lot this year.

Sure enough, Milne went up and got it, despite tight coverage down the sideline for a 21-yard gain to keep the drive alive. Several plays later Tyler Allgeier was galloping into the end zone to push the Cougars’ lead to 27-13 with just 2:18 on the clock.

“That play was definitely a big one, and I knew they were bringing a lot of pressure in the box, so I knew Zach would need to go somewhere quick,” Milne said. “It was a great throw by him and he put it only where I could get it and we made it happen.”

Milne has been making it happen with Wilson every game played this season, and led all receivers Saturday, hauling in seven receptions for a game-high 102 yards.

But Milne wasn’t alone in this regard.

Gunner Romney proved a dangerous downfield threat as well, hauling in four of his targets for 80 yards, and Neil Pau’u had five catches for 29 yards.

BYU vs. Texas State: How to watch, listen to or stream the game

Pau’u’s first reception resulted in a fumble, although the junior wideout found redemption several minutes later, hauling in a seemingly impossible touchdown grab from four yards out for the Cougars’ first score.

On the play, Wilson was flushed from the pocket and seemingly had no options available before finding Pau’u in the back corner of the end zone. Pau’u reached up for the catch while getting a foot down for an improbable score.

“Really, at that point, the (defender) had his back turned, so I was just trying to throw it up and give Neil a shot in that situation. And he did a great job going up to get it and getting his foot down. That was huge.” — Zach Wilson, on Neil Pau’u’s touchdown

“Really, at that point, the (defender) had his back turned, so I was just trying to throw it up and give Neil a shot in that situation,” Wilson said. “And he did a great job going up to get it and getting his foot down. That was huge.”

As for the trust and chemistry between Wilson and his receivers, it’s been worked on all offseason, with Milne noting as much, saying, “It’s all about working hard together in past years.”

One guy who has seen Wilson’s chemistry with his receivers develop firsthand is BYU linebacker Isaiah Kaufusi, who immediately went into a description …read more